One of the unfortunate byproducts of my newfound sobriety has been an inability to sleep in past 7 a.m. It used to be that a noxious combo of booze and other stuff could reliably knock me out until noon. Now, however, my well-rested, ascetic brain is awoken by the faintest glimmer sunlight — one merciless daybreak at a time.

So when I read a story about what looked to be a grown-up blanket fort last month, I leaned in. The Privacy Pop, a tent that attaches to your bed like a personal cocoon, was created in 2012 by Eric Mear, a USC student with an obnoxious roommate who would wake him up after a long night of partying. “I wondered what I could do to change the situation,” he told the Los Angeles Business Journal back in 2012. “Then I thought about having some kind of tent over the bed.”

I opt for the queen-size “galaxy” variation (Privacy is available in more limited variations on Amazon UK here) figuring a glow-in-the-dark celestial fort might be a key differentiator in my Tinder profile. Assembly is simple enough: Guide four poles through some loops and it’s erected in minutes. The base rests comfortably between the box spring and mattress while doors on both sides can be folded up or zipped down for maximum privacy. A pair of windows, fore and aft, provide moderate airflow, though as my colleague Nick Leftley pointed out when I set it up in our office, “What you have here is a fart chamber”; This only contributed to my juvenile giddiness in anticipation of bedtime.

What is it about tents that’s so alluring to boys, and subsequently still, guys like me in their late thirties? Camping has long been considered a right of passage for the American man. Leaving behind the stresses of normal life, the sun becomes his alarm clock, a fire his kitchen and a tent his makeshift abode. “Surviving in the outdoors starts with knowing what to be prepared for,” wilderness expert Buck Tilton explained in Boys Life Magazine. “Most importantly, you need to be able to build a shelter to stave off wind, rain and snow, and to keep your body heat trapped where it belongs: near your body.” 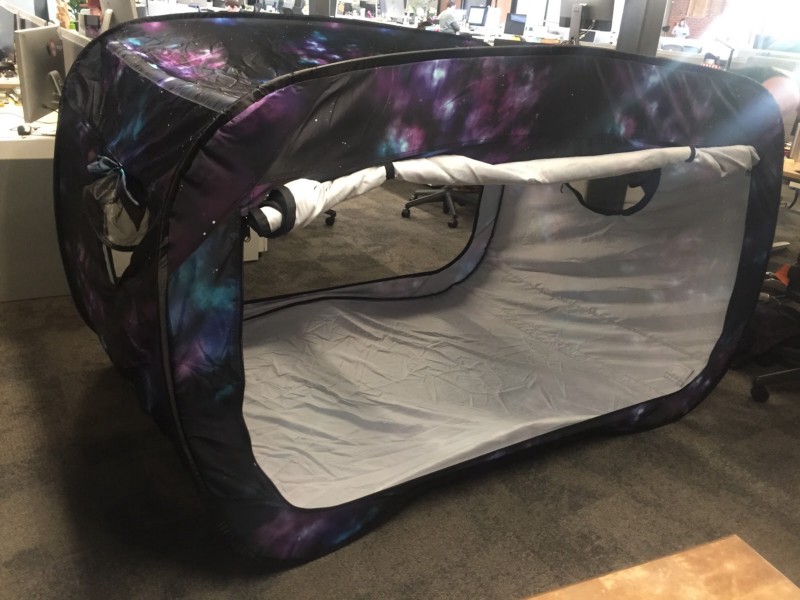 From a biological perspective, explains David Sobel, author of Children’s Special Places: Exploring the Role of Forts, Dens, and Bush Houses in Middle Childhood, forts are likely recreations of the womb. “It’s like the chrysalis out of which the butterfly is born,” he tells me. “A protected space from which the self gets birthed in adolescence.”

We all have a vestigial desire for enclosed spaces, Sobel says, which dissipates at puberty but never goes away completely. For example, he explains, Swedish home design often has beds built into alcoves. “It’s inherently appealing when you find a bed that’s inside a small space that you can enclose completely.”

That’s because, as Jaclyn Lafer, a psychotherapist and early childhood specialist, tells me, “Small spaces feel more manageable because they’re containing. A tent-like space is the ultimate example of this because you can see everything you need to see and feel wrapped up and protected.”

And yet, I awaken with moderate claustrophobic angst following night one in the Pop. Thankfully, this is alleviated by simply folding one door open. The other one, facing the window, remains zipped shut, to which I credit sleeping in till 9 on Sunday morning — the first time in years. 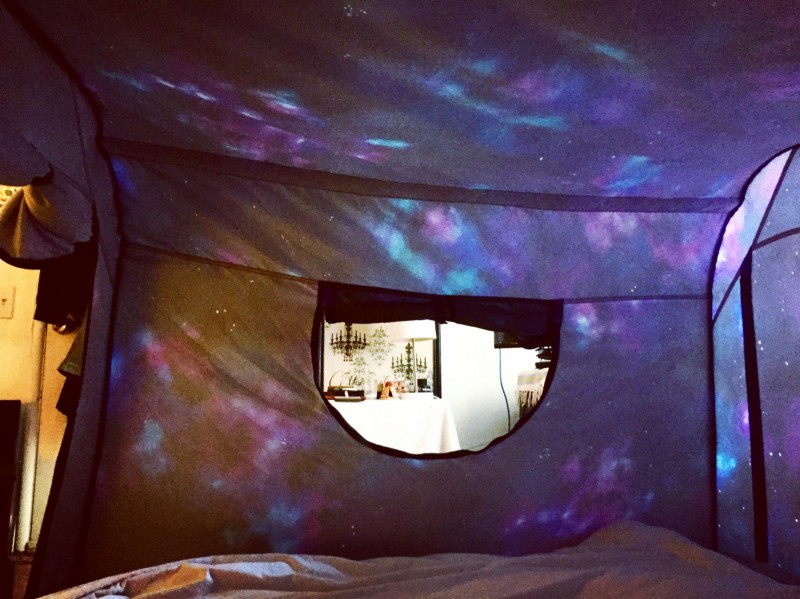 “I see this having value for several different types of situations,” explains Michael Breus, AKA “the sleep doctor” who runs an insomnia clinic for adults and children. “Think college dorm room, kids who share a room, or any situation where there are more than 2 people and one is trying to sleep.”

“This was a huge improvement to my quality of life and gave me a space of my own,” explained Cody A. Williams, a deployed soldier with limited personal space. “Worth every penny,” agreed K. Sikors. “Bought this for deployment and it has been the best purchase I’ve made to help me get through living with 12 other people.”

But mostly, it’s the lure of the boyish nook. Speaking of which…