You probably have a vague idea that your semen contains a few things besides sperm, but you might be shocked at the extent of that mysterious “other stuff” category. In fact, your special sauce contains a laundry list of ingredients, each with its own important function.

The production process begins, not surprisingly, in the testes, where sperm is created. Once a man becomes aroused, mature sperm move on from there — 200–500 million of them for each ejaculation — and travel up the vas deferens tube to the seminal vesicles, which are located in a picturesque spot above the penis and directly behind the prostate. According to Muhammad Mirza, medical director of Allied Medical and Diagnostic and a specialist in male reproductive health, this is where approximately 70 percent of the components of semen are created. They include:

Fructose: The naturally-occurring “fruit sugar” found in plants, honey, corn and the human body. According to Mirza, “You can imagine it being like an energy provider [for the sperm on their trek].”

Enzymes, amino acids, flavins and other proteins: “Proteins are the building blocks of the body,” says Mirza. “Our entire body is water and proteins.” In semen, these particular proteins “provide the force and the chemical ingredients [necessary] to penetrate the wall [of the ovum].”

Phosphorylcholine: This is a chemical that helps with fertility, largely for the same reasons as the enzymes etc. mentioned above.

Citrate (which creates Vitamin C): Citrate contains antioxidant properties that help with the quality of the sperm and make them more robust (some studies have even shown that increased vitamin C helps men with infertility). Forget that urban legend that semen contains as much vitamin C as an orange, though: Mirza says the amount is actually very small.

Prostaglandins: “These provide a variety of chemical processes during the fertility process,” says Mirza. Although some sources claim that this includes suppressing the immune response from the female body toward the invading foreign semen, this is an idea Mirza refutes. “It isn’t a routine phenomenon for the [female] body to attack the seminal fluid, because that’s the normal physiology,” he explains. In other words, there’s no natural immune response to sperm from the female body, as this would — literally — be completely counter(re)productive. While the full role of prostaglandins is the subject of debate, it’s believed to play a role in erections in men, and has been used to treat erectile dysfunction. 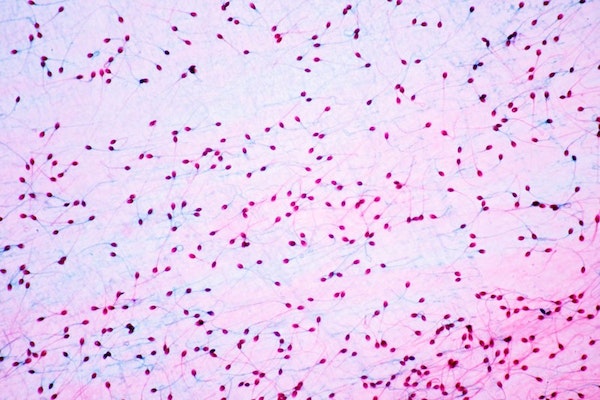 The next rest stop along this reproductive freeway is the prostate, better known as the motel that gives the sperm their pool to swim in. About 25 percent of the end-resulting ejaculate is added at this stage, mostly in the form of a milky-white fluid. While some ingredients from here are similar to those added at the seminal vesicles, there are a few other very important contributions:

Acid Phosphatase: Another substance that helps provide the right kind of chemical environment. In the case of sperm, this means ensuring that the pH level of the semen is slightly more alkaline — and therefore oxygen-rich — than your blood. This is also where the semen gets its taste from: While the fructose may give it a slight sweetness, the generally more bitter taste of semen is due to its alkaline composition, as opposed to acidic compositions, which taste sour.

Fibrinolysin: This is a chemical “associated with mobility,” according to Mirza, which helps the sperm get on their way.

Prostate-Specific Antigens: “These don’t provide any specific purpose within the [semen itself], but [the amount of Prostate Specific Antigens are] a marker of the health of the prostate gland,” says Mirza. “If someone had prostate cancer, they would have higher markers.”

Zinc: This is a very important component for a healthy sperm count, and zinc deficiency is closely associated with male infertility. Foods high in zinc include beef, shrimp and especially spinach, so going a little Popeye now and again can help boost more than your muscles.


The final stop before taking the exit ramp is at the the bulbourethral glands — pea-sized structures that help lubricate the urethra and remove any lingering acidic urine — where a small contribution of materials is added. Although less than one percent of the final composition comes from here, their contribution is extremely important, especially to the ejaculate’s familiar physical consistency:

Mucus and pre-ejaculate: While neither sounds terribly sexy, these are vital for infection prevention and mobility, and are largely responsible for semen’s texture.

Galactose: “Your cells are working 24/7, even when you’re sleeping […] it’s a nonstop process that lasts 60, 70, 80 years — a continuously working machine,” says Mirza. This is also true of your semen, too, and galactose is what keeps this process — known as the metabolic cycle — running. Note: This is not to be confused with Galactus, the planet-devouring nemesis of the Fantastic Four.

Sialic acid: “It’s almost like an anti-inflammatory agent,” says Mirza, adding that he thinks of it as “nature’s aspirin.” Its role in ejaculate isn’t completely understood in the scientific community, but it may be a signal to the uterus that sperm have arrived, since there is an agent inside the uterus which detects the presence of sialic acid. It may also play a direct role in embryogenesis (cell division in the embryo), although it’s unclear how that would work. What is known is that a 2002 study on mice, which involved eliminating sialic acids in the body, resulted in the death of a pregnant mouse’s embryo. So it’s probably pretty important.

After the bulbourethral glands, it becomes less a set route and more a Choose Your Own Adventure book. Nature provides your sperm with a variety of tools to help them on their journey, but whether that’s to fertilize an egg or go directly into the shower drain is largely up to you.