Imagine this: You’re in the audience of the 16th-century edition of Italy’s Got Talent. Some guy from some small village plays a sweet lute riff. Maybe Michelangelo paints a sweet-ass ceiling live. Finally, out struts Vincenzo Cervio, holding a giant fork with a roasted goose joint on it in one hand, and a knife in the other. You know how it is with these novelty acts — the stunned silence when they walk out. A couple of audience members laugh. The judges exchange a look, as if to say “Questo ragazzo?” (Roughly translated: “That friggin’ dude?”)

But, of course, Cervio slays. This isn’t just meat carving, it’s a Cirque du Soleil-level balancing act — because Cervio doesn’t carve on a plate, Cervio carves in the air, using an ultra-sharp knife to slice the goose as he holds it aloft. And he does so with such speed and precision that the meat delicately lands on the platter below in a perfect pattern, overlapping but not too much, and still oven-hot and ready to eat. The crowd goes wild. Roasted goose for everyone!

Obviously, Italy’s Got Talent didn’t exist in the 1500s (or if it did, some dummy wiped the tapes). Cervio, however, was real, and he literally wrote the book on meat carving, 1581’s Il Trinciante (“The Carver”). His tome, the first extensive one on carving, details Cervio’s fork-in-the-air technique, as well as his condescension to those who would be so plain and untalented as to carve meat on a plate. As Margaret Visser put it in her book The Rituals of Dinner, “No carver worthy of the name, in Cervio’s book, cut up meat on a dish.”

But while Cervio was certainly one of history’s fanciest meat carvers, he also wasn’t that special. Men had been cutting meat since they realized they could digest it; Cervio was just the first one to write a book about it. And on the eve of Thanksgiving, the holiday when men are most likely to reclaim their historical position as family meat distributors, it’s time to look at the meat-carving men who came before Cervio (and your not-quite-as-talented Uncle Walter). 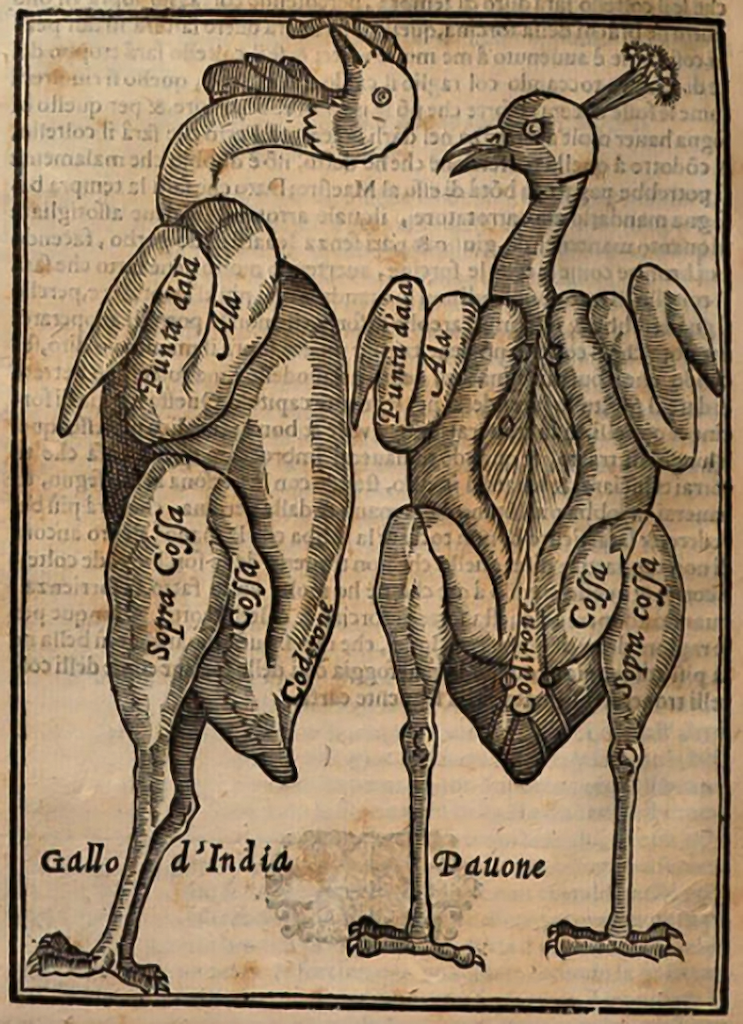 In her aforementioned book, Visser discusses how the earliest carving rituals weren’t about showmanship as much as a combination of celebration and really needing the fridge to be invented. She cites the pre-1500s Native Americans of South Dakota who hunted far from their homes as an example. After a kill, Visser writes, they would carve up the animal and have a celebratory meal of the bits that would go bad the quickest — heart, liver, kidneys, etc. — before carrying the rest home.

Other than eating those fresh giblets, the art of carving the Thanksgiving turkey isn’t all that different. In fact, the whole Thanksgiving turkey experience is one of the most primal rituals we have (once you put aside the whole “buying it at the grocery store” thing). It’s the rare time when we gather together to be thankful for our meat instead of just shoving it down our throats.

There’s another way in which our Thanksgiving carving echoes older carving traditions, too — that the carver has the power to decide who gets what cuts of meat. It might sound like a joke, but as anybody who’s jealously watched a Thanksgiving turkey leg go to an older relative knows, the meat you’re given is a status symbol. (Side note: I wish I lived in a world where people carried around cool cuts of meat instead of buying expensive clothes and cars.) And when meat is harder to come by, the status denoted by the cut of meat you’re given can have serious ramifications. For example, the distribution of the best cuts of meat in ancient Greece could be so attached to social hierarchy that, Visser notes, it could become deadly:

The slight to one’s honor which could be suffered through getting a portion of meat beneath one’s due can be represented by the rage of Heracles when, after the completion of his Labours, he was invited to dinner but served a “lower” helping of meat than those given to the three sons of his tormentor, Eurystheus. He slew them all.

So it’s unsurprising that the art of carving became a strong symbol of power by the 1500s in Europe: the power to draw the attention of the gathered diners, and the power to give them their food as the carver saw fit. Consequently, the art of carving was considered a must for the European nobleman for many years. It was one of those sleights of hand that the rich are so great at: Even though the nobleman wasn’t necessarily doing the work of the hunt, he still got to take credit for the animal’s kill by doing the carving. 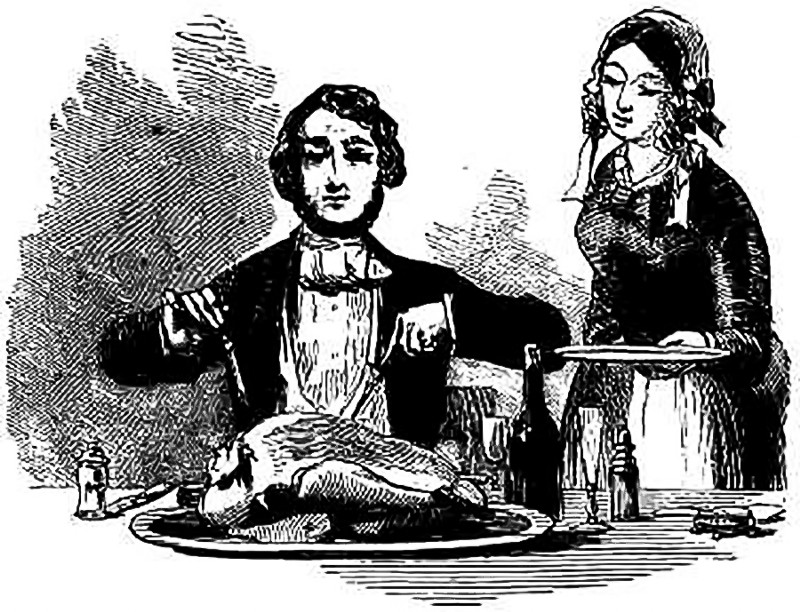 That said, only a couple of centuries later, carving had started to lose some of its shine. It slowly slipped down the list of “must-know skills for noblemen,” and eventually, it fell off the list entirely. It became more common for servants or women to do the carving. Or as a late 1800s issue of Good Housekeeping put it, “It is pleasant to see a woman carve, if she does it deftly” — although the same could probably be said for men, children or dogs. By 1891, carving instructions looked more like this version from Mrs. D. A. Lincoln’s book Carving and Serving:

Never stare at the carver. Remember you are invited to dine, not to take a lesson in carving. Appear perfectly unconscious of his efforts; a glance now and then will give you sufficient insight into his method. There often seems to be an irresistible fascination about carving which silences all tongues and draws all eyes to the head of the table. The most skilful carver will sometimes fail if conscious of being watched. With a little tact the hostess can easily engage the attention of her guests, that the carver many not be annoyed.

Basically, says Lincoln, treat your carver like he’s some sort of meat Medusa; compelling, but deadly to stare at. In 1922, Emily Post gave a subtle, etiquette-appropriate snub to tableside carving at fancy meals as well, noting, “A certain type of man always likes to carve, and such a one does. But in forty-nine houses out of fifty, in New York at least, the carving is done by the cook in the kitchen.”

Of course, all of these rules go out the window on Thanksgiving. Just look to Norman Rockwell, that bastion of American normalcy, placing the family patriarch at the head of the table with the turkey in his painting Freedom From Want. Or look to this poem written by a child that was published in 1911’s The McEvoy Magazine for School and Home, which also proves that it didn’t take much to win the St. Nicholas League prize: 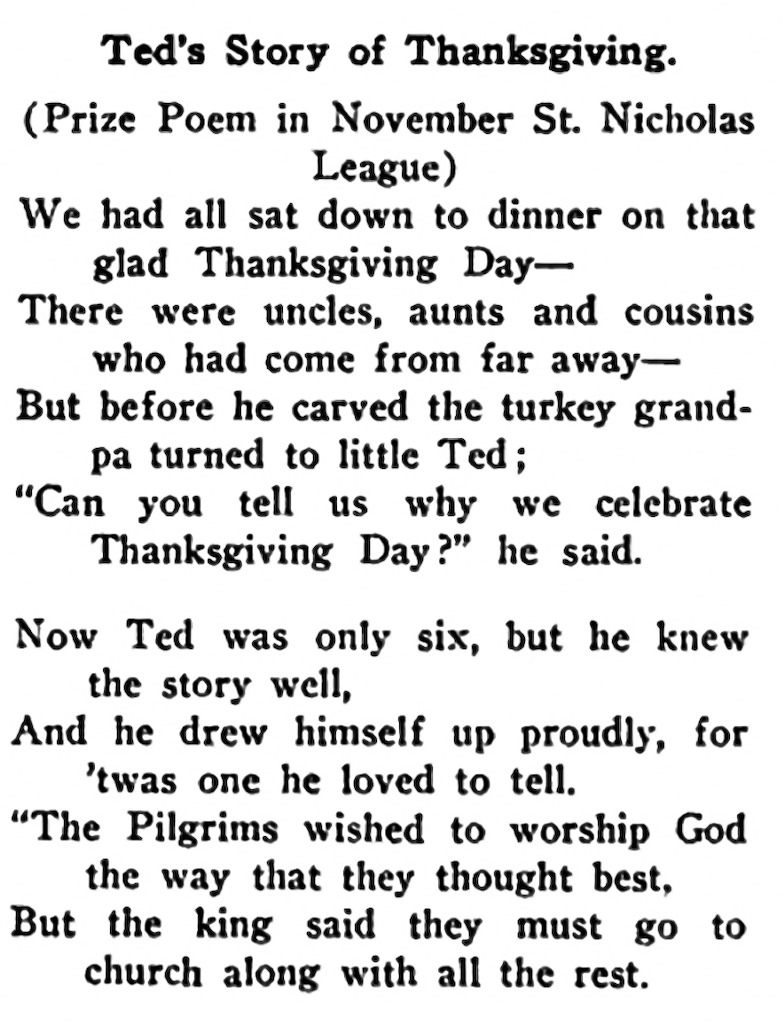 All of which finally brings us to the biggest upset in the history of carving, that simultaneously oft-maligned and celebrated tool that’s ceremoniously removed from a drawer once a year on Thanksgiving: the electric knife.


The above image is from a Popular Science section called “New Ideas From the Inventors,” circa 1957. But while men might’ve started salivating for that sweet vibrating phallic symbol in ‘57, General Electric didn’t introduce its knife to the public until 1963. And people went crazy for it. According to Joel Sanders in Stud: Architectures in Masculinity, which looks at the electric knife through the lens of being the rare kitchen gadget targeted at men (at the time, at least), the electric knife reached $1 billion in sales by 1966.

The electric knife would seem to be the exact opposite of the Cervio technique. Not only do men not have to hunt and kill their own meat, but the electric knife ensures they don’t have to learn carving skills either. Sanders puts it this way:

As an appliance whose sheer physical presence — its size, weight, and sound — upstages the drama of the task at hand, the electric knife embraces a central aspect of modernist kitsch: the display of technological features exceeds the demands of the situation.

In other words, the electric knife is a tool of needless, inelegant power — the kitchen gadget version of your neighbor who got a ride-on lawnmower for his 800-square foot yard.

That might never be more true than today — a time of farm-to-table everything, “how to butcher your own pig” classes and relearning other, non-pig-carving handicrafts that could easily be lost to technology. So it’s unsurprising that when you Google “how to carve a turkey like a man,” there’s one answer: a good, sharp knife, nothing electric about it. (Or, if you’re the sort of master of things that John Hodgman is, “a hand-forged carving blade with a saber tip accompanied by a two-pronged fork, each with a handle made of sanbar stag horn from India.”)

In that light, it could be easy to shake a fist against the electric knife and rant about how it’s a perversion of the lost art of carving. But the electric knife is also kind of lovely: a reminder that, when it comes to tradition, we don’t all need to be Cervios. The thing that matters about a holiday is how you come together and make it your own.

And, of course, which family members you decide to give the turkey legs to.