When President Obama recently called to remove tax breaks from 529 college savings plans, he was loudly booed, Snoopy-at-Christmas-pageant-style. Not a big surprise considering that a college education—whether our own or our children’s—is pretty much the new mortgage. For instance, a traditional four-year college can run anywhere from $100,000 to $250,000. Also not a big surprise: Tuition is only going up; projected tuition costs for 2033 are $41,228 a year for a public university, and $92,869 a year at a top-tier private institution. Which means if you just had a baby, the cost will be even more insurmountable by the time the newest member of your family is ready to enroll for their freshman year.

Your best shot to avoid this fate? A 529 Plan–which in the end, the White House decided to leave alone.

A Double Major in Savings. Broadly speaking, there are two kinds of 529s:

Freshman Year, Now Free! Let’s assume you’re going to get a 529 Savings Plan because it’s a more flexible option. (Otherwise, your kid is essentially required to go to a university in the state where you signed up for the prepaid plan.) The next step is to diversify your portfolio. Which means choosing a 529 Savings Plan that has low management fees and the underlying assets are index funds. Index funds are kinda like buying into the economy as a whole; instead of getting one share of a company, you’re getting a tiny sliver of hundreds of different companies. It’s a money buffet! (Not to be confused with moneyed Warren Buffett).

Now let’s say the index funds in your 529 plan follow the historical 7 percent growth of U.S. equities and that your contributions are tax-deductible at the state level. Simply socking away $5,000 a year into an index fund will save you roughly $160,000 after 18 years. But putting that money into a 529 plan will save you $191,000—an extra $31,000 that you didn’t pay in taxes. You just aced freshman year. 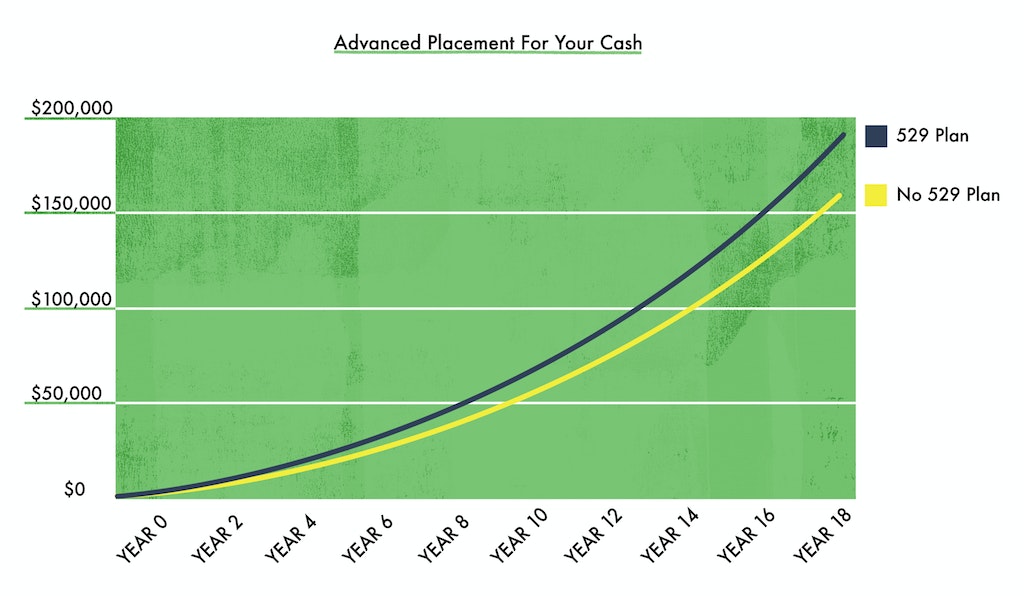 The tax savings become even more aggressive with slightly bigger deposits and higher growth rates—e.g., $8,000 a year at a 8-percent growth rate: 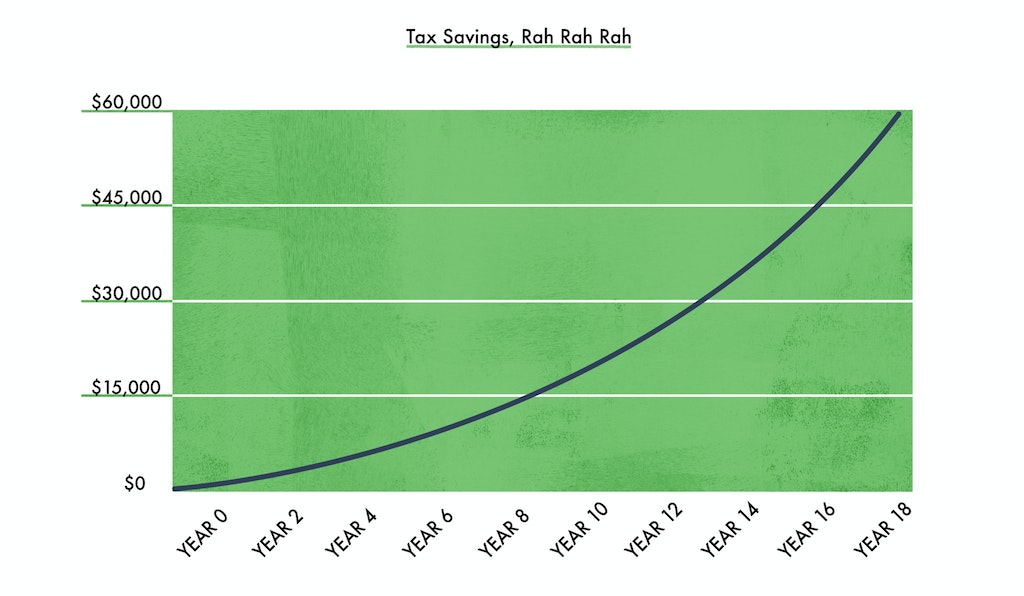 So now you’ve got Sophomore year covered too.

529: The CliffsNotes Edition. There are a few “gotchas” to watch out for with a 529, mainly dealing with the timing of withdrawals and IRS codes for gift taxes (the WSJ breaks it down in glorious monochrome), but they’re far outweighed by the additional perks.

The first perk is that other relatives (grandparents, uncles, sad but generous makeup-smeared aunts) also can put money into the account. Birthday gifts and bar-mitzvah money can now all go into one big, interest-earning college piggy bank.

The second perk is that, almost always, you can roll over the account to another beneficiary, as long as they’re a relative. So if your first child decides not to go to college (hey, it worked for Steve Jobs), you can change the beneficiary to your second, less disobedient child.

Finally, and maybe best of all, if both of your kids don’t listen to you, you can even roll it over to yourself. So pull a Rodney Dangerfield and go to college in your later years, all financed by the 529 you socked away for your higher-education disdaining, start-up bound kids. And they say money can’t buy happiness.