In the late 19th century, men gazed into mirrors with despair. For this was no ordinary time in history. This was the onset of what many believed was the Hairpocalypse.

The articles of the era testify to the growing panic. “One-half of our American business and professional men are bald at the present time,” declared the journal Science in 1886, adding that it was only a matter of time before we became “a race of hairless Americans.” The North American Review proclaimed that, unless tendencies changed, we would have “skins as bare all over as the palms of our hands!”

Male-pattern baldness has rarely been a cause for celebration. Hippocrates, the father of modern medicine, spent much of his life seeking a cure for his thinning scalp. Julius Caesar became the spiritual founder of the Hair Club for Men when he fashioned an imperial toupee from a laurel wreath.

But the learned men of the late 1800s became convinced that baldness had reached epidemic proportions. They scrutinized large public gatherings, counting the number of hairless heads in the crowd. “From the visitors’ gallery of the stock exchange, one views a mob of shining pates,” the New York Medical Record reported.

This hair loss was an affront to those living during the Industrial Revolution. Nature supposedly had been subdued by science and technology, and yet, nobody had a clue what caused baldness. “The physician deems it a topic scarcely fit to employ his time and thought,” wrote Philadelphia doctor Benjamin Godfrey in a lengthy rant against his peers. Absent the attention of those “possessed of scientific knowledge,” he said, foolish ideas were being propagated by men ignorant about hair and “the way in which its vigor may be promoted or its decay stopped.”

Indeed, no theory was too bizarre to find its way into the newspapers and medical journals. Here are a few of the weirdest, most offensive and just bat-shit crazy.

The purpose of hair was to help keep us warm. But, modern man had found ways to defeat climate through indoor heating and protective clothing. As such, hirsuteness was becoming a vestigial trait. “It will not be the first great physical change through which our race has passed since it was clothed with hair from top to toe, had great fangs in its jaws, moved its pointed ears at will, and was decorated with a tail,” the North American Review observed. “It is not difficult to imagine the time when our remote ancestors first noticed that the coats of shining silky hair which covered their bodies were beginning to grow thin. Perhaps it was at the same time that their graceful and convenient tails were growing shorter and less flexible.”

Like other theories, this one had the appeal of explaining why this trait was absent from less-developed cultures, which did not have the same defenses against the vagaries of climate (racist and classist views cultivated by Social Darwinism). Hair envy was often directed at more “primitive” societies, fueled by the perceived irony that superior intelligence had brought this plague of baldness down upon Western culture. “Civilized man has a larger and more deeply convoluted brain … than the typical savage, [but] compare the male European or American head of today, fertile enough within, but so often a scalpy desert without, with the thickly-thatched cranium of the Asiatic or the African,” noted the Review.

Popular belief held that “nervous diseases” and vain habits had sapped man’s primitive vitality, rendering him weak and effeminate. “Baldness is without a doubt a disease of civilization and is one of the penalties attached to being an inhabitant of a progressive and cultural country,” wrote Dr. W.S. Gottheil. “Perhaps the more civilized the country the more prevalent will baldness be, for extreme civilization infers a mode of life furthest removed from that of Nature. Indeed, a lack of hair is almost synonymous with the acme of civilization and is one of the most annoying of the white man’s burdens.” 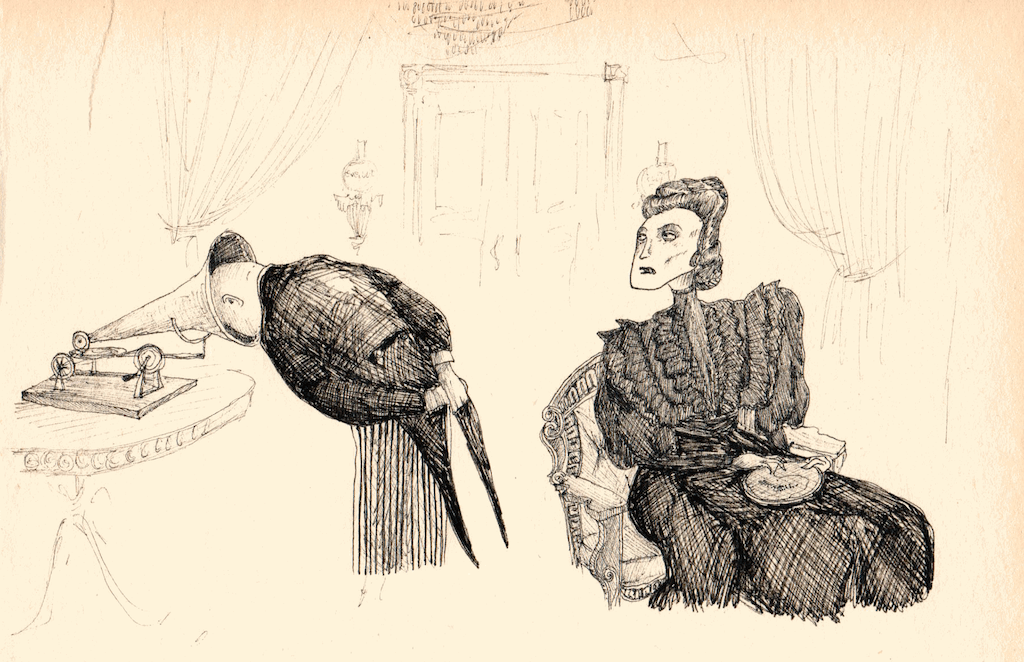 Considerable wrath also was directed at what men chose to wear on their heads. Writing in an 1887 issue of Popular Science, W.C. Gouinlock was one of several theorists who blamed baldness on rigid, thick-brimmed felt hats. These “tourniquets of fashion,” he argued, constricted arteries that nourished the hair bulbs. “Baldness begins where the circulation is weakest, on the top of the head, the region that must be the first to suffer when the blood channels from below are choked,” wrote the New York Times, explaining this theory. “It stops at the mark of the hat band, for below that line the blood vessels are not compressed.” This idea conveniently lent support to the perception that baldness disproportionately afflicted upper-class men, since the lower classes tended to wear soft-brimmed caps, while women’s chapeaux were far less constricting and were made of more permeable material that didn’t “suffocate” the scalp.

Poor nutrition reduced the blood supply, opined an American physician in the British Medical Journal. Nature responded by directing circulation toward the parts of the body that needed it the most. Man’s hair was sacrificed so that his vital organs could live.

Or, perhaps the real problem was lack of protein? Dr. E.C. Mapother observed, “Those races of men who consume the most meat are the most hirsute.” His prescription for lustrous hair was the Gilded Age’s version of the Paleo diet. Modern man should return to his primitive roots as a hunter, foregoing starchy meals of processed wheat and oats.

Certain types of music, especially produced by string instruments, were said to produce sounds that promoted hair growth. “But wind instruments, especially the trombone and cornet, are fatal to hirsute adornment,” the Musical Times reported. The magazine also cited a study by an unnamed statistician, who demonstrated that only 1 out of 100 composers went bald, whereas baldness afflicted no less than 11 percent of those “in the ranks of the honorable corporation of the goosequill.” 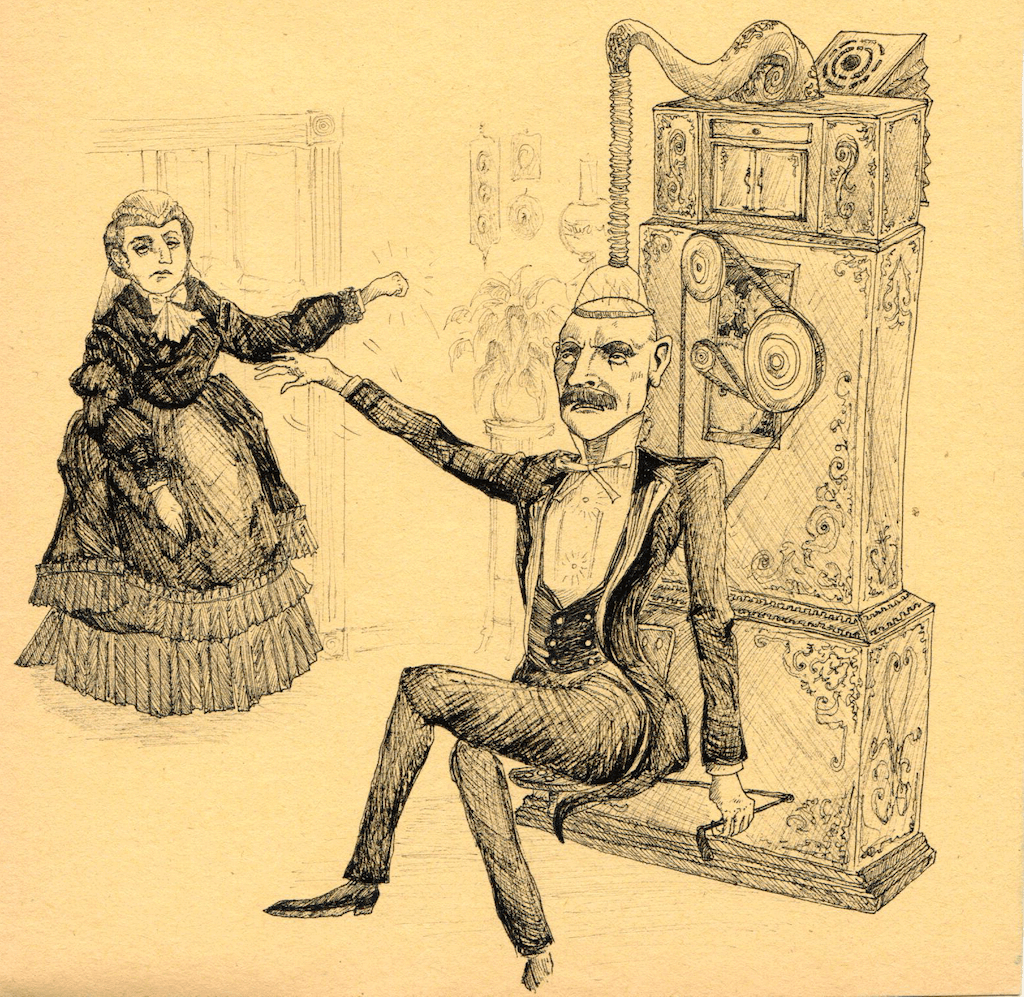 A naval physician named A. Gaskell argued that exercises designed to pump up muscles imposed severe strains on the body that caused other parts of the anatomy to atrophy and degenerate — symptoms included difficulty breathing and the premature loss of hair.

Although, today, we know that the primary causes of male-pattern baldness are genetics and hormones, heredity was widely dismissed as the primary culprit in the 19th century. Still, some thought that hair loss might be one of the consequences that came with good breeding — similar to the inherited diseases, such as hemophilia, that afflicted Europe’s royal families. The British Medical Journal whimsically observed that, in contrast to the nobility, “hairiness and anarchism often go together, as if the bomb-throwing brotherhood had determined to throw off even the mild tyranny of the barber with other forms of government.”
But, among many medical practitioners of the era, heredity was seen to play a secondary role — endowing certain individuals with traits that somehow made them more vulnerable to contagious diseases of the scalp. The pages of journals were filled with conjecture about the types of infectious agents that caused hair loss, including dandruff, bacteria and fungi.

But what of the Rogaine, Propecia and Nioxin of the day?

Ironically, the medical journals delighted in debunking the quack cures that were being advertised to a gullible, desperate 19th century public. Yet, some “legitimate” remedies sounded less appealing than the cocaine-infused hair tonics and electric brushes being peddled by hucksters. One doctor traveling abroad claimed that the “ingenious Chinese” had long ago learned that eating rat flesh was a proven hair-restorer. “Is the rat liable to baldness?” asked a medical journal. “And, if not, is its immunity natural or acquired? In either case, it might be possible to obtain from it a prophylactic and curative serum, the use of which would make the eating of the rodent unnecessary.”

Amid all this rampant speculation, however, there were some who not only accepted the inevitably of male-pattern baldness, but who yearned for it. After all, a shiny head signaled to society that one was a member of the learned, upper classes. An 1889 edition of The Medical Press and Circular published the correspondence of a young physician who bemoaned his failing medical practice. “I have no money and my hair is inconveniently thick,” he wrote. “Incipient baldness gives the appearance of a high and dome-like forehead and inspires the ladies with confidence. The fortunate possessor of this beautiful feature is pronounced very clever — which settles the matter.”

Although he didn’t realize it at the time, this unnamed physician might have been closer to the truth than many of his peers. Why would baldness endure for thousands of years, if it put men with at an evolutionary disadvantage? One current theory, writes Rob Dunn in New Scientist [subscription required], is that a chrome dome “signals dominance and status.” A head not covered with hair serves “as a sort of advertising board for emotions, in particular the red flush that accompanies anger.” Since red is “often the color of dominance,” it sends sexual rivals “a wordless but very clear statement of, ‘Don’t mess with me!’”

It’s a shame that this theory never caught on in the 19th century. It would have saved men — and, probably quite a few rats — a lot of s**t.

Mark Strauss is a writer and editor in Washington, D.C. This story was reposted from our sister site, wearemel.com.