When it comes to packing, there’s the internet expert’s standard — which includes folding some clothes, rolling others and placing the most wrinkle-prone garments closest to the top of the bag — and then there’s my father’s standard, which is militant, measured and masterful.

First, though, a bit of background on father Fiouzi: He’s the sort of guy whose closet is organized by color, type and season. A man for whom the term “spring cleaning” means absolutely nothing because he’s always organized. He’s a salesman who’s suited six out of seven days of the week, travels at least once a month for work and whose shirts are always dry cleaned. Efficiency courses through his veins.

In other words, he’s not any old packer of things, he’s an artist and his suitcase is his canvas.

“I have a couple of suitcases,” my dad explains. “A small one for a one-day trip and a bigger one for three- to five-day trips that I could make work for up to a week if I have to. I have a toiletry kit in each bag that has my toothbrush, toothpaste, hairbrush, gels, cologne and razor always ready to go.”

“For one day trips, I don’t take shoes,” he continues. “I have one set of casual clothes: jeans and polo shirt, light casual jacket.” On longer trips, however: “To maximize space, I put my socks and belts in the shoes. That does two things: Protect the shoes as would a shoe horn, and gives me extra space.”

All of which is useful, but let’s get to the real stuff: Shirts and suits. How do you pack them in such a way that you don’t have to get them dry cleaned upon arrival?

“If it’s a casual shirt, I fold them the same way you’d see in the stores,” he tells me. “But with dress shirts that I need to wear the next day, the best way to do it is to keep your shirt in the dry-clean plastic cover when you place them in the suiter. You get less wrinkling that way.”

“It’s a specific type of suitcase with a trifold encasing that’s meant for dress shirts and suits,” he tells me. Basically, it looks like a garment bag that’s folded into three sections.

What exactly is the plastic for, then?

“If you leave your dress shirts in the plastic covers, it allows them to float in the bag as opposed to them getting caught on another fabric or rubbing against the inner lining of the suitcase,” he explains to me. “After I put it in the suiter, I fold the sleeves over the shirt, crossing them like an X.” 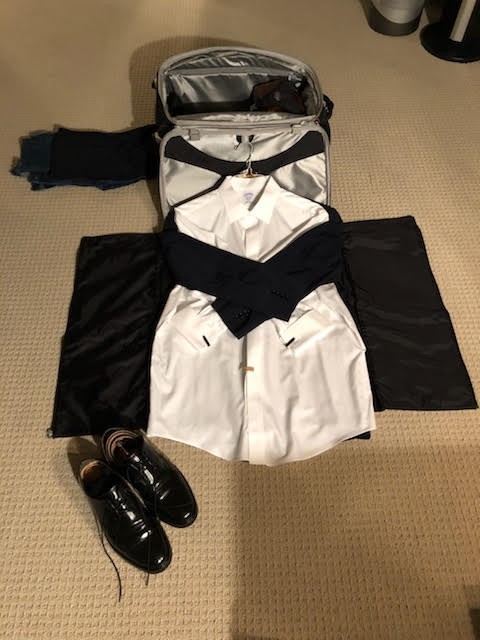 “I put my suit jacket and trousers the way they would be on a suit hanging in your closet, and put them underneath the shirts,” he says.

My dad goes on to explain that you have to make sure the suit is laying flat, and that you should fold the suit sleeves in the same X formation as the shirts. “I take the suit sleeves and go over the shirt’s plastic cover in the same X format,” he says. “The suit jacket should be embracing the shirt inside the suiter so that the sleeves are floating against the nylon, this way they don’t get caught as you’re folding the suiter.” 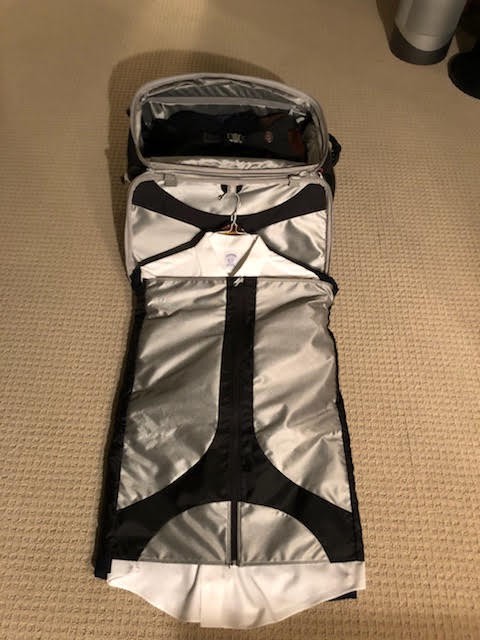 “Once I arrive to the hotel, the first thing I do is open the suiter, grab my suits and shirts from the hanger and hang them in the closet so they can unwrinkle and relax,” he tells me. “Generally by the next day, when I need to wear the suit and shirts, they’re wrinkle-free and I don’t even need to use an iron.”

As if an iron was ever in question, dad.