“Bullshit is unavoidable whenever circumstances require someone to talk without knowing what he is talking about.” So says Princeton philosopher Harry Frankfurt in his groundbreaking 1986 essay “On Bullshit.” His insanely precise definition of BS has become legendary in philosophy departments the world over as a way to combat what many see as a global disease of disinformation, particularly prevalent in the realms of advertising and politics. Here’s Frankfurt himself talking about that:

In a nutshell, the theory goes like this: A bullshitter isn’t the same as a liar. The liar at least recognizes the truth as their enemy, and so, in some way retains a certain respect for the authority of real facts. The bullshitter, on the other hand, could care less about the truth. Bullshitters simply want to sell you an idea to further their own ends, regardless of whether it coincides with the truth or not. And therefore, warns Frankfurt, “By virtue of this, bullshit is a greater enemy of the truth than lies are.”

In an era of global connectivity and factual instability (aka FAKE NEWS), being able to effectively call people on their BS seems to be an increasingly vital life skill. Below we’ve put together a field guide to how to do it in cultures beside your own.

United Kingdom
Bullshit Alternative: Bollocks
Literal Meaning: “Testicles”
How It’s Used: Originally a polite medieval English word for nuts, it only passed into vulgar usage around the mid-1700s and is now one of the most effective conversation-stoppers deployed throughout the British Isles. Use with caution though: While a general “That’s bollocks” can be equivalent to “That’s bullshit,” the more specific “That’s the bollocks” actually means the complete opposite, roughly translated as “That’s brilliant, I wholeheartedly endorse it, and it’s totally made my day.” Why? It’s complicated.

France
Bullshit Alternative: Conneries
Literal Meaning: “F*ck-ups”
How It’s Used: In Edinburgh, “Les Conneries” might be a pretentious way of introducing the actor Sean Connery and his wife at a party. In Paris, this would be a terrible mistake. The commonly heard, yet highly offensive, phrase Arrête tes conneries is a harcore injunction to “Stop your bullshit” — but the root word “con” comes from an old French word for “rabbit,” which, in an adversarial context, is a double-entendre that approximates to the dreaded C-word in English.

Italy
Bullshit Alternative: Cazzata
Literal Meaning: “Bullshit”
How It’s Used: One of a few standard Italian terms for BS, cazzata can also be deployed to mean “garbage,” “that’s stupid” or simply “shit” — though it actually derives from cazzo, meaning “dick.” Technically it’s highly rude, but in recent years cazzata and terms like it have lost their power to shock, and are freely used in everyday conversation. To give it a precise “bullshit” inflection, say Che cazzata! (“Bullshit!) or Tutte cazzate (“What a load of shit!”).

Japan
Bullshit Alternative: Fuzakeru na (ふざけるな)
Literal Meaning: “Don’t play around”
How It’s Used: In Japanese, the closest equivalent to the noun “bullshit” is detarame (でたらめ, also translated as “nonsense”), which isn’t particularly shocking. But when you’re calling bullshit on someone, saying Fuzakeru na is among the rudest things you can say in Japanese. It’s not so much the fuzakeru, which implies fooling or joking, but the na, meaning “don’t.” In one of the politest cultures on Earth, a hard “don’t” is an overly direct and negative way of addressing someone, and that’s the part that will get you thrown out of the Pokémon convention.

Germany
Bullshit Alternative: Quatsch mit soße
Literal Meaning: “Nonsense with sauce”
How It’s Used: Perhaps the clearest articulation of Frankfurt’s definition, this fine Teutonic phrase evokes an image of worthless utterances sweetened by an artful bullshitter to make them more palatable and easier to swallow. Almost inevitably, the phrase Nonsense with Sauce was also the name of a kids’ cooking show which aired on the German version of Nickelodeon in the mid-2000s. (Note: Do not attempt to pitch a kids’ show called Bullshit to American Nickelodeon.)

The Netherlands
Bullshit Alternative: Lulkoek
Literal Meaning: “Dick cake”
How It’s Used: Another Northern European culinary twist comes from the land of baked goods, this time a delightfully vulgar variation on the more genteel, 1950s-sounding lariekoek (“nonsense-cake”). In Dutch the plural “dicks” or “penises” can be used as a verb, lullen, which means “to talk pointlessly.” Blend in some flour and an egg or two, shove the mixture in your Dutch oven for half an hour, et voila: Dick cake! 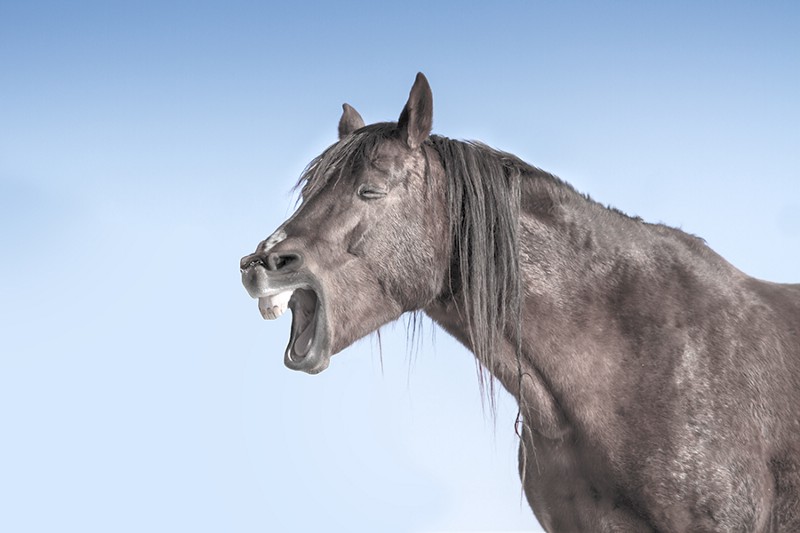 Russia
Bullshit Alternative: Bred syvoy kobyly (Бред сивой кобылы)
Literal Meaning: “The ravings of a gray male horse”
How It’s Used: This ancient Russian put-down stems from a Slavic belief that a gray mare (or more specifically a mare that’s mainly gray with at least one other color present on its hide) was the dumbest of all the animals. This was apparently accompanied by a superstition that if you saw a gray horse in a dream, somebody was about to lie to you. So more shit horse than horseshit.

Paraguay
Bullshit Alternative: Bolaterapia
Literal Meaning: “Fabrication therapy”
How It’s Used: This almost Freudian formulation, popular in Asunción, derives from the Argentine slang world bola (meaning “made up”) and the Spanish suffix terapia (“therapy”): Suggesting stuff that’s said purely to make someone — speaker, hearer or both — feel better about something.

Iran
Bullshit Alternative: Kossehsher
Literal meaning: “Pussy talk”
How It’s Used: So maximally offensive when overheard in Farsi that, we have it on good authority, you should never, ever say this out loud on the streets of Tehran. The milder synonym for “bullshit” in Farsi is zerr — a few degrees lower on the profane-o-meter and way more fun to say (just say it: Zerrrrrrr), but still too strong for polite company, such as, say, the Iranian ambassador to the U.N.

Ireland
Bullshit Alternative: Gobshite
Literal Meaning: “One who talks incessant claptrap”
How It’s Used: According to Bullshit: A Lexicon by Mark Peters, this blending of classic Irish/British slang for “mouth” (gob) and, more obviously, “shit” (shite) first emerged as a derogatory term applied to seamen in the U.S. Navy in the early 1900s. Since then it’s become the pre-eminent method of dismissing someone as a rambling eejit in the Irish vernacular — but it’s frequently used in affection as much as with disdain. In Portland, Oregon, there’s even a literary magazine proudly operating under the moniker Gobshite Quarterly.