“Once you take on a task, never let it go, even if you are killed.”

Sixty-four years later, Matsuri Takahashi, a 24-year-old graduate recruit at Dentsu, leapt from her Tokyo condominium after logging more than 105 hours of overtime a month. “Why do things have to be so hard?” she asked her mother in a suicide note. The Japanese government officially called it “karoshi,” or “death by overwork” — a term invented in 1978 to refer to the increasing number of professionals suffering fatal strokes and heart attacks. The phenomenon isn’t exclusive to Japan, though: In South Korea, overwork-induced death is referred to as “gwarosa.” And in China it’s called “guolaosi.”

Nor is Tegahashi the only recent victim of karoshi. Over the past decade in Japan, more than 300 people each year have been awarded compensation from work-related accident insurance after suffering either heart attacks or strokes. (If the cause of death is judged to be karoshi, the victim’s family receives compensation from the government of around $20,000 per year and company payouts of up to $1.6 million.) And a 2016 government white paper claimed that one in five workers was at risk of death from karoshi.

The problem, explains Scott North, a professor of sociology at Osaka University, is that Japanese workers are incentivized to work around the clock to get better evaluations, and bosses don’t tell them to go home because the extra effort makes them look good.

Americans used to work like this, too. In 1890, the average work week for a full-time manufacturing worker was more than 100 hours. But thanks to tireless efforts by labor organizations like the National Labor Union, the United Auto Workers and the Knights of Labor, Congress passed the Fair Labor Standards Act in 1938. As a key component of Roosevelt’s New Deal, the FLSA limited work weeks to 40 hours (they flirted with a 30-hour work week) and introduced the concept of overtime, guaranteeing time-and-a-half pay for all hours worked beyond 40 per week. “Eight hours for work, 8 hours for rest, 8 hours for what we will,” became a common labor slogan. 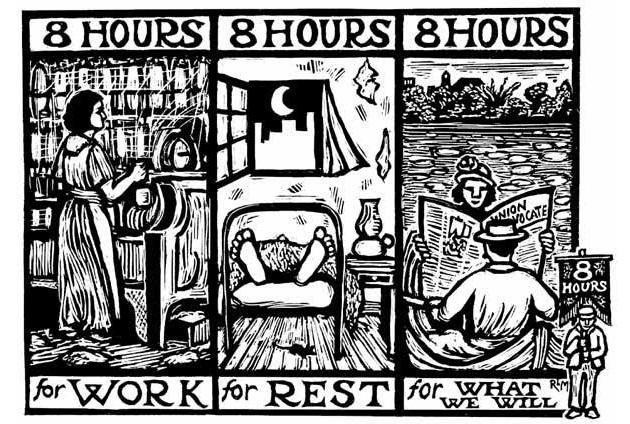 While there are labor unions in Japan, membership has steadily declined over the years. More relevant is the fact that overworking is baked into Japanese culture, according to Koji Morioka, an emeritus professor at Kansai University who advises the government on ways to combat karoshi. “In a Japanese workplace, overtime work is always there,” he told the Washington Post in 2016. “It’s not forced by anyone, but workers feel it like it’s compulsory.”

Comparable overtime laws also exist in Japan, North says, but there’s a lack of adequate enforcement and reporting. Although karoshi has been a problem for several decades, it was only 18 months ago that the government passed legislation to try to tackle the problem. What’s more, filing claims for overtime signifies inefficiency — a dirty word in Japan. “If you were a better worker, theoretically you wouldn’t need extra time,” North says. “Hence, there’s a niche for the ‘go home drone.’ Management can claim to be following corporate policies of cutting long work hours without putting bosses in the position of telling workers to go home.”

North is referring to “T-FREND,” a first-of-its-kind drone currently in development by the Japanese security firm Taisei. Come October, T-FREND will hover over after-hours workers blasting “Auld Lang Syne,” commonly played when stores are closing in Japan, to force them to leave.

“Great attention has been paid to overworking in Japan,” says Taisei’s Norihiro Kato, who confirms T-FREND is being created to tackle the problem. Once operational, he tells me, “T-FREND is expected to give us various solutions. One is to get employees to go home. Another is to function as a security drone that surveils the office with a camera.”

However: “I don’t think a drone blaring music in offices late at night would work in the U.S.,” says Swish Goswami, a 20-year-old venture capitalist and TEDx speaker who points to the obvious civil liberties implications of camera drones hovering over employees after hours. But also, he says, most U.S. companies cap overtime hours, so the drone’s usefulness here would be limited.

According to the Bureau of Labor Statistics, the average American works 44 hours per week, or 8.8 hours per day. In some industries, though, like tech and finance, employees routinely work an excess of 60 hours a week and must be available constantly via their smartphones.

Even Ben Waber, whose company Humanyze is all about employing technology in the workplace, is skeptical that drone surveillance is the answer to karoshi. “It’s unlikely to be effective,” he explains. “If executives and managers expect long hours and a lot of output, then at the very least you’ll see circumvention of these pretty basic technical changes. If your email is turned off at a certain time, I’ll just send you an email five minutes beforehand with everything I need you to do tonight.” (After Takahashi’s suicide, Dentsu opted to shut down the electricity in the office at 10 p.m.)

“Effective enforcement is basically impossible without extreme micromanagement of people,” Waber says. “Which is something most businesses try to avoid.” To see if policies are being circumvented, for example, Waber says a manager would need to read all of an employee’s emails to determine if after-hours work is covertly being assigned or teams are meeting across the street at Starbucks after the office lights go out.

Elsewhere in the world, the government is attempting to do this micromanaging via legislation. For example, a new labor law took effect in France last year that gives employees the “right to disconnect” from email, smartphones and other electronic leashes once their working day has ended. It’s designed to “ensure respect for rest periods and balance between work and family and personal life,” the Ministry of Labor said in a statement.

That’s all well and good, says Thomas Chardin, director of a human-resources consultancy in Paris, but today’s digital tools are blurring the line between personal and professional life. Email and Slack mean you never really leave the office, he explains, which makes office drones like T-FEND a bit silly. In fact, a 2013 study by the American Psychological Association, for example, found that more than half of those surveyed checked work messages at home.

Furthermore, tech companies are determined to create “homelike” environments at work. John Schoettler, head of real estate at Amazon, says he aims to make communal areas into “living-room-like spaces” with “TVs, couches and bookshelves” including framed photos of employees.

So who wants to leave the office when it provides free food, video games and a framed selfie of Kevin from accounting?

Not to mention, as Chardin adds, legislation comes down to enforcement. “This law is an invitation, not an obligation. For the employee, no penalty is provided and few companies have complete bans. In today’s globalized global business world, that would be nearly impossible to do.”

And yet many companies are trying. In 2014, German automaker Daimler implemented a “Mail on Holiday” email policy that allows employees to set their emails to auto-delete while away from the office. As Heiko Pappenberger, a human resources executive at Daimler, tells me, “‘Mail on Holiday’ is voluntary and an individual decision of every employee. There is no mail jam during holidays. When employees return, they start with a clean desk.” (Similar programs limiting emails on nights and weekends exist at Volkswagen and Deutsche Telekom.)

But Waber is skeptical of these efforts, too. “I haven’t seen data that shows legislation works,” he says. (That said, it’s safe to say the Fair Labor Standards Act did, at least for the millions of children who previously toiled in coal mines, glass factories and textile mills for 18 hours a day.) “I do think legislation that required reporting could be effective public shaming. If you’re a company on the ‘most stressed out / highest workload’ list, you’re going to have a harder time recruiting. I think transparency around that will be helpful.”

The problem with overhead drones, email suppression and even legislation, he says, is such strategies don’t address underlying problems, they only paper over them with technology. If you’re simply chased out of the office with a ton of work to do, that’s just avoiding the problem and adding to your anxiety, he notes.

Instead, a cultural shift is required.

“First, figure out, team by team, how much people are working. That enables you to say, ‘You need to get your numbers down. Here are some training programs to help you do that.’ For example, our technology allows companies to use different strategies for different parts of their organization and rapidly test those out to see what’s working.”

When I ask Gen Z Goswami to predict the future of overworking in America he shrugs it off. “We get labeled as the ‘bean bag generation’ because we always want to relax on an easy schedule. But my generation prides itself on finding work that correlates to a lifestyle. Many of us won’t take super-rigorous jobs because we want to allow for balance, leisure and side projects.”

As a result, he says, Gen Z won’t be the ones responding to worker burnout.

“The current workplace is going to have to respond to the needs and demands of our generation.”