I struggle with asking for things that I want.

I’ve never, for example, sent a meal back to a restaurant kitchen for any reason. Instead, I’ll happily power down the veggie special after ordering lobster to avoid an uncomfortable confrontation with a waiter.

I was consistently late to work at a previous job because executing a harrowing left turn into the parking structure often required asking permission from cars in the next lane to cut in front of them.

And I’ve missed more than one deadline after hesitating to pester the transcriber to be sure to have an interview to me by the end of the day.

I’ll just do it myself, I reason, struggling to type dozens of words a minute with three measly fingers.

Such gutless deportment makes me an easy mark and a lousy manager, the latter becoming increasingly relevant to my professional career. So I’ve been on the lookout for ways to improve my assertiveness for years. Last fall, while on vacation at the Miraval Resort & Spa in Arizona, I saw a brochure for equine therapy, which listed “improved leadership & communication skills” as a promised benefit.

It sounded interesting, so I resolved to get back on the horse — or at least near one — when I got home.

Turns out, equine therapy is everywhere in Southern California (but of course). There’s Horses for Forces, addressing issues facing wounded and traumatized military personnel and their families; Let’s Ride Therapeutic Equestrian Program, which helps those with emotional issues and developmental disabilities using a horse’s rhythmic movement to improve balance, posture and overall body awareness; and a three-day experiential intensive program at LionHeart Ranch Equestrian Facility, designed for individuals working to rebuild trust while in the process of healing from rape, PTSD and domestic abuse.

In the end, though, I decided on clinical psychologist and psychoanalyst Dr. Val Coleman’s program at Stand in Balance in the Santa Monica Mountains, which specializes in “helping leaders and teams maximize their potential and better communicate with coworkers whose services they rely on,” while allegedly improving morale, productivity and employee retention as well.

Sign me up, I thought, hoping the therapy might also include a lesson on “growing a pair of balls to tell a waiter your steak is underdone.”

Stand in Balance is a short 45-minute drive from the MEL office, but it feels like a different world. To wit, the third paragraph of the driving directions reads:

As you shift into this mountain area, we invite you to leave the hustle and bustle of the city behind and take in the natural beauty around you! Notice what changes in you. Drive in through the gate and park in the marked area on your left. A staff member will meet you there.

“You must be Brian,” Dr. Val cheerfully greets me in my car. She’s tall, super-friendly and reminiscent of Jane Lynch’s character in Best in Show.

After a brief safety chat that involves reviewing the release I just signed, which remind me that we are, in fact, in nature with some dangers involved (insects, snakes and “unpredictable four-leggeds,” etc.), Dr. Val, her American Bulldog Billy-Bob and I walk up the “Kokopelli Trail” to the equine arena. I’m told Kokopelli is a Native American deity of fertility, playfulness and engagement. “That’s him there,” Dr. Val says, pointing to a sculpture along the trail. 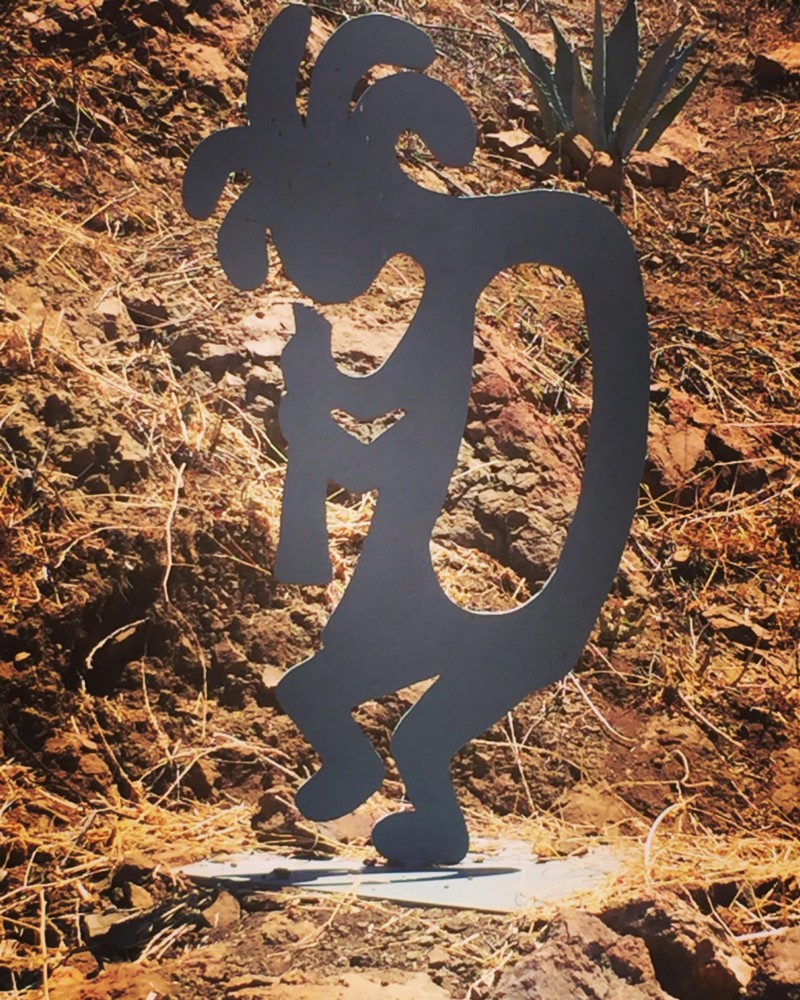 We’re greeted by Terry, Dr. Val’s co-facilitator, who is equally sharp and friendly, and the three of us take seats beneath two massive oak trees.

Horses are prey animals, Dr. Val explains, fed upon by lions, tigers and bears. As such, they’re extremely tuned into their senses—they can hear things we can’t, sense energy we can’t detect. They have eyes on the sides of their head to see nearly 360 degrees.

“They can sense our heartbeat five feet away,” she explains. “They’re completely in the moment and only care about who you are, what your energy is and whether you’re being authentic and congruent — meaning your insides match your outsides. Tuning into all of these sensory and energetic things is how they protect themselves in the wild.”

This is what makes horses such effective BS detectors and why Dr. Val uses them to work with corporate teams looking to improve cohesion in the workplace. Say there are things limiting a team’s productivity, Dr. Val has them set a goal — maybe a sales goal — and metaphorically construct it out of poles and cones like a little house. Next, the team picks a horse to represent a specific customer and works together to lead the horse into the house without using a halter or rope.

“If everybody is connected, they can get the horse into the [house],” she says. “But if they aren’t problem-solving together with leadership and clear communication, it’ll fall apart. And it’ll never work if someone goes rogue and starts chasing the horse around by himself because the horse picks up on all the discrepancies and energy. Horses tell you — in real time — how congruent your team is, how clear your communication is and how effective your leadership is. Then we process whatever happened and think about how it can apply in a work environment.”

Dr. Val explains she practices “natural horsemanship,” which essentially means getting horses to do things without forcing them to do so (like pinching the horse’s tendon to get it to lift its hoof). It’s more of a suggestion, she says, and about actually being in communication with one another.
“Natural horsemanship fits really well in leadership training because it’s all about phases — suggest, ask, tell, promise — to bring people together to do things.”

Communication is only partly verbal, she continues, and some put that number as low as 7 percent. The biggest factor is body language, followed by tone — words just back those two things up. “But so often what happens is we say words, and our body language, tone and actions don’t match those words.”

That stuff doesn’t fly with a horse, who will pick up on the discrepancy every time and refuse to follow the direction.

Dr. Val asks me to step into the “round pen,” an enclosed arena in which equine therapies are administered and observed. After introducing myself to a medium-sized brown horse with a white face — they didn’t tell me its name because they wanted it to be a blank slate for projection; for example, because its stubbornness reminded me of my father, I called him “Dad” — I was given a goal: Get the horse to walk around the round pen twice. 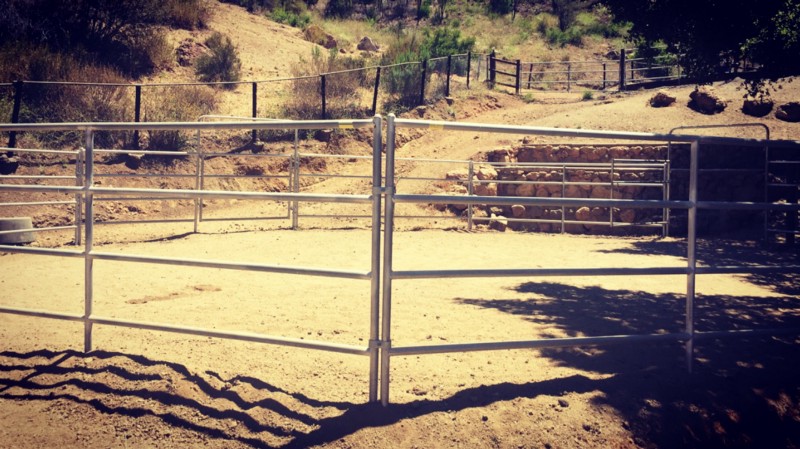 After a few defeated steps, I glance over my shoulder and gasp to find the thing following behind me. My stride increases, triumphantly, as we complete the second lap. I hug the horse as it crosses the finish line.

We get each other, I think.

“I can’t believe he followed me,” I say proudly, looking to my coaches for applause and adulation.

“You did get him to go around a few times,” Dr. Val says, unimpressed. “But that’s an awful lot of energy if you always have to be walking with him. When you ask someone to transcribe an interview, you need them to go do it themselves and bring it back to you, right? So in this scenario you need to ask the horse to go do his job while you stay in the middle of the ring and do yours.”

I stand there, perplexed. They ask what I’m feeling.

I have no clue how I’m going to do this, I say, adding that I often feel this way. I live in a near-constant state of angst, I explain, similar to what I’m feeling right now. How the heck am I going to get this massive beast to move around the ring without a rope or a language we both connect to?

Terry walks into the round pen and starts clapping and pointing. She says she’s going to give the horse some direction and simply ask him to do his job. Sure enough, the horse starts walking around the ring. When he hesitates, she resumes clapping and pointing. “I’ll remind him when he starts looking like he wants to stop. But if he’s doing his job, I’m going to sit here and let him do it. I’m not going to nag or micromanage.”

She then asks Dad to stop and meet us in the middle, which he gladly does.

“What was it in me you felt when I walked in here?” Terry asks.

“Yes, and I gave clear direction,” she explains. “I said what I meant and meant what I said. I knew what I needed, and I said go. You want to give it a shot?”

I stand in the middle of the round pen, clap a few times, hold out my hands and say cheerfully, “Let’s go for a walk!”

The horse immediately walks up to me and puts its head on my shoulder. It’s adorable — but obviously wrong.

We try again and again. Each time, the same result.

“I’m not sure what, ‘Let’s go for a walk’ means,” Dr. Val corrects, “and neither is he, clearly. He’s hearing in your voice that you want to connect with him and that’s what he’s doing. Do you find it’s difficult to ask people for things because you want them to like you?”

I sigh and nod.

“Part of this is being really clear about what you’re asking him to do, and part of it is realizing that this is his job. You can ask for what you want and still maintain a connection, but you have to be clear and he’s got to believe you mean it. Ask him from your core.”

After a few deep breaths, I look him dead in the eye and point. “Move. NOW!” I clap, taking a step toward him. And he’s off. After a few trips around the ring Dr. Val says, “Now, what if you need that transcription in an hour to meet a deadline?”

“You don’t need to be mean,” Terry corrects. But the horse has already shifted into a gallop, which I watch in amazement.

A few minutes later, Dr. Val asks me to call Dad back to the center and thank him for doing his job. I hold out both hands and say, “All right, that’s enough, come here.” The horse immediately breaks stride and walks up to me. “Great job, pal,” I say, scratching his neck. “Thanks.”

Back under the oak tree, we unpack what happened.

“If you always try to get people to like you when you ask them for things,” Val explains, “you’re going to be sending mixed messages. Sometimes the nicest thing you can do for someone — particularly fellow employees — is to be absolutely clear about what you’re asking for.”

I return to the office and unpack my things. I send the interview recording to the transcriber with a rare message: I need this by the end of the day Friday so I can write it over the weekend. Please let me know if that will be a problem.

I receive it a day early.