Remember the last time someone you barely knew came up to you and asked: “So, are you and your partner enjoying unprotected sex on a regular basis?”

It happens to me all the time.

Because when you’re a parent, it’s amazing how many people — at the beach, in lines at the grocery store, over a glass of Prosecco at a wake — judge conversational subjects like, “So, are you planning on having another child?” as legitimate small talk. And those two questions are essentially the same.

I’m a father of three boys, and the random family-planning inquisition from strangers is a weird case of boundary blindness that I’ve become pretty accustomed to over the years. As my own brood has expanded, so, it seems, has the license people assume they have to talk about it in public — although I’ve noticed that the predominant line of questioning (and its subtext) has varied depending on the number of kids I have. To illustrate, the past eight years have gone something like this: 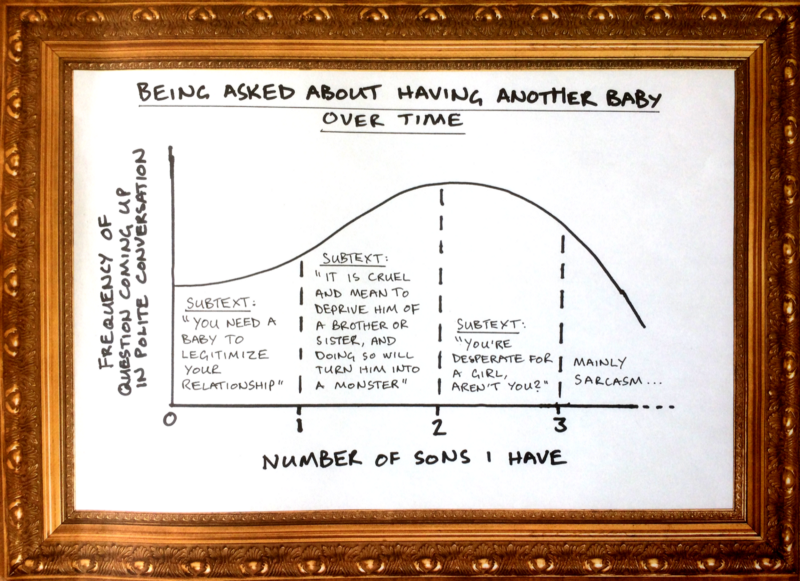 What’s most interesting about this curve is that it exactly describes the contour of a pregnant woman’s belly, in profile, at around 35 weeks. It’s also worth noting that strangers’ curiosity about my progeny peaked at two offspring; since our third wee man’s come barreling into our lives, people have tended to assume, “Yep, they’re done now,” or have only ventured the question in a vaguely sardonic, mocking way, generally as the five of us are in the process of leaving a restaurant.

Another thing that’s interesting is the general assumption people have made that, after two boys, the only reason we’d be trying for a third would be in order to obtain a baby woman this time round. For my partner and I, this has been a consistent source of annoyance since it presupposes a sort of collector’s anxiety on our part, praying for a Hermione doll to complement our box-condition Harry and Ron. (For the record, she wanted a third boy, and I just really wanted to go back to only having two-and-half hours’ sleep a night.)

But for fellow dad Nick — who, as a father of two girls, is regularly confronted by the same kind of gender speculation but in reverse — the bias reveals something unpleasant about male society at large: that it hasn’t moved on much from the medieval world’s obsession with siring a son who would inherit your land, thaneship and impressive supply of peasants.

“It mostly happens with random people I encounter: Uber drivers, store clerks,” Nick says. “Immediately upon discovering I have two daughters, it’s, ‘So you’re gonna try for a boy next, right?’ or some variation of that. Like, ‘Oh yeah, it’s cute you have girls, but that doesn’t really count, bro.’ The two most important little people in my life, but apparently garbage until a son comes along. I genuinely find the question offensive. Why wouldn’t two girls be enough for me?”

I conducted a less-than-scientific survey of a few more dads of my acquaintance, and their responses suggest that most of us are being asked about our future child projections at least every now and again. The majority of fatherly types, though, don’t appear to find the occasional friendly “another one?” nudge half as exasperating as Nick and I do.

Father of two Glen, for instance, tells me, “I guess I take it as a compliment that I’m doing a decent job with the kids I’ve already got. Either that or they’re readying a call to social services.” Glen adds that he definitely won’t ask others about their family plans: “I’ve had too many friends go through hell to be quite so insensitive.”

Kevin, a father of three, says, “I wonder why people do it, as others might be more sensitive than me. Given you don’t know what’s going on in other people’s lives, I would be very cautious about asking it myself.”

“There has been a gradual evaporation of the taboo that topics like this are off-limits,” says Charlie Lewis, a professor in family psychology at Lancaster University in the U.K., who’s written widely on the father’s role in the family. “I suspect that people have always asked probing questions, but they did it in more subtle ways before.”

According to Lewis, another reason dads might get quizzed more openly about family size comes down to a confluence of demographic trends over the past couple of decades, which has helped to make your procreation everyone’s business. “First, there’s a widespread public debate about the drop in populations of Western countries, particularly among professionals,” he says, which might partly explain people’s brazen curiosity about your own fertility when you meet them at parties.

A similar anxiety that’s bubbling away across society, he says, is the “ever-increasing age at which people have children,” which makes reproduction less of a certainty. “The question, ‘Are you planning to have another?’ might well express a concern about whether this is feasible for a 40-year-old — whereas 20 years ago [back when population levels were heading in the other direction] the same question might be asked to a 20-year-old with three children, to hint at a need for birth control.”

One standard-bearer of the trend for smaller families is father-of-one Andy. Andy is vocal about his family planning, adamant that he’s stopping at one. Even so, he says, he’s constantly fielding questions about when his boy will be getting a brother or sister. “It’s so assumptive. Can we talk about something else for once?” he says. “The best argument for having another is that it would help my kid learn empathy, respect and teamwork. But while it’s fair to say that my adult friends who grew up as only children are a bit more selfish and tyrannical than those forced to compromise when they were little, they’re also more self-reliant and effective at getting their own way.”

He also adds that, “There’s the eco argument for just having one — the 21st century is manifestly different to the era when my parents had two kids, and their parents had five kids.”

While family size has become more of a topic of conversation for fathers in recent years, it’s clearly still mothers who bear the brunt of out-of-the-blue next-child interrogations — and who seem to get enraged by them most. Colin, a father of two, has a view on this: “Either we’re not getting put on the spot as much as women, or we just don’t see it as an issue when we do. And honestly, I can’t believe this is something to get touchy about at all. People who do get touchy about it might want to try yoga or something.”

Martin, a father of two, says he’s noticed the another-kid debate becoming a hot topic among the guys at his work, but sees it simply as a symptom of men coming late to the conversation. “It’s only fairly recently that it’s been understood that men are equally involved in the choice of whether to have more children or not,” he suggests. “So perhaps we’re just catching up.” Which could be because, says Martin, “men historically have tended to conform to the bravado approach of saying things like, ‘The wife wants another so I’m checking she’s still taking the pill and not piercing the condoms.’”

That deep chauvinistic swagger lurking in the question may go some way to explain why it’s so much more of a trigger issue for women. As Glen points out, for a man, “It’s hardly a massive personal sacrifice to help make a baby — it’s not like we’re seahorses. Perhaps unfairly, men aren’t perceived as having that whole ticking biological clock thing.”

Or, as Andy puts it, “We dads are still finding our voice in the discourse, and we don’t feel guilty about only wanting one, two or zero kids because we don’t carry the burden of millennia of cultural expectation on our shoulders.”

However historically loaded and gendered the question may be, fathers can expect to be confronting it more and more. So what’s the best way of dealing with a well-meaning but intrusive procreation probe? If, like Andy and (until recently) the People’s Republic of China, you’re firmly committed to a one-child policy, you might try his method of memorizing this list of accomplished only-children that you can handily reel off at dinner parties:

My own strategy, meanwhile, has been to attempt to quickly reinstate a sense of personal boundaries whenever the question comes up. And I’ve found taking a literal tack generally does the trick: “Yes, thank you, we are going for another one — at least three times a week toward the beginning and end of her cycle, and every night when she’s ovulating. Trying all sorts of positions and doing our best to minimize spillage. More Prosecco?”