As a heavily-tattooed person, I’m constantly told that I’m going to regret my tattoos when I get older. I was 18 when I got my first tattoo — an all-seeing eye on my left shoulder blade — and my mom has since taken every opportunity to assure me that I’m going to regret it. Eight years have passed since that fateful first tattoo, during which my tattoo collection has grown immensely, yet my mom’s still at it with the, “You can get them removed, though, right?”

Frankly, I don’t really understand why people assume that I’m going to regret it. Why the hell would I spend tens of thousands to have artists from around the world dig needles into my skin for hundreds of hours if I was going to regret them? I can’t even have a set of bedsheets without almost immediately staining it with blood and ink as I heal my beloved tattoos — I think that shows my commitment, mom.

But alas, I’m only 26, and so people just give me that pitying look you might reserve for a labrador with its head stuck under a couch and assure me that, when I’m older, I might have a different opinion. But…will I? I decided to ask “older people” (older than me, not “old”) with tattoos how they feel about them now — and obviously, whether or not they’ve come to regret them. Here’s what they had to say: 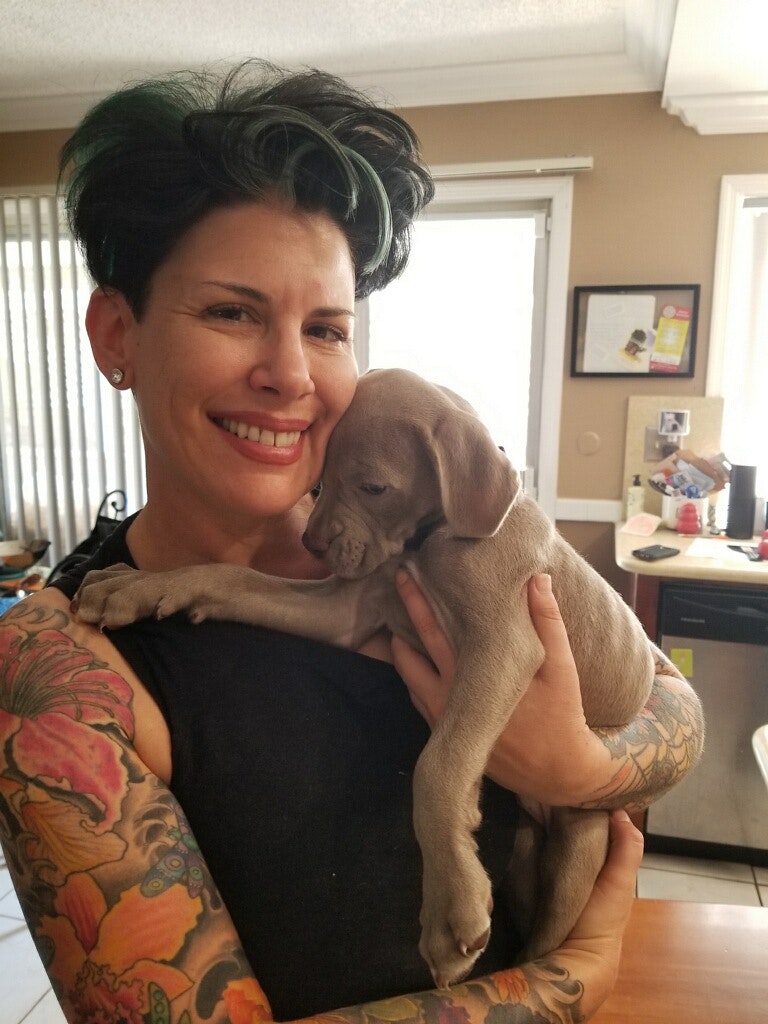 I got my first tattoo maybe two months after I turned 18, which was in 1989 — and back then, it wasn’t very fashionable to have these full pieces; people got one little small piece. I got this Egyptian thing on my back, and that was that.”

Throughout my 20s and 30s, I collected a couple of pieces. They were all black and grey. It was kinda not a big deal, but at the same time, I always worked in a pretty square environment, so I felt like I had to cover them up and be very conservative. It wasn’t until I was about 37 that I decided to really go for broke, and I’m glad I waited, because frankly I would have had a lot of really sh*tty tattoos had I not. That was when I started really getting into color, sleeving it out and doing the whole thing.

Now, I just turned 48, and I have to say it’s kinda funny: I call my sleeves my passport, because almost everywhere I go, people want to know me. They just say, “Oh, what do you do?” I get overwhelming positive feedback on my tattoos, and that’s something I never would have imagined when I was 18 years old, because it was still a rebellious thing. Now, in a way, I get carte blanche wherever I go, because I show up with these beautiful tattoos, and everyone’s like, “Hm, who’s this?” That kinda ties into the whole punk rock thing, too — because that’s kinda what my tribe is. Everything that was so rebellious is now very much embraced and even seen as attractive. That’s something I never would have foreseen in a million years.

I don’t regret any of my tattoos. I have some very old ones, dating back to when I was 19 and 20. It’s almost like I’ve had them for so long, they’ve become so much of an integrated part of my body that I don’t even see them anymore. I mean, I literally can see them on my body every day, but I don’t even acknowledge them. They’re just kinda this part of me, and when people ask me ask me if I’m going to regret them, my answer is, “Well, no. Do I regret the fact that my legs are this many inches long?” There’s nothing I can do to change these things: Once they’re applied to your body, that’s it. You can’t change anything about it. Regretting a tattoo is a non sequitur. It’s a question that I never even consider.

Ironically, my tattoos are relatively new. I chose to get them within the last couple of years, and I sort of had put off getting tattoos until I was older, actually, so I don’t have a ton of them. I think a lot of it was just, I’ve always loved tattoos, but the time never seemed right. For me, they’re an expression of specific things, so I have tattoos that are very meaningful about something that, in this case, my girlfriend and I came up with. They’re about, I suppose, the passages in life, shedding some things and gaining others, reminders of things that are important to me.

To be honest, I’m looking forward to more tattoos […] some or all of the tattoos I still want to get are my own drawings. They sort of just represent me. Tattoos are something I’ve always appreciated and thought about — I’ve had other drawings where I was like, “Okay, I’d like to get this done.” But the timing was never right. 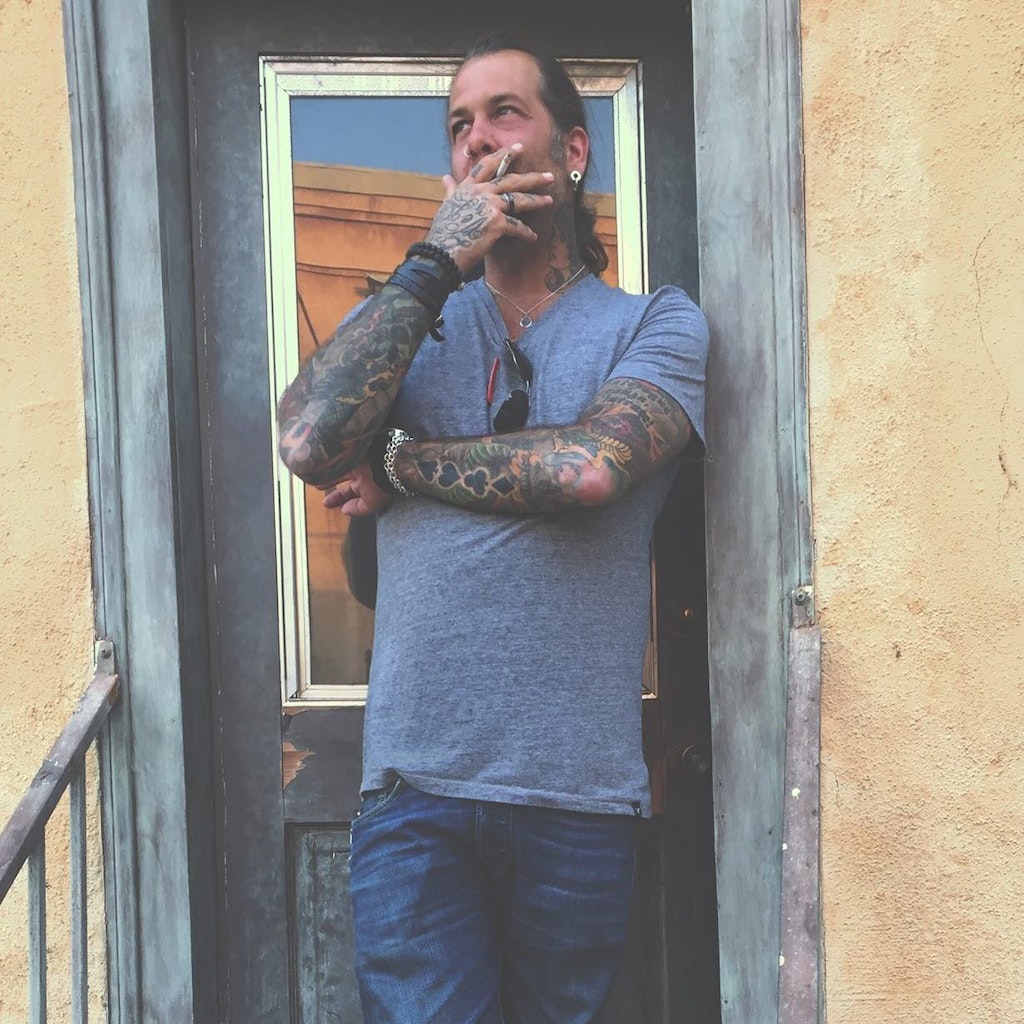 I got my first tattoo on my eighteenth birthday, way back in 1995. This was back when it was still a “rebellious” thing to do, especially in the very conservative small town that I grew up in. Basically, the only people there who had tattoos were bikers and criminals. But I was all into punk rock thanks to my erstwhile girlfriend and getting a tattoo was an effort to be more punk, so I got it from a bunch of tweaker bikers in a filthy shop in this sh*tty part of Raleigh, North Carolina. Of course, it being the 90s, I got this awful little tribal tattoo on my left arm, right above my sleeve — so I could hide it from my parents, obviously. It’s covered now, just like most of my old tattoos.

I had a bunch of really crappy tattoos that I got from sh*tty shops during my 20s. Since tattoos were still underground, finding great artists wasn’t easy and was way more expensive. It wasn’t really until I got older and was making decent money — and when the tattoo “scene” exploded — that I met the guy who’s done 90 percent of my work. That being said, I believe you should go through getting the cheap, crappy ones before going all in on big, expensive work. Small, cheap crappy tattoos can be easily removed nowadays if it turns out you’re not the same person that you were at 20 years old.

Like I’ve always said, there’s a difference between “having a tattoo” and “being tattooed.” Being tattooed is something that becomes part of your identity: For me, that’s the route I decided to take. When someone first meets me, they aren’t going to say, “Hey, this guy’s an iOS developer!” They’ll say, “Woah, that dude has a lot of tattoos!” I guess I feel like my older tattoos were a sort of rite of passage, especially in the old days when they weren’t as socially acceptable.