There’s an adage among entrepreneurs that you solve for the problem you have. Socially inept? Build a social network. No fashion sense? Create a personal styling service. Too busy to eat? Invent a soy-based meal substitute that tastes like liquified plywood.

This compulsion has led to some of our generation’s greatest innovations — Travis Kalanick thought of Uber after he had trouble hailing a cab in Paris, for instance. But sometimes it leads to innovations that have little function outside the tech echochamber; nowhere is that more evident than with Surf Air, a subscription service built specifically for wealthy, California-based, jet-setting tech executives.

Founded in late 2011, Surf Air offers unlimited luxury air travel throughout California and Las Vegas. For $1,950 per month, individuals can fly as much as they want between the following locations: Carlsbad, Lake Tahoe, Las Vegas, Los Angeles, Monterey, Napa Valley, Palm Springs, Sacramento, the San Francisco Bay Area and Santa Barbara. Flights can be booked from the app and take off from private airports with no security lines — riders need show up only 15 minutes before their flights, as opposed to two hours when flying from public airports. Each Surf Air-port has a business lounge, and the planes themselves are “custom-designed executive aircraft” with interiors from Bespoken New York, a high-end men’s fashion label.

It is the pinnacle of high-class business travel, offering the best in both luxury and efficiency.

But does it make sense economically?

If you’re a jet-setting business person, absolutely. For the rest of us, not really — or to be generous, not yet.

Surf Air seems like a raw deal at first blush. Savvy travelers can get round-trip, midweek flights between San Francisco and Los Angeles — say, for a business trip — for around $200 on Kayak, while the seriously frugal can find them for as low as $130 on Skiplagged (provided they’re willing to book a “hidden city” fare and risk upsetting the airline).

Even if you lived in San Francisco and had a standing work meeting each week in Los Angeles, and each flight trip was on the high end of the range ($400), you’d end up spending only $1,600 a month on airfare. You’d need to book at least one more $400 trip to get your money’s worth, or more to be getting a deal.

But Surf Air customers are not the kind of people who spend inordinate amounts of time searching for discount airfare or waiting in TSA lines, or who would even consider sitting coach.

Surf Air makes clear it’s intended for people of a certain means and profession. All of its locations are either tech hubs, entertainment epicenters or deluxe vacation destinations. The lone exception is Sacramento — but flying there is vital when your startup runs afoul of California labor laws. Tellingly, all the testimonials on Surf Air’s site are from founders, virtual reality “pioneers,” hoteliers and TED talkers. Almost a third of Surf Air’s clientele works in tech, followed by finance and biotech.

These are the kinds of people who’d sit business class for their super-commutes throughout California and spend each weekend in wine country or chilling out in Palm Springs.

A midweek flight from San Diego International Airport to Reno-Tahoe International — the rough equivalent to the longest trip Surf Air currently offers — currently starts at about $400 for “premium economy” seats and $600 for first-class. Surf Air begins to make sense for a frequent flyer who expects relative opulence, then, and even more so when you consider that many business travelers buy refundable tickets, which are magnitudes more expensive than “regular” first class seats.

The economic benefits are even more pronounced if you try to replicate the Surf Air experience by chartering your own private flight, which typically runs about $3,000 per hour with a two-hour minimum. And Surf Air also offers specialty group rates, which businesses can use for their heavy travelers.

So for now, Surf Air is a viable option only for the kind of playboys and –girls who annoy us on Instagram. 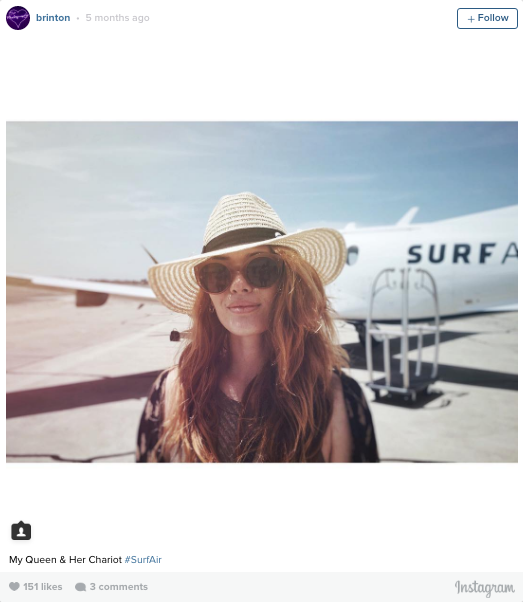 But if Uber, Silicon Valley’s most successful transportation-based startup, is any example, then Surf Air might be able to move down-market and bring subscription-based air travel to the masses.

Uber is so pervasive now that its name is often used as a verb (“I’m Uber-ing over now”) or as a handy way for startups to explain what they do (“Uber for alcohol delivery,” for instance). But long before it was part of the lexicon, Uber was a luxury service, a way for the rich to get fancy black cars to pick them up on demand, saving them from the terror that is flagging down a taxi. It’s since trickled down to the masses, proving that while innovation often starts with the ultra-rich, massive success comes from catering to the greater public (mostly by pumping in lots of VC money to keep prices very low).

Surf Air does have designs on expanding its customer base. This fall, it plans to roll out a version of its service for European travelers, offering unlimited flights between London, Paris, Berlin, Ibiza and other cities for 3,250 euro per month. Meantime, the rest of us will have to keep Kayak-ing like suckers.