Twitter user @horchatata had her 15 seconds of internet fame earlier this week when she tweeted a screenshot of this excellent Reddit thread from Sunday: 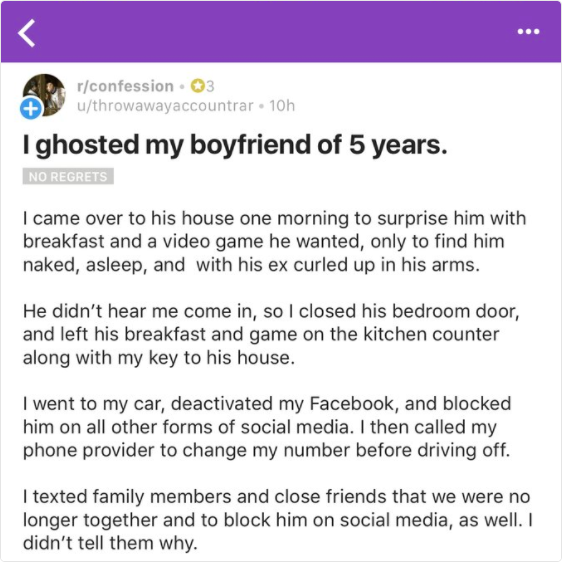 In short, a woman discovers her boyfriend of five years sleeping in bed with another woman, and rather than wake and confront them, she leaves without saying anything — and never contacts her ex again. No explanation. No goodbye note. Not even the slightest indication that she grew wise to his infidelity. She catches her boyfriend red-handed, and immediately deactivates all her social media accounts, changes her phone number and drives away, never to be heard from again.

Far as the man knows, his now-ex girlfriend was raptured into the skies; vaporized by a secret government death ray; or relocated to Montana, where she changed her name to Elation and lived out her years as a crystal healer.

She, in effect, vanishes, which is a remarkable feat in the social media era.

The tweet has received more than half a million engagements as of this writing, which is an astounding number for a woman with less than 2,000 Twitter followers.

The tweet’s popularity is a testament to how rare and heroic this woman’s actions are. She’s an inspiration to us all. Because unlike the rest of us, she not only had the clearness of perspective to realize the relationship was, in fact, over, but the courage to end it swiftly and definitively, and thus, as painlessly as possible.

We lesser mortals, however, are prone to the dreadful multi-part breakup — a phenomenon whose raison d’être is to make the already painful process of breaking up as long and agonizing as possible.

Shortly after the Reddit thread made its way to our office, I sheepishly admitted to participating in several multi-part breakups in my lifetime. And to my amazement and perverse joy, I realized I wasn’t alone. Nearly every single member of the staff copped to having multi-part breakup experiences as well. It might be the first time in our history that there was near-universal agreement on a topic.

Every multi-part breakup is as unique as the relationship it ends, but they all follow the same general script:

Weeks (if not months, or sometimes even years) of gradually recognizing you and your partner are not right for each other.

Just reading that, I feel embarrassed about my past actions. The multi-part breakup is totally irrational. The logical thing to do is to be like the woman from the Reddit thread and disengage completely.

But relationships render even the most sensible of us crazy.

“I have been a multiple breaker-upper,” Senior Editor Nick Leftley admits to me.

At first, it’s reassuring to know Leftley, possibly the most hyper-rational person I’ve ever met, is as susceptible to this foolish behavior as I am. “Even as I was doing it, I was mystified by my own actions,” he adds. But there’s something disturbing that all of us can know the multi-part breakup is unhealthy and still do it anyway.

My friend Heather* recently ended a relationship, and despite being one of the most romantically and sexually well-adjusted people I know, she too has struggled to put a permanent end to her defunct relationship. They broke up, tried to get back together, broke up again, tried to distance themselves from each other and then exchanged some DMs before calling it quits for good and going incommunicado.

It’s tempting to blame the multi-part breakup on social media, which keeps our exes annoyingly accessible and present in our lives. I, for one, long for a simpler time when you could actually forget the ghosts from your romantic past. But that’s a superficial answer.

“Intellectually, I’m happy we broke up,” Heather says. “But it’s sad, and I’m trying to enjoy myself without creating a new codependency.”

Heather, salient as always, strikes to the heart of the matter — a swift breakup is the logical thing, but our emotional needs have a nasty way of defying logic.

In searching for reasons why the multi-part breakup exists, I looked back at this piece I wrote a year and a half ago about why people stay in toxic relationships, and found that all the explanations experts gave me also apply to the multi-part breakup. We engage in multi-part breakups because we (falsely) convince ourselves that our partners will change. We hold out hope that somehow things will work themselves out. We’re so scared of the stigma of being single that we’d rather stay in a relationship that’s seriously flawed. Or we’re so broken emotionally that even an unfulfilling relationship seems better than being alone.

The multi-part breakup is a function of a society that tells us it’s worse to be alone and self-sufficient than partnered and unhappy, and that a breakup has to be a heart-wrenching emotional exercise instead of an honest admission that the relationship has run its natural course — and that both parties will be better off if they separate.

The only solution, then, is to change social norms such that we have a more honest, nuanced view of monogamy, love and what constitutes a “successful” relationship. Which is to say the multi-part breakup is sadly here to stay, in all its horrid, protracted glory.

But if you can muster the gumption, do like the Reddit woman, and nuke your online presence and ice that jerk out of your life forever. You won’t get any fun post-breakup sex, but you’ll be infinitely happier.