The year 2019 had scarcely begun when a few lucky fans ran into Lionel Messi, arguably the top soccer player in the world at the moment. He was all too happy to stop for a few selfies — selfies that conclusively showed he was driving without a shirt on.

Now, you’d be hard pressed to hear anyone complain about seeing Messi shirtless. Soccer, in general, is a sport marked by dramatic shirt removal, be it for celebratory reasons or to protest the officiating, and the stars of the sport have the kind of physique that begs to be flaunted. But if you were to encounter a shirtless driver while going about your daily routine, it’s almost certain to be someone less, shall we say… athletic?

Online forums devoted to interests as diverse as guitar tabs and bodybuilding have failed to come up with an answer. “I usually do it on hot days … my car has leather seats and no AC. My back sweats ridiculously, I’m not even fat 6’2” 175-180, and not too muscular,” one proponent of shirtless driving has written. “I wear an undershirt and a regular shirt … on really hot days both shirts will be damp from sweat and most likely will smell, so I usually drive with my shirt(s) off.” He did add one caveat, though: “Got pulled over (only time in my life) and I was shirtless, probably the reason I got the ticket.”

A poll on Bodybuilding.com that sought to establish whether driving without a shirt on is “Yeah” or “Naw” behavior ended in a dead heat, suggesting that even some dudes with pronounced pectorals frown upon the practice as uncouth. “Only people I see doing it are fat truckers lol,” commented one voter, and there emerged a vague consensus that “redneck” types are prone to blasting naked chest behind the wheel. Yet Google Search’s autocomplete for “driving shirtless in” served up far-flung regions. Apparently it’s as common in Michigan as it is in Florida. Also, you can get fined for it in Thailand. Fascinating. 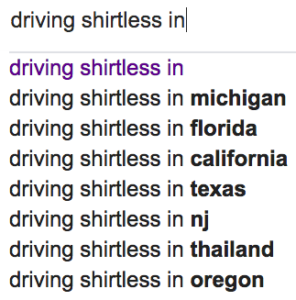 Perhaps, however, we ought to weigh the reasons for driving shirtless, rather than what it says about the driver. These seem to range from the practical (heat, sweating, post-swim-or-workout) to the pleasure-oriented (“I just enjoy the sun on my skin,” one redditor explained, and I’d guess he finds a light breeze on his nipples equally nice).

Yet we’d be missing an ineffable appeal of this pastime if we chalked it up to questions of mere comfort and exhibitionism. For there is also the bliss of shirtlessness for its own sake. The flabby, ordinary man will frequently remove his shirt not because he must, or in hopes of courting flirtatious stares, but because he can, and because he does not care. His car, whether Jeep, truck or midsize sedan, is his vessel between realms where others set the rules — inside it, he is free to be his natural, nearly nude self.

The fact is, men are constantly on the lookout for opportunities to take their shirts off: sports games, strenuous exercise, music festivals in the desert, one-night stands, hazing rituals, rowdy pub crawls, erotic massages, messy eating contests… basically, any venue that doesn’t have the “No Shirt, No Shoes, No Service” sign is fair game. And a personal vehicle is among the more convenient places to strip to the waist. If anything, we should be surprised that any man is self-conscious enough to submit to the humility of clothing as he barrels down the interstate. It is only pretense, vanity. The shirtless driver is unbound, except by his seatbelt, and alive to the machine he pilots.

Yeah, it’s as simple as that. Low risk, with a wholesome and instantaneous reward. As one guy indifferent to the larger discourse over shirtless driving has asked: “Why don’t you just do what you want to do and not care about the opinions of people you pass on the highway who you’ll never see again in your lifetime?” There’s the rub: When it comes to sharing the road, we want our fellow travelers to use turn signals, obey stoplights and let us in during difficult merges. A shirt never helped anyone steer straight or parallel park. What the guy in the next lane has on is fairly irrelevant to your journey.

So it may as well be nothing.