Kenneth Tam is an artist who (among other things) makes videos of men — men that he finds on the internet and then pays to do awkward, intimate, absurd things on camera. These videos are amazing.

For one of his most recent projects, Breakfast in Bed (which is currently playing at L.A.’s Hammer Museum as part of its Made in L.A. 2016 show) Tam found a group of seven men from Reddit and Craigslist and assembled them in a wood-paneled recreation room he’d constructed in his studio. Then, for nine weeks, for at least two hours each week, Tam filmed them undertaking a peculiar set of activities.

Strange as it sounds, watching these men from the internet move around, touch each other, and try to talk through the weirdness (often without their shirts) adds up to one of the most poignant portraits of American masculinity I’ve ever seen. You can’t help but see yourself in every delicate touch or nervous laugh, each brave attempt to play it cool. It’s as if Tam took all the bro hugs, all the stilted father-son bondings and all the locker-room shyness that plays out each day across this country, then distilled it down to its gestural essence for all of us to see.

Tam was in LA this week to install his new show, opening July 30 at the Koreatown gallery Commonwealth and Council. So MEL took the opportunity to talk to him about how he does it, what he was going for and how he ended up becoming an artist of male awkwardness. 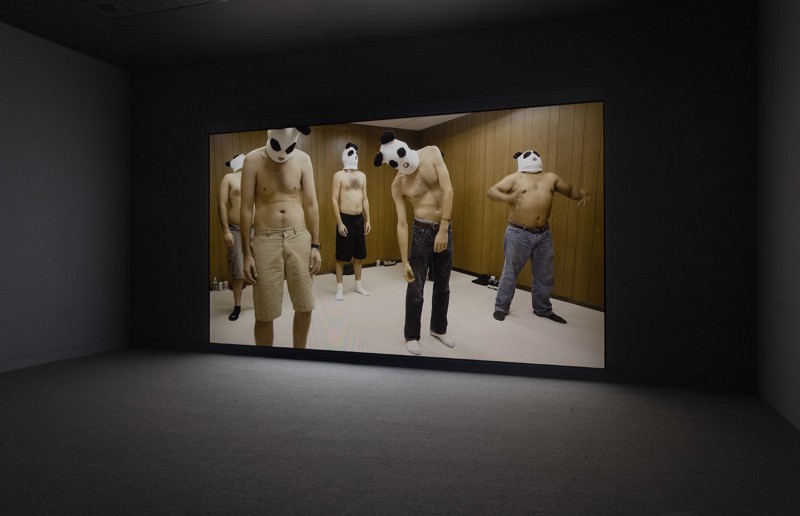 How did you come up with all these weird assignments for the group?
I did a bunch of research into other sort of male-only activities — religious retreats, corporate team-building exercises — where men sequester themselves away from women or their families or whatever to do things physically, just with each other. So I had images of what I wanted.

At one point you get the group to try dancing together in a circle while wearing jingle-bell belts — what inspired that?
I was actually looking at Hasidic weddings, which are these super-intense male-only ritualistic activities involving dance and also like, intense earnest joyousness. I haven’t seen one live, but if you watch enough videos you’re like, wow, there’s this incredible homosocial affection being generated.

How about gluing Cheerios to each others’ bodies?
I did it with my father first [for his 2015 video sump, in which Tam recorded himself and his father acting out rituals like blowing up balloons in the bathtub together or finger-painting each other’s torso]. It was just about the final image in that video, but through doing it I realized like wow, what an intimate activity — let me get someone else to do it on camera. 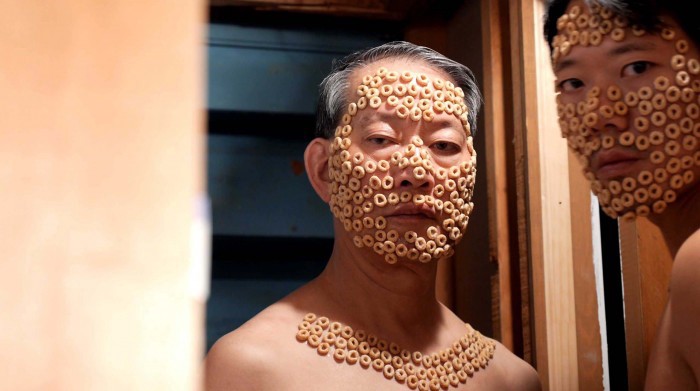 Did working on that video with your dad, or gluing Cheerios to his body, change your relationship?
It’s kind of funny — no, not really. Sadly. I think we’re a little closer, or at least more casual with each other, but it’s almost like it didn’t happen.

The Cheerio-gluing was the first activity you had the dude group do, right?
Pretty much. That was really the first time they were getting to know each other, and the conversation reveals that feeling-each-other-out sort of thing that guys do. 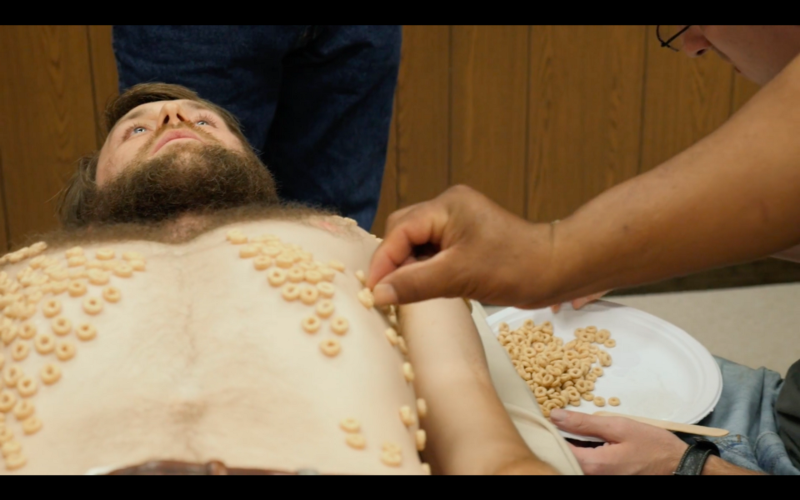 What were you trying to get at by making these guys do these activities?
I knew that there would be certain pressure points that I wanted to get at, generic discomfort zones of men in groups, just based on my own experience and observation. And I wanted to center the activities around these areas of potential discomfort.

They weren’t meant to be punitive, or humiliating, I was just curious how they would respond. I think so much of masculinity is just about negotiating awkwardness, being able to maneuver it, or laugh it off, without recognizing the potential for vulnerability.

Is this meant as a critique of masculinity? Or more of a documentation of how it looks?
There is a critique, but I think it’s subtle. At least with Breakfast in Bed, I’m not making it to critique any sort of idea of normative masculinity. It’s not meant to expose that or make fun of it. That critique exists, and it’s a really easy one to make, but I’m more interested in taking what exists and sort of expanding it, pushing it further. 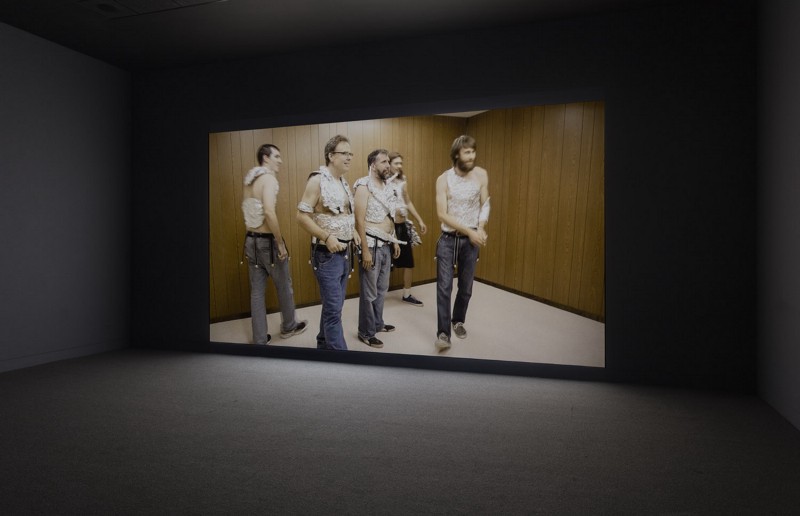 So what are you looking for, then? What makes a moment worth including in the final cut?
It’s a moment when you’re watching these guys do whatever activity it is and a space opens up that doesn’t conform to anything you’ve seen before. You see these guys being vulnerable in a way that’s very moving, because it runs counter to what you expect them to do.

Some of the scenes that people have found most successful are the ones where the dudes were speaking directly to each other and complimenting each other. They had such a hard time with such a seemingly simple task, just saying something positive, that I ultimately had to just say like, you don’t even have to be positive, just look at this guy and tell me what you see.

What makes that kind of straightforward sincerity so difficult for men?
These guys just don’t have the language for it. I think that’s very affecting — you see the other guy who’s listening very awkwardly and unsure how to respond, because he’s never been complimented on his body before. 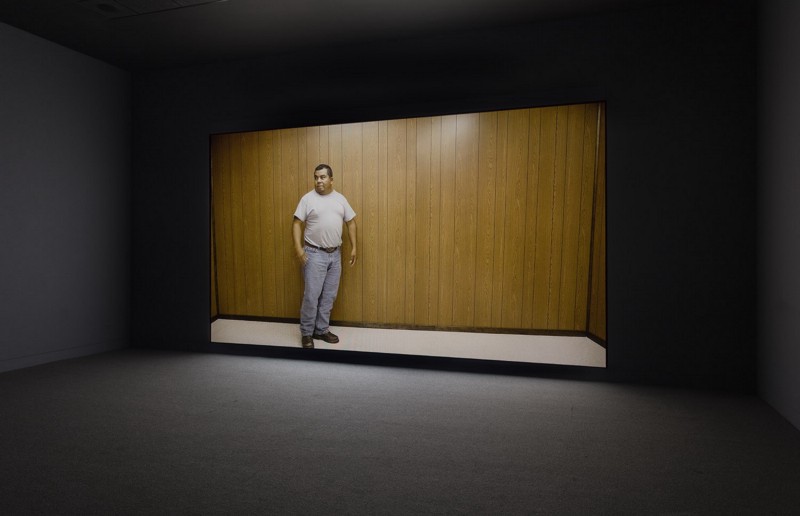 The video has a very gentle tone — it never seems like you’re making fun of these guys — but were you worried that forcing a group of men to do silly things might come off as mean-spirited?
Yeah, or exploitative. I try to be as generous and transparent and vulnerable as possible. I try to make it seem like I’m in it with the guys.

Has your work made you more self-conscious of your own awkward masculinity?
Oh absolutely. Absolutely. But I still fall into these traps and behaviors, I’m just as socialized and conditioned. These are scripts that are written for us that we have to navigate every day — every minute — of our physical lives.

Have you always focused on making work about men?
When I moved out to L.A. for grad school, Craigslist was really my initial interest. I liked how even the simple exchange of goods required you to enter into someone’s space, they give you permission to come into their home — Craigslist normalizes this strange activity, and I wanted to exploit that for my own artistic ends.

So I started to post ads in the gig section, mostly in “labor” or “creative,” looking for people to work with me on videos doing various different things. In the beginning they were very straightforward, like let’s just sit in a room together and stare at each other or something, pretty much avoid of all intimacy other than the fact that I was in this person’s home that I’d never met before. 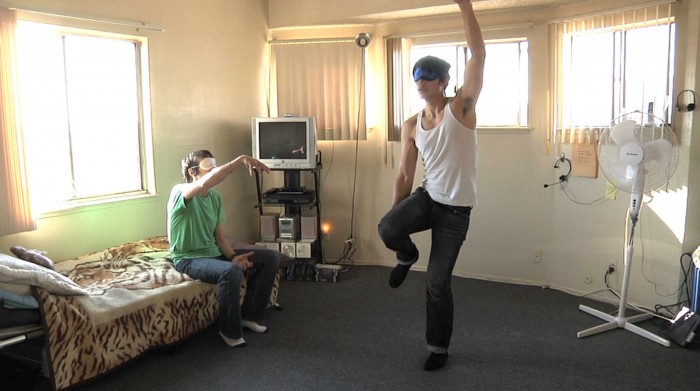 Was there one especially weird Craigslist experience that inspired you?
I thought they were all weird [laughs]. At first I was doing this in New York, and I would end up in really strange places — I remember I was buying some Ikea furniture and ended up in this Hasidic rabbi’s home somewhere in the Bronx, this space I would never have access to otherwise. It’s like a wormhole into people’s interior lives, and that really was quite exciting for me.

The group in Breakfast in Bed seems to be entirely straight. Was that on purpose?
No, when I was recruiting these guys, I never mentioned sexuality in all the language I was using in the ad and how I was talking about it. I didn’t want that to enter into how they were thinking about it.

But I do think straight masculinity is the most repressive, or oppressive, and that’s definitely interesting. I have worked with men that were gay, like in the box video [The compression is not subservient to the explosion; it gives it increased force, a video Tam made in 2011], that was very much about an idea of sexuality that this gay man was projecting onto me.

I guess Breakfast in Bed does hinge upon a certain straightness, but I could imagine that gay men might react the same way too, I think just being in a group still elicits the same tensions, or discomfort.

It’s also made up of five white and two Hispanic men. Was that intentional?
Again, not particularly. I mean the thing was, I recruited a lot of guys from Reddit. I didn’t know this going in there, I just thought it was another sort of space, but apparently the guys that use it are generally white, sort of tech-familiar dudes, so that’s one reason it looked like that.

But of all the people that I interviewed, or who even approached me to participate, I found no African-American men at all, and only a few Hispanic, a few Asian, but mostly white. So I think the project itself is already like somehow unappealing from the minority perspective.

Do you think that being an Asian-American man has something to do with why you’re interested in this kind of work?
That’s an interesting question. I’m not sure it’s even about race, but I’ve always kind of felt like an outsider, or I’ve always enjoyed being in a position of looking in from the outside. I think certainly that allowed me to do some of the early work, like sitting in someone else’s house and just watching them and not speaking.

That was very awkward for me, but certain people would never want to put themselves in that position, whereas I’m always very fascinated by and drawn to that position. I’m not sure how much that has to do with my own ethnicity and my own ethnic background, but I think it does play into it to some degree.

Why did you recruit from Reddit, rather than Craigslist, for this project?
I found that with Craigslist, the encounters are always based on immediacy, like if you don’t have the couch ready right now the guy’s not gonna come and buy it from you, or if we can’t hook up right now i’m not interested in you. So when I was casting for Breakfast in Bed, I realized that these guys [from Craigslist] were not going to come back again and again.

Reddit’s like a totally different space. I put the ad out there thinking I would find more responsible people; since people come and establish identities, it’s more stable.

Have you posted the finished video on Reddit?
I would never post this on Reddit. That space is so volatile, so misogynistic in a group way, when it comes to the comment section — it takes masculinity to this really perverse, dark place really quickly, and I’m interested in that. But I would not put this up there. It doesn’t deal with complication well, at least from what I’ve seen.