Don’t have three hours a day to spend at the gym? Not interested in bulging like a bodybuilder? Unmoved by promises of “fat-blasting, ab-chiseling monster workouts?” This is the column for you, fellow regular human with very little free time.

His Time Commitment (Or Lack Thereof): “I generally get out of bed at 7 a.m. and into work by 8 a.m., where I work at a desk in front of a couple computers until 6 p.m.,” Matt tells us. “I usually bring work home for a couple hours. I enjoy cooking quite a bit, but there’s a depressing element when I finish a beautiful meal and I’m the only one around to eat it. I’m very much a night owl; I’ve lived on about four or five hours of sleep a night since I was a teen. I’m currently on medication that helps me to get to sleep, but it also leaves me feeling foggy in the morning.”

Exercise He’s Actually Willing to Do: “I tore every ligament in my left knee a few years ago playing basketball, including my meniscus, so I can’t play sports that involve frequent cuts,” Matt explains. “Jogging and running also are painful — I can get to the point where I can jog for 30–40 minutes, but it takes a month-plus to build up a pain tolerance. I also run extremely hot — I can’t sleep unless it’s frigid in my room — so I sweat heavily at even the most minimal of workouts, meaning I would have trouble doing a workout before work or over lunch.”

Why the Gym Doesn’t Really Work for Him Either: “During the winter in Wisconsin, it’s a hassle to drive anywhere,” Matt says. “Between the 20 minutes to heat up the car and scrape the ice and snow off the windows, as well as the terrible roads, I try not to go anywhere but work, the grocery store and home. I have a gym membership, but it’s about the furthest possible distance from my place and my work. I’d prefer to workout in my apartment if possible, but it would have to be fairly quiet because I don’t want to piss off my neighbors above me.”

What He Wants: “I’d like to drop 20 pounds, or replace some fat with muscle,” he says. “I don’t need to get huge or ripped, but more tone would be great. I’m a good athlete and generally try to play sports year-round, but it’s never enough to qualify for a great workout. I’d be most likely to stick with a workout plan that maximized energy in the shortest amount of time. As far as a meal plan goes, I’d love to know what kind of food I can cook on the weekend and eat throughout the week.”

Stop Working So Much: “What you need first is to find yourself a motivator to help you put your priorities straight,” says personal trainer Lalo Fuentes. “You’re working too much and not taking care of your health or your life; if you continue like this, you’ll be having many more lonely dinners. I get that you need to pay your bills, and for that, you need to work hard, but make sure you live first. Your job should be a part of your life, not the other way around.”

Become a More Active Night Owl: “Given your schedule and penchant for late bedtimes, the best time for you to exercise is at night,” Fuentes advises. “After an intense workout, you should have a quick bite, shower and go straight to bed. If you try to stay up after exercising, you’ll teach your body to be energized at night instead of relaxed and sleepy.”

The Workout Itself: Because Matt’s knees are shot, Fuentes suggest low-impact cardio exercises that are easy on the joints. Something akin to the following:

Stop Eating Leftovers: “You shouldn’t be eating food that’s been sitting in your fridge for a week!” Fuentes scolds. “Use cooking as a way of entertainment and to unwind in the evening. That said, quinoa can last three days and is easy to make — you can add some vegetables as well as protein like chicken or eggs.”

Bring the quinoa and broth to boil, then close lid and turn the heat down low. Let it simmer for about 8 minutes, or until the grains have opened up. Turn off the heat, add whichever vegetables and/or protein you enjoy, stir and let sit for three minutes. Stir one more time and serve.

“If you want to make it more interesting,” Fuentes says, “try adding a little yellow curry paste at the beginning. You can use the quinoa for breakfast in the morning, too — just add two soft-boiled eggs and a spoonful of chopped chives.” He adds, “You also can get creative with different kinds of salads, which take no time at all to make.” 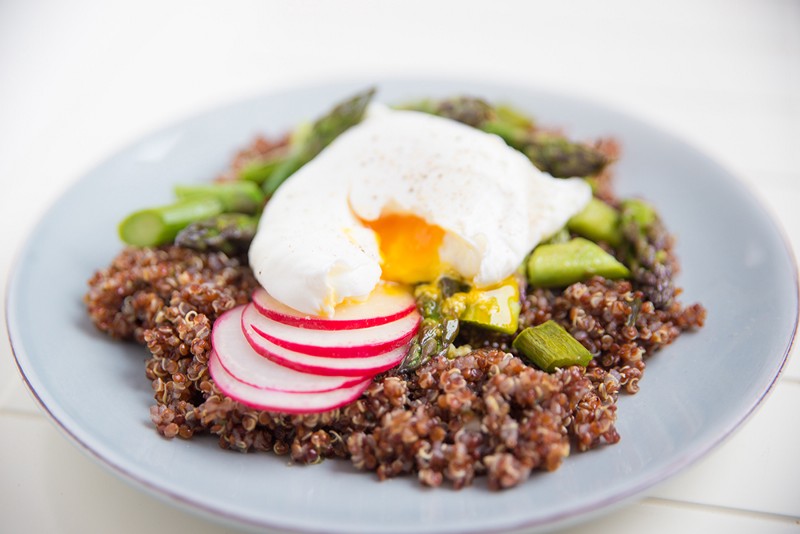 Matt, Does This Work for Your Knees — and Appetite? “I like the plan quite a bit. My biggest thing was getting a good workout without pissing off the neighbors, and this fits the bill. My arms and shoulders ache, but that’s got to be a good sign, right?”

Do You Think It Will Help With Your Sleep Issues as Well? “It’s too early to tell. Going straight from a workout to bed is a radical adjustment. I’m giving it an honest shot, but it’s still very strange. I might end up doing the workout when I wake up in the morning.”

How’s the Quinoa? “I’d never had quinoa before last week. It’s nowhere near as disgusting as it looks!”