Don’t have three hours a day to spend at the gym? Not interested in bulging like a bodybuilder? Unmoved by promises of “fat-blasting, ab-chiseling monster workouts”? This is the column for you, fellow regular human with very little free time.

His Time Commitment (Or Lack Thereof): “I’ve been at this for about two and a half months now,” Josh tells us. “I’ve found a way to dedicate 60–90 minutes per day to running anywhere from three to nine miles — I started with the Couch to 5k app, graduated to the 5k to 10k app and am now about a third of the way through 13.One, the half-marathon training app that’s next in the series. This time, however, does come at the expense of sleep. Currently, I’m only clocking about 4–6 hours each night.”

Exercise He’s Actually Willing to Do: “I used to only play team sports — basketball and softball mostly. But as I got further and further away from peak physical condition, I decided the only way to whip my flabby ass back in shape was to start running. It was brutal at first — I’d never run much at all in my life beyond up and down a basketball court or around the bases — but now I can consistently move at a pretty brisk pace for 90 minutes straight, or a little more than nine miles.

“I also used to spend about an hour a night on a stationary bike so I’m really comfortable biking. For the triathlon, I’m mostly wigged out about the swimming for a couple of reasons: 1) It’s not as easy as putting on running shoes or jumping on a bike — i.e., I have to go to a pool and swim among other people who have been doing this for much longer, and basically figure out how to turn my doggy paddle into something that’s realistic enough to travel 500–1,000 meters (however far that is, I have no idea); and 2) the race itself is in open water, which I’ve heard can be super tough to adjust to and throw off the rest of the race.

What He Wants: “More than anything, not to be considered a ‘manatee,’ which is the classification for dudes who run the triathlon at more than 220 pounds. (Ultimately, I’d like to get down to 205 pounds for the race, which is about three months away.) Second, not to embarrass myself in the water. Third, to make this a true lifestyle as opposed to a bucket-list thing.

“That is, I’ve been running all of these 5ks and 10ks as motivation to get my ass in shape for this big race, but I don’t want to stop once I’ve accomplished it. I’m not saying I want to compete in an Ironman, but I would like to continue to challenge myself physically like this and get my body back to where it was in my early 30s for as long as it can hold up.”

Hit the Sack: “The first thing we need to fix is your sleeping patterns,” says personal trainer Lalo Fuentes. “Four to six hours of sleep per night isn’t enough: Your body needs to recuperate from the exertion you are putting it through.

“Even if you weren’t exercising as much as you are, you still need at least six to eight hours of sleep for your body to recover fully. While we sleep, our body releases the highest levels of human growth hormone, which is essential for maintaining high energy levels, bone density, muscle mass and proper brain function. This hormone is released less efficiently as we grow older, so we have to pay special attention to facilitating the process by sleeping well and eating natural foods that register low on the glycemic index (e.g., fruits, whole grains, legumes, nuts, vegetables without starch).”

Drop a Little More Weight: “At your height and weight, it will be nice to shave those extra 20 pounds before the marathon. Getting down to 205 pounds will not only make you faster during the race, it will make you feel better as well. The best way to do so is by cutting down your portions by 10 percent every two weeks while maintaining a balanced diet. This might sound hard, but since stomachs are elastic by nature, they expand or shrink at a slow pace. If you cut your portions at this rate, you won’t feel hungry, and it’ll be a goal that’s surprisingly easy to accomplish.

“In terms of what you’re eating, make sure to cut pasta, white rice and bread from your diet. You can get your carbs from other sources that are healthier and more filling: Lentils, beans and quinoa are all good substitutes. Every meal, you want to have lean protein, healthy carbs from grains, vegetables or fruits, fat from avocado, extra virgin olive oil, almonds and a suitable quantity of fiber. Your body will function better, and it’ll keep you satisfied for a longer period. If you feel hungry shortly after a meal, check to see if your meal had too many carbs compared to the other elements — it’s all about balance.” 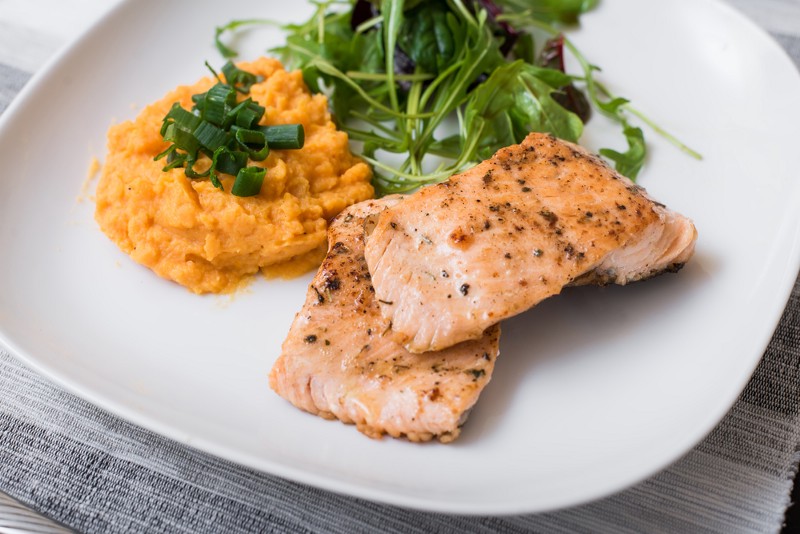 Call in a Pro: “I highly recommend you get a swimming coach and practice your technique — once this is good, the endurance you’re gaining with your runs will make you a much better athlete.

“Before you go into the open water the day of the race, you need to be aware of any currents and wind conditions; otherwise, you’ll aim toward the point where you want to go, but end up somewhere else. When you’ve figured out where the currents are coming from, you’ll need to adjust your direction against the current by as many degrees as you feel necessary. It’s a good idea to practice your swimming in the open water at least once per week — this will make you feel much more comfortable in the water and will give you a better understanding of keeping on course.”

Don’t Let Yourself Quit: “One way to keep you motivated and exercising regularly is by participating in races consistently. Sign up for your next race right before the day of your current competition — that way, there’s no backing out, and you’ll always keep a race on your calendar. Make sure you leave enough days of rest to let your body recover before you start training for your next triathlon, though.”

What Are the Chances of You Being Able to Get Seven Hours of Sleep a Night? “Zero,” Josh says. “I work a lot and have a similar number of family obligations. So while I would love to get a good night’s sleep to provide some rest for my muscles, too, it’s impossible. The trade-off is not working out, which I did for far too long, and refuse to do again.”

Are You Now Less or More Worried About the Open Water Portion of the Swim? “Way more. I never even thought about the fact that the currents and wind could somehow blow me off the course and that I could end up floating aimlessly miles from shore — or at least that sounds way more plausible than melodramatic, which is definitely worrisome.”

Be Honest: Are You Ever Going to Eat Four Boiled Egg Whites With Lentils for Breakfast? “Yes. I already have two fried eggs after each run. I do, however, have them with one piece of toast. Obviously, the toast must now go. Replacing it with lentils won’t be a problem, though. I actually like lentils. That said, I’ve never had them for breakfast — or every day for breakfast.”

What Do You Think About Always Having a Race on the Horizon? Is That Something That’ll Work for You, or Is It Too Intimidating? “I do that now. I run a race almost every weekend. My concern is that I’ll get bored with them — or they won’t challenge me enough. That’s why I’m rethinking my stance on never doing an Ironman. That for sure will keep me motivated — as well as take at least another year or two to get in peak physical condition to survive it.”