The term boner is a misnomer: Despite the affectionate slang for an erection and the various ways in which the word “bone” factors into sex — e.g., boning and/or boned — the human penis contains zero bones. The same goes for the manhood of a few other notable mammals — horses, donkeys, rhinos, rabbits, whales, dolphins and elephants chief among them.

That said, the same isn’t necessarily true of the rest of the animal kingdom. In fact, since stiffness is essential to penetration and delivering sperm during sex, most mammals have a baculum (the fancy name for a penis bone). Dogs and cats have them, as do bears and bats. They vary greatly in size and shape between species, though the largest one on record belonged to an extinct type of walrus and clocked in at more than four feet.

The reason for this seemingly random erectile distinction was unclear until last month, when an evolutionary study was released by Matilda Brindle and Christopher Opie of University College, London. They analyzed anatomy and mating practices of thousands of mammals and determined that humans lost their baculum due to a penchant for fast mating and relatively little competition.

On the flip side, our ancestral primates engaged in prolonged intromission (i.e., screwing that lasts longer than 3 minutes). Brindle tells me a baculum is necessary for such marathon sex sessions because in these cases, it acts like a supportive rod and protects the urethra while still keeping it open. “Species in which multiple males and females mate with one another tend to have longer bacula, suggesting it plays an important role in postcopulatory competition,” Brindle says.

I took this to mean that humans don’t have penis bones partly because we cut back on the gang-banging 100 million years ago. For clarification, I reached out to David Puts — an associate professor of anthropology at Penn State who previously told us why a strong chin has always been a desired trait in men — to see if I was on the right track.

“The paper you linked to makes sense,” he confirms, explaining a phenomenon called “sperm competition in polyandrous mating,” which is essentially when males prevent other males (and their sperm) from entering their lady. “When more than one male mates with the same female during a reproductive cycle, the sperm of the males are often in competition, which favors such traits as large testes, high sperm production, and as this new research suggests, the presence of a baculum” — because all three will maximize the number of swimmers you have diving into the pool. 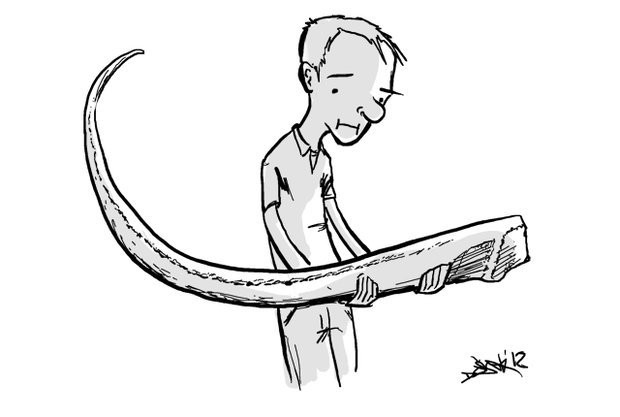 Another evolutionary factor in the disappearance of the baculum? Pain. Namely, the absence of a penis bone meant one fewer thing a man could break — a potentially catastrophic injury. This, posits our go-to urologist Alex Shteynshlyuger, is the likeliest Darwinian reason we dropped the bone. Broken penises are more frequent than you’d think. For instance: “In 2006, a tapir stepped on his baculum at San Francisco Zoo and broke it,” Shteynshlyuger explains. “Modern medicine could not help him.”

Avoiding stepping on our own penises is further evidence we’re slightly more evolved than a tapir.