As an old, washed-up rockstar drunkenly hissing into the microphone might say: This one’s for the fans. Recently, Mark, an apparently devout reader, wrote to us on Facebook asking for some advice on how to deal with a leaky coworker:

“How can I contact Andrew Fiouzi? I have a serious etiquette question/problem involving one of my staff members, and I’m thinking he’s probably the most reliable person to pose the question. It involves speaking to a staff member who always leaves a puddle of sorts after urinating in the staff restrooms. I hate that I have to be so ‘gross’ in my bluntness, but things have reached a delicate stage here at work between this guy and the remaining staff who are all women. Can you help?

First, thank you for noticing my work, Mark. It means a lot.

Now, let’s get into the matter at hand by beginning with a bit of background as to what may be causing the issue. Luckily, we’ve already written about some of the reasons why a man’s pee might spit out of his hose at varying speeds and angles — naturally, all of these explanations assume said male employee is having sex, and therefore, his pee stream may be affected by a series of blockades including but not limited to: A urinary tract infection; leftover semen; and hopefully not but also maybe, an erection.

Of course, none of these explanations forgive the fact that this dilemma seems to be, at best, a chronic medical issue and at worst willful hygienic ignorance. Either way, there are some ways to broach this slippery subject, none of which includes having to blatantly call out your fellow colleague in front of his peers. According to Diane Gottsman, an etiquette expert who previously advised us as to how best to tell your coworker that their fly is down, make sure you’re looking said male coworker in the eye and not his crotch. Additionally, according to our resident fly-down staff writer, C. Brian Smith, these sorts of uncouth conversations are best had in private.

“I least prefer when someone relishes (and vocalizes) their ‘gotcha’ moment,” Smith told us last year. “When they say something like a cheerful, ‘Um, you need to EXAMINE YOUR ZIPPER!’ I’m just like, go **** yourself in your throat, ***hole.”

Ultimately, any actual hygiene issue is going to be a touchy subject, so per our recent “Gentleman’s Guide to Telling Your Partner They Stink,” the most important thing in opening up this urinal can of worms is to have done your research. And luckily for you, Mark, I’ve done the research. According to The Week, despite your horror toward your colleague’s inability to pee straight, this is actually a fairly common issue. In fact, this seemingly simple act of male extradition is something that a team of fluid dynamics researchers from Brigham Young University looked into. “That splash is due to a fluid dynamics term called the Rayleigh Instability,” reports The Week. “Basically your stream loses power about 6 inches from the urethra, scattering your spray into messy droplets.”

So what was the researchers’ advice?

“…men should stand as close to the urinal as possible. Also helpful is directing the stream to hit the back of the urinal at a downward angle. That creates less splash-back and the drops that do bounce, head downwards into the urinal drain. Conversely, to prevent messing one’s trousers (or angering neighbors) they suggest men not spray directly into the urinal or into the pool that forms at the bottom of the urinal, both cause a lot of splash-back,” reports The Week. 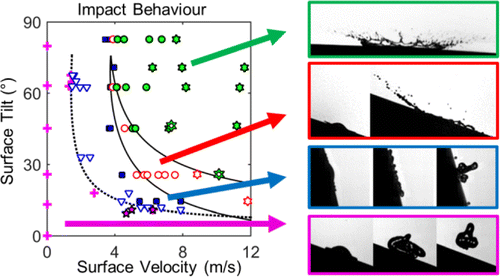 While that is thorough advice that you could relay to your coworker to help better equip his urinal temperament, it somehow didn’t seem like enough. After all, Mark, you came to me for a reason: Because I’m reliable. That’s why I asked a scientist — who admits that the design of some toilets makes the possibility of splashback inevitable — for his professional opinion on how best to urinate in a urinal without getting pee all over the floor.

“I have in the past considered writing a paper on the geometry of reducing splashback, collaborating with my father, a urologist who can organize clinical experiments to test my predictions,” says Alex Klotz, a scientist at MIT. “The vertical wall of a urinal presents a simpler geometry than the curved bowl of a toilet, which makes it a good simplified system to consider first.”

The essential problem, according to Klotz, is to direct the urine stream in such a way that it just flows down the wall after impact, instead of breaking up into a stream of droplets that fly back at the urinator. “Assuming that he isn’t actively modulating his bladder pressure, the main independent parameters are the initial angle of the stream and the distance to the urinal, which together with basic physics dictate the angle at which the stream hits the urinal wall,” he says.

But again, a little splashback is one thing: Leaving puddles of pee on the floor is quite another. So my advice, Mark? Try talking to your co-worker face-to-face. At the very least he’s likely to be amused by your passion for the perfect urinal pee stream.