The right jeans make a buttless man look like he’s packing serious backdoor heat. A beard will give a chinless man a lifetime of faux gravitas. Bras push boobs up to gravity-defying heights. And bald men sometimes wear hats to cover up thinning hair or total baldness. This is all part and parcel of the same sleight of hand everyone uses to put their goods (or lack thereof) in the best possible light.

So let’s get one thing clear: Either it’s all deceptive, or none of it is.

Take hatfishing. In a piece at The Cut examining the concept — which involves a bald or balding man wearing a hat so frequently that you never actually see his real hair situation—until you do, and he’s bald. Writer Jason Chen makes clear that doing so is some kind of dating bait-and-switch, it’s just a question of which one, and how serious the offense? That the term closely resembles catfishing — which is deliberate online deception wherein sad liars pretend to be younger, hotter or even an entirely different person to entrap a potential suitor — only underscores that the practice of hatfishing is tantamount to lying.

Chen interviews a hatfish victim, who tells him:

“I went out with a guy who wore a baseball cap on our first date,” says Jean, a 32-year-old writer. “We got a coffee, so it wasn’t a super-formal setting, but then I remembered that he was wearing a hat in one of his profile photos on Bumble, too. After we started dating, I realized that he wore his hats all the time to hide his bald spot.”

Though Jean’s date eventually ‘fessed up to the bald bold truth in an exchange she describes as mortifying, Chen goes on to note that the hatfish “may just be par for that smoke-and-mirrors first stage of dating,” like using an outdated selfie on social media or fudging your height on a dating profile. It’s clear from the unwittingly hatfished folks he interviews that daters find the reveal to be a major turnoff because it’s ultimately about presenting a false bill of goods.

“I do think you can unintentionally hatfish,” one hatfish victim named Deon tells Chen. “Because it’s not that he was looking to deceive me with his hat. I guess I just assumed that what was under the hat would be much more attractive.”

The underlying values expressed in these anecdotes are clear: We all want the real to resemble the depiction — fair enough. People feel they deserve to know a few things about the people they decide to meet for drinks or get down with, one of which is, apparently, whether they have a full head of hair. This reveals that being bald or balding is bad. But what’s even worse? Being ashamed of being bald or balding.

In other words, if you’re going to be bald, you have to be Vin Diesel about it or step to the back of the line and try again, Mt. Baldy. Lifehacker doubled down on this in a response to the hatfishing post called “Guys, Stop Hatfishing to Hide Your Bald Spot.” In it, Patrick Allan explains that doing so fools no one, even though it’s understandable that all of us want to put our best dome forward in a dating pic or on a first in-person meet up.

“If you can just land that first date you can win them over with your personality and other attractive qualities, right?” Allan writes. “I mean, it’s not really a lie so much as it’s hiding the truth, right? Right?!?”

He explains that it’s not the hiding the bald spot that’s so bad, but the way it comes off: “It makes you seem overly self-conscious, insecure, and timid, which isn’t a good look on anybody.”

Hidden in these prescriptions though, are a lot of gendered expectations that we tend to dole out unevenly. Women are totally allowed to enlist a veritable army of tools, enhancements, primps, perfumes, and tactics to present someone who is virtually unrecognizable from what they look like out of a shower or first thing in the morning. We grant women this pass. But men? Better not so much as try to hide that bald patch. We see you.

You’re going to tell me that this is totally okay: 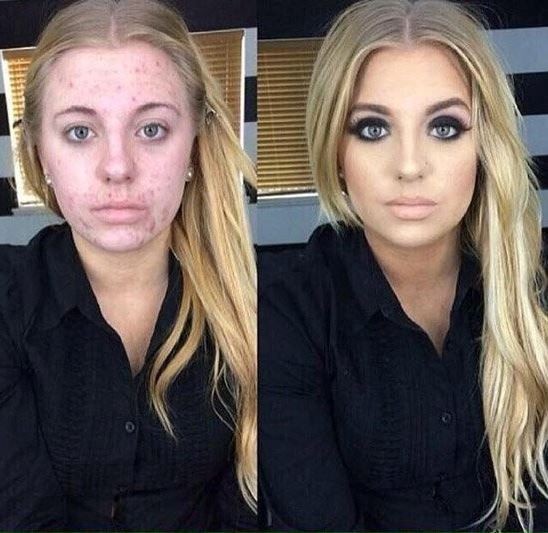 But this is a trick?

To be clear, the woman’s dramatic makeover IS okay: The college student in question was having an allergic reaction to benzoyl and looking for a makeup fix, and was mocked cruelly for it, too. And even if it is merely her preferred makeup style, what of it? The Kardashians have built an empire on contouring and dramatic makeup tricks that are widely becoming a standard of mainstream feminine beauty.

It’s all unfortunate, because not only is bald shaming real, but it remains an acceptable punchline for men in an era where we are finally moving away from telling women to correct their “imperfections” or learn to love them. It’s their choice; we should give everyone the latitude to feel as good or bad about their bodies as they wish. Imagine if this dating piece were written by a straight guy complaining about “boobfishing” — her boobs looked great in the dress, but once I got her naked, they were flat as pancakes.

Of course, it’s not exactly the same thing, and it would be disingenuous to suggest that a man finally taking a little heat for losing his hair is anywhere near what women endure, which is an avalanche of full-body-scanner-level scrutiny since birth signaling that they are never up to snuff no matter how many tricks they have in their handbag. But if we can find a one-to-one correlation, it’s that a hat is not that different from an incredible BB cream that hides years of acne scars. Dating is quite literally about taking the tedious, gently investigative time to sort out the “real” from the presentation, whether that’s a head of hair, a phenomenal bra, or someone who simply pretends to love Arcade Fire but can’t name a single album.

Eventually the jig is always up, anyway: You are going to see someone in the light of day, or at last call under fluorescent lights, and you’re going to have a make a choice one way or the other, gauging a combination of vibes based on chemistry and compatibility — and it’s your prerogative. But make no mistake: The person sitting across from you gets to do the same thing to you. In that case, hope you’re wearing your flaws directly on your sleeve.