Last year, Chili’s made an expensive decision. The restaurant chain set aside $750,00 a year to introduce an egg glaze to the top of its burger buns.

Their reasoning? A glazed bun is more Instagram-friendly than an unglazed one. And the more people want to Instagram your food, the more free advertising you’ll get.

“It just makes it look great. It glistens, it shines,” said Wyman Roberts, CEO of Brinker International, the parent company of Chili’s. 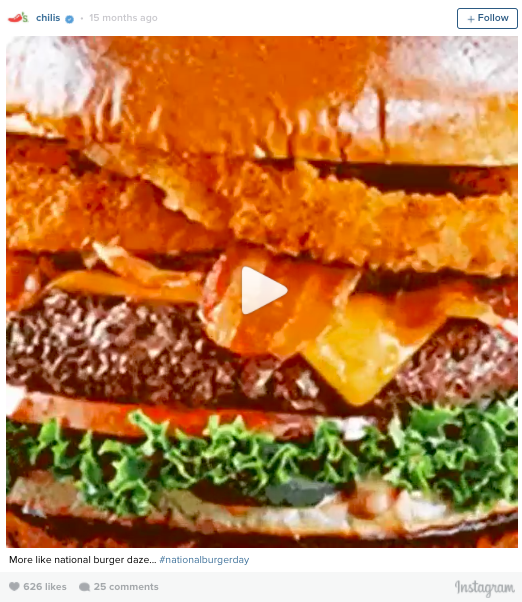 This is just one illustration of how, as companies compete for the most likes and followers, their quest for the perfect photograph has carried over into real life. Does social media success equal business success? Though there’s not much data connecting social media to sales, many businesses swear by it.

Instagram has already made certain urban landmarks famous — if only because all of a sudden they were Instagrammable, a difficult thing to describe. But you’ll know when when you see it (in your Instagram feed). Local and national publications have been publishing lists of the most Instagrammable places and foods in cities like New York, Austin, Chicago, and L.A. for years, calling attention to everything from fancifully tiled floors to “iconic signage.” As of September 2016, there were 27,695 Instagram photos using the hashtag #pinkwall, most referencing the famous Paul Smith wall in Los Angeles. Writes Dan Nosowitz at Atlas Obscura: “The fact that the wall is a simple swath of color, unbroken and very, very tall, makes it curiously like a professional backdrop itself.” 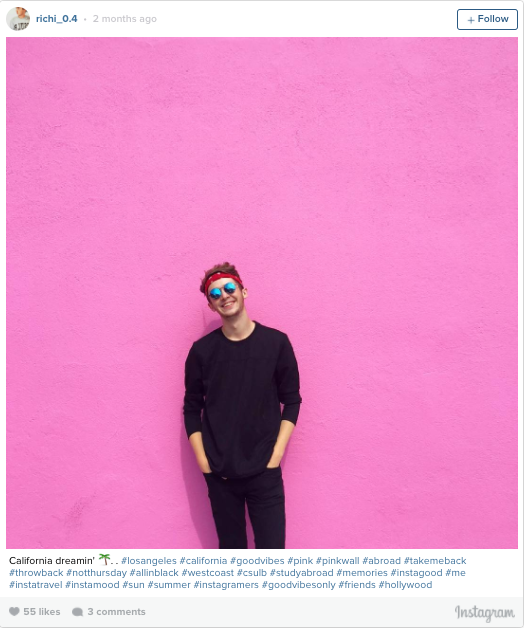 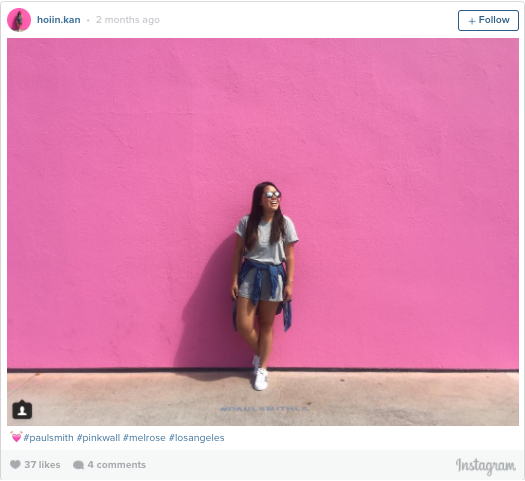 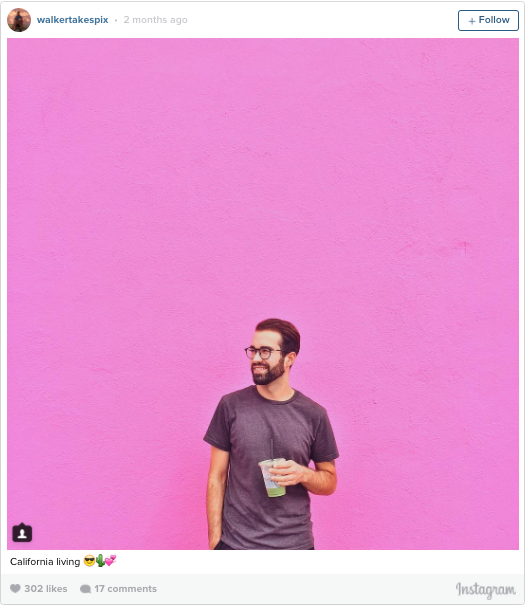 Although this started happening incidentally, businesses began researching how to rise in the Instagram ranks. Ice cream shops painted catchy phrases on their walls, including “ice cream therapy” and “less talk, more ice cream.” Several restaurants now sell eye-catching foods like red-bunned burgers and doughnuts topped with Oreos for the sole purpose of standing out on social media, and the food-glazing agent industry is set to hit $5.24 billion by 2024. You could argue that taste is irrelevant. 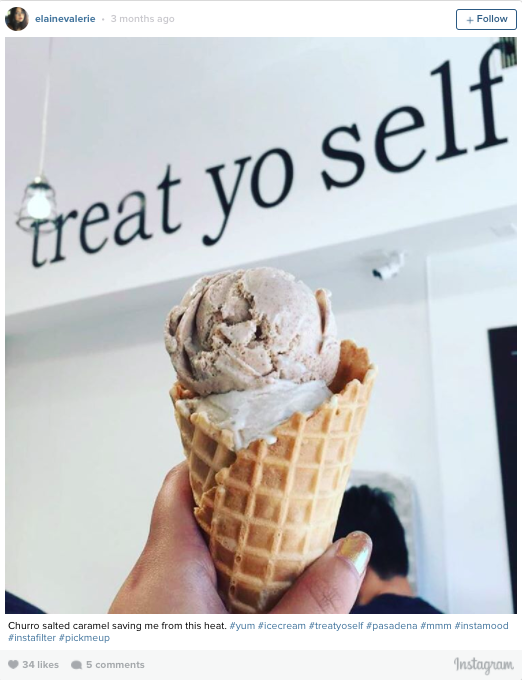 “Businesses should care about [how their customers talk about them on social media] because these actions are going to affect how people go through their eating experience or their stay at a hotel or a museum,” says Alix Barasch, assistant professor of marketing at New York University’s Stern School of Business.

People have always been visual creatures, and marketers have long exploited this with elegant logos and colorful ads, says digital marketing consultant Russell Allen. But now, given every place and item’s potential to be plastered all over the internet, businesses are designing their products and services themselves with marketing in mind. “Instagram has brought the reality of the effectiveness of using visual cues to the forefront of several industries,” Alley says.

Lots of businesses were able to attest to this. Chomp Eatery, home of L.A.’s famous rainbow grilled cheese, started altering its menu to optimize shareability after they noticed their fried chicken doughnut burger and ube burger take off on social media. “We are constantly thinking of new menu items that people will be inspired by — hence the rainbow grilled cheese,” says Chomp’s publicist, Nicole Lynn. “This menu item came out around Pride, so we were able to cross-promote with the events that were going on around that time.” 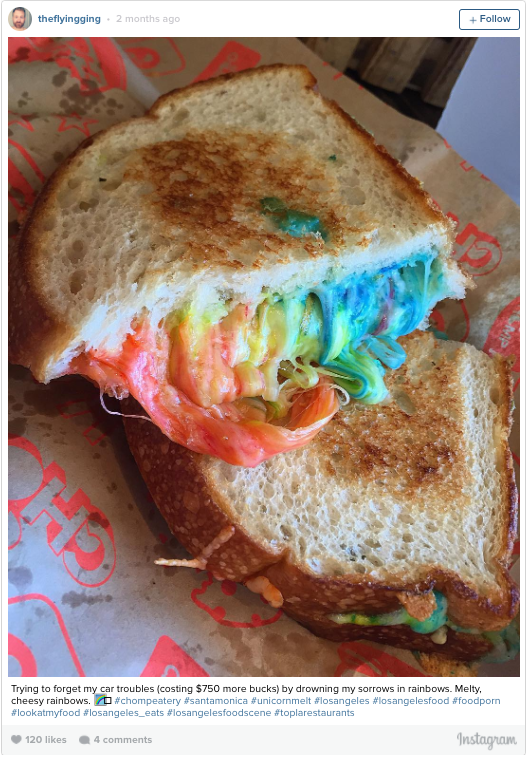 The PR and marketing agency Herald Strategies actually helps arrange food for its client Sixty5 on Main, a restaurant in Nyack, NY, before it’s served to customers, according to its founder and CEO Warren H. Cohn. To make sure these dishes get lots of eyeballs on them, Herald Strategies will put inserts in checkbooks encouraging sharing, outright ask customers to take pictures, and private message popular Instagram accounts inviting them to the restaurant with the hope that they’ll take and share photos.

Cookie Bouquets, which delivers colorful arrangements made of cookies, created its own “cookie studio” just to photograph the treats before distributing them, owner Christian McCoy says.

Some are struggling to please customers who expect food that’s not only delicious but also visually pleasing. Francis Turner, owner of Coco Bean Down Under, says she’s had to find creative ways to present her brownies and protein balls because they just “don’t tolerate gussying up for photos.”

“In person, customers can smell the chocolate or try a sample and they’re hooked, but unless the photography of an ugly food product is just so, nobody’s going to click ‘like’ on a photo of a dark brown brick of goo,” she says. “The more focus there is on presentation and photo staging, the higher the expectations of the consumer.”

To compensate for these baked goods’ lack of Instagrammability, Turner takes pictures of individual ingredients during the baking process. She also writes fun sayings about coffee on the chalkboard of a cafe she supplies so that she gets business from their Instagram. 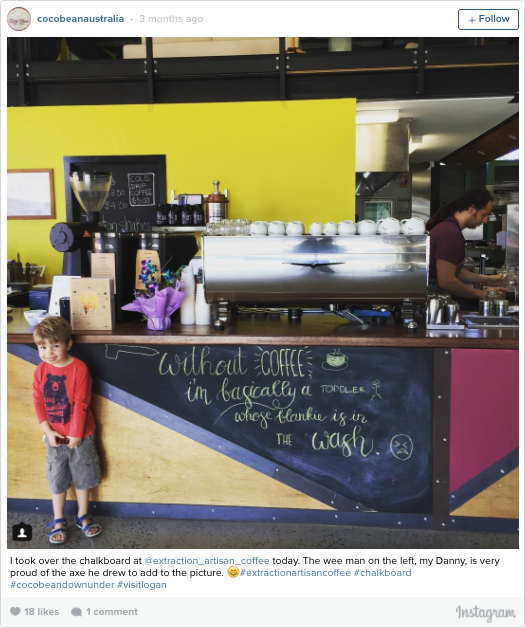 As Instagram increasingly drives purchasing decisions, it’s not just food that’s had to step up to the, um, plate. Other industries like consumer goods, hospitality and fashion have also altered their real-life products and stores to gain attention from Internet users.

Plato’s Closet, which buys and resells used clothing, has a separate clothing rack for clothes they’ve shared on Instagram. The items go up on the rack the moment the posts are shared, and people can reserve them by commenting, says Terry Doerr, who does marketing for the company’s London, Ontario, franchise.

Companies without physical storefronts have had to get really creative. The Cat Ball, which sells cat beds and furniture, built a life-sized cardboard cutout of its most-used cat model to bring to events for photo opps. When “#flatcat” got stolen at CatConLA in June, they created the hashtags #FlatRetro and #FlatRetroAmberAlert to try to find it while simultaneously driving Instagram engagement. “I now collect photos of photographers taking photos of the stupid cardboard cat,” says the company’s designer and COO, Jennifer Boaro.

Not even the tech giants are immune. Instagrammability has become a recruiting tool as well as a marketing one, with some companies making their offices Instagram-friendly to attract talent, said marketing specialist Rebecca Stickler. Google’s Instagram, for example, showcases everything from its office dogs to its rainbow-striped walls. 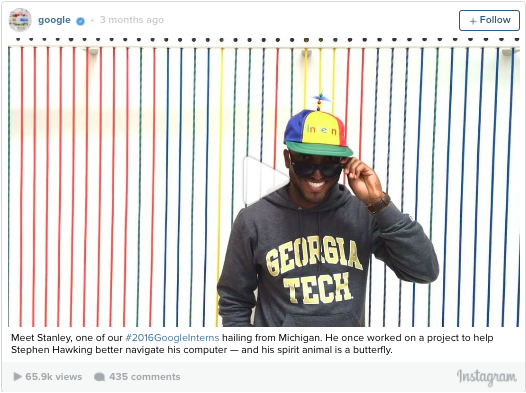 But even as everyone’s hopping on the Instagram bandwagon, there could be a downside to the craze, Barasch says. According to her research, customers enjoy experiences less when they share them on social media — and they’re less likely to recommend establishments or visit them again when they don’t enjoy their time there.

Barasch thinks social sharing could hinder enjoyment because people get caught up in how they look when they’re planning to broadcast their meals or vacations to their friends, which can make them less present.

That doesn’t mean companies should forgo all the publicity they gain from being Instagrammable. But Barasch recommends they avoid explicit directions to take pictures and share them, or if they must, give those instructions through signs on the way out so people enjoy their experiences before they start thinking about what they look like.

“Awareness is going to be positive [for businesses], but there could be other unintended consequences,” she says. “I just suggest that they also think about the downsides that come when you know you’re at the top of the ski slope and you’re thinking about how to get that photo.”

In the age of social media, the line between our digital lives and real lives is getting thinner. That means the internet can affect not only businesses’ digital marketing strategies but also how they operate in real life.

If marketing was ever an activity separate from the creation and design of products and services, it no longer is. Business owners are already marketing their snacks, drinks, clothes, restaurants, stores, hotels and offices as they decide what they’ll look like. And the most Instagram-famous companies seem to be the ones that seamlessly blend the virtual and real words — without their customers ever even noticing the difference.