Last year, more than 300,000 people went into sudden cardiac arrest, during which their heart stops and doesn’t start again without CPR or medical treatment. That is, they died — if just for a few minutes. The survival rate — or, revival rate — is bleak: According to the American Heart Association, only 12 percent of all those who experience sudden cardiac arrest come back. For the few who do — such as the three men below — their (new) lives are forever changed.

Dave Olson, 53, Edgewood, Washington
I normally travel alone for business, covering several states for my job as a medical device rep. About four months ago, though, I asked my wife to join me on a trip, figuring it would be a nice getaway weekend. That decision ended up saving my life. Because at 3 a.m., I sat up in bed, made some terribly labored breathing sounds and suddenly passed out, with no pulse.

My wife called the front desk and asked them to call 911. She then spent the next five minutes performing CPR on me on our hotel room floor. The paramedics worked on me for another 10 minutes before getting a pulse and transporting me to the hospital. In those first two hours, my heart stopped four or five more times. Whenever it did, someone jumped up on the gurney and resumed CPR.

I was in a medically induced coma for the next three days. I don’t remember anything about what preceded it; in fact, the last thing I remember is meeting a friend for coffee that morning, a full 18 hours before the event. When I finally came off the ventilator, it was the second-worst day in my wife’s life. I was talking weird and acting like I had brain damage. I kept asking if I could walk over to the local Burgermaster. I was also having all sorts of vivid dreams. One of them involved going out for a late dinner with my fellow patients and Seahawks quarterback Russell Wilson and his wife, Ciara. 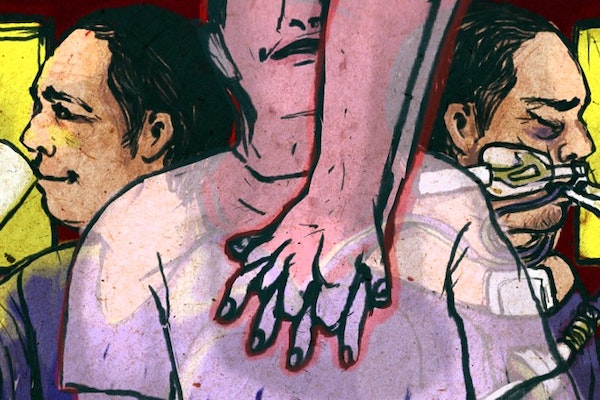 When I was transferred to my hometown hospital for four days of rehab, a staffer jokingly told me, “You realize you’re a freaking miracle, right? When we looked at your paperwork on what you’d been through — your heart stopping five or six times, being shocked eight times, all the CPR you had — we expected someone in far worse shape.”

I’ve never been one to stress too much about life and death. At 53, I have so much to be thankful for in the life I’ve already led. If the good Lord were to take me tomorrow, like he almost did, I’d have no reason to complain. I’ve been happily married for 26 years. We have four beautiful daughters. I have lots of stamps in my passport. The Seahawks won the Super Bowl a couple of years ago.

So it’s been harder on my wife. In the first few weeks afterward, she had a lot of anxiety if I didn’t quickly answer my phone or reply to a text. She sleeps through the night now, but the slightest noises still startle her. For example, if I cough or sneeze in my sleep, she starts thinking the worst. Certain comments from various people during my sudden cardiac arrest event haunt her, too. There was one sheriff’s deputy, for instance, who politely escorted her out of the room while the medics worked on me. When she asked where they would take me, he told her, “Let’s just wait, because if they don’t get a pulse, they won’t transport.” Meaning if they don’t get a pulse, they’ll just call the coroner. Another sheriff’s deputy later told me that in his 26 years of being a police officer, I was the only person he’d performed CPR on who’d survived.

When I run into friends or acquaintances, I always get the biggest, longest hugs. They all ask how I’m feeling. When I respond with a big smile and say, “I feel great — 100 percent back to normal,” they get emotional. They may have read on Facebook that I’ve recovered, but until they see it with their own eyes, it doesn’t fully sink in. They also all usually tell me the same thing: “I’m not sure why, but I prayed for you more than anyone I can ever remember.” Or: “I’m not normally a prayerful person, but I prayed for you a lot.”

I’m still on a six-month driving restriction. When that’s up, I’ll resume driving. I realize that may not make sense to some people because if I pass out while driving, I could hurt others. But I believe in being reasonable by not doing things I don’t need to do — e.g., climbing a 20-feet ladder to hang Christmas lights and falling to my death if my heart stops again — and taking minor risks so that I’m still living my life — e.g., hiking Mount Rainier National Park.

I just won’t be hiking by myself anymore.

Dan Purcell, 34, Seattle
From what I could later piece together — I don’t remember anything until the hospital — the morning before my heart stopped, I drove out to a running spot I’d been to hundreds of times. I made it around the three-mile loop and drove home. Somewhere along the way, according to my doctors, my heart began to race at around 220 beats per minute. I passed out, but miraculously my foot came off the accelerator. My truck idled through an intersection, and a 75-year-old retired nurse saw me crash and came to my aid. She was able to get me out of my truck and began CPR on my sweaty corpse. I was without a pulse for a few minutes, but she kept me circulating until the fire department arrived, shocked me with a defibrillator and got my pulse back.

I’ve never understood why it happened. The doctors provided a few theories — scarring in my heart or possibly even extreme dehydration — but ultimately, the cause remains unknown. I’ve theorized about God’s reasoning for having me experience something like that, but I don’t have any answers either.

On the one hand, I try not to take life as seriously now. But on the other, I’ve developed some occasionally severe anxiety. It seems to come at random times. I’ve had breakdowns at my job as a financial adviser, or even while sitting at a cafe. The breakdowns are classic panic attacks: racing heart, blurry vision, thoughts of death, sweating and difficulty breathing. Flying or being in situations where I know aid is far away have become particularly unbearable. And with any skipped heartbeat or unexpected chest ache, my mind kicks into overdrive and panic follows.

I’m doubly scared about having another incident in front of a loved one or family member and having someone I care about see me die.

Not surprisingly then, health is always at the forefront of my mind. I try to eat better every day, cutting back on sugar and replacing it with greens. Doing so feels rewarding, like I’m gaining additional life. I don’t, however, run as much as before. And when I do, it’s at a very slow pace and full of dreadful thoughts. Before the event, I had no fear that my health was going to be an issue in the near future. I felt like it was the one thing I had control of in my life. Now? Not so much.

Even though I can’t remember the moment my heart stopped, I haven’t spent too much time wondering about it: where I went, or what I saw. Would I like to know that stuff? Sure. I think it may even come back to me one day, but for now, I’m just happy to be here.

Jeff Martin, 50, San Diego
In mid-March, I was out for a group trail run north of San Diego when I collapsed. I have no memory of the next 36 hours, or even the event itself — the last thing I remember was pulling away from the house and sipping on my coffee in the car.

When I woke up in the hospital and the fog of the propofol lifted, I felt like I’d been beat up. Nothing acute, just wiped out and sore all over. My chest really hurt from the compressions. I would ask my wife, “What the fuck happened?” and she would tell me the whole story. She tells me I would reply with one of two things — “No shit?” or “That doesn’t sound good.” A few minutes would pass, and I’d ask her again, “What the fuck happened?”

I’m good friends with five of the 13 people who were on that run. I didn’t know the others at all, including Travis, the off-duty paramedic who gave me CPR for 12 minutes until the EMTs arrived. When I initially collapsed, the runners nearest to me thought I was having a seizure. Travis, however, didn’t think it looked like a seizure and reached down to discover I had no pulse. That’s when he realized he had to do CPR right away and jumped into action. The friends I’ve talked to were all freaked out about seeing it go down on the trail like that. They’ve told me, “Watching you convulse when the EMTs shocked you was just like how it happens on TV, and everybody was very nervous when they had to shock you the second time.” 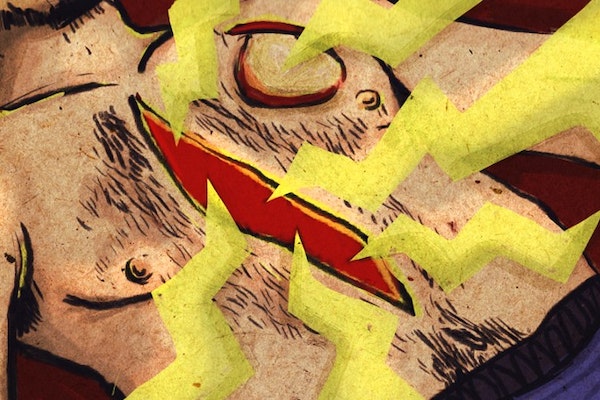 About a week after the event, my wife and I arranged to meet Travis and his wife for dinner. He asked how I was feeling, and I told him, “I feel great, but my chest is really sore from your compressions.” He said, “Oh my God, I’m so sorry!” I told him it wasn’t a problem, the soreness was worth it. It turns out good CPR usually breaks ribs. I had no broken ribs, which was initially of concern to my wife and the doctors — they thought Travis’s CPR wasn’t sufficient. It turned out, though, Travis knew exactly how much compression was necessary and only broke cartilage.

Before my sudden cardiac arrest, I’d completed a number of ultramarathons. So as soon as the doctors cleared me to run again about three months after I collapsed on the trail run, I signed up for the Noble Canyon 50K, a race I’d done five times before. At the starting line, I was feeling so many things — nervousness, excitement, fear. A mountain 50K isn’t that easy, and there are always moments when you feel a low spot and wonder why you do these things. This race was no different, but I embraced it. I was keenly aware of cherishing every sight, smell and stride. My race strategy was just to finish, so I wasn’t pushing it at all, just enjoying every step.

That’s what I would say this whole thing has done for me — given me gratitude for all the things around me. And I’m definitely more at peace. We all get our heads down in the day-to-day routine. I try hard to catch myself when I notice it happening. I’m not particularly religious. So I don’t like to say, “Each day is a gift,” since it implies it’s a gift from a higher power. I prefer to tell people to “cherish each day.”

I know it’s a cliché, but tomorrow isn’t guaranteed. I know that firsthand.

— As told to Adam Elder