Thirty-seven-year-old Boston-based bartender Trevor Christian has been slinging drinks for nearly 10 years — and been sober for eight of them.

Don’t get me wrong: I love alcohol. It still plays a large role in my life, just not in my body. I don’t feel like I’m better than anyone else, or like I’ve figured it all out. I just can’t partake anymore. For good reason, too.


When I got evicted from my apartment in the mid-2000s, my kitchen was nothing but empty beer bottles, cigarette butts and broken glass. I was managing to blow enough of my salary on booze and drugs that I never made rent on time, even with the money I was stealing from work by faking cash returns and dipping into the safe.

Then things got really bad.

I moved into a house with five other people to cut down on living costs. I now had so much extra money that all I did was party. I stopped caring about work completely. And when I got fired, I did what any smart, reasonable person would do: I cashed in my 401k and went f***ing nuts. Like a rock star, I only slept when I blacked out. And the corners of my jackets and sweatshirts were torn from being so drunk that I couldn’t stand up; instead, I would push myself home against the side of a building. A lot of times, I would wake up in a park — sometimes soaking wet from the sprinklers that had been spraying me with water for God knows how long. Speaking of God, one morning, I even woke up on the stairs of a church.

Needless to say, I wasn’t happy. I’d blown through all my money, and my health was bad. In the morning, I couldn’t light up a cigarette until I chugged a beer because my hands were shaking so violently. I’d lost close to 50 pounds, the three things I consumed with any regularity being bananas, trail mix and booze. And my sweat was bright orange.

I admitted defeat on the phone with my dad. He said, “Just get to the airport. We’ll get you a ticket home.” I returned to Vermont a statistic: 30 years old, living in my parents’ basement, tail between my legs, no job, no car, no anything.

But I didn’t really change. I would say, “I’m just gonna have a six-pack.” Or: “I’m only gonna drink on the weekends.” Naturally, rock bottom soon followed. I don’t remember most of it — just being shaken awake by a total stranger in the front seat of a car that wasn’t mine but that I had driven into a telephone pole.

As conditions of the DUI that followed, I had to stop drinking. So I started going to meetings and hanging out with other recovering drunks in church basements. It sucked for the first couple of months. It was like ending a 10-year relationship with someone I saw every night until the wee hours. I wasn’t completely accepting of this lifestyle change, but it was either do AA, go to prison or die.

I got a job doing design, but after a few months, my brother, who’d been sober for about a year at that point, asked if I wanted to do some bar-backing at the place he managed. I’d told him I was interested once before; back then, though, he was like, “You need more time.” Now, he was comfortable with it — as was I.

My sponsor thought I was out of my mind. But he didn’t stop me. “I don’t approve of it, but I’m not going to hold you back,” he told me. 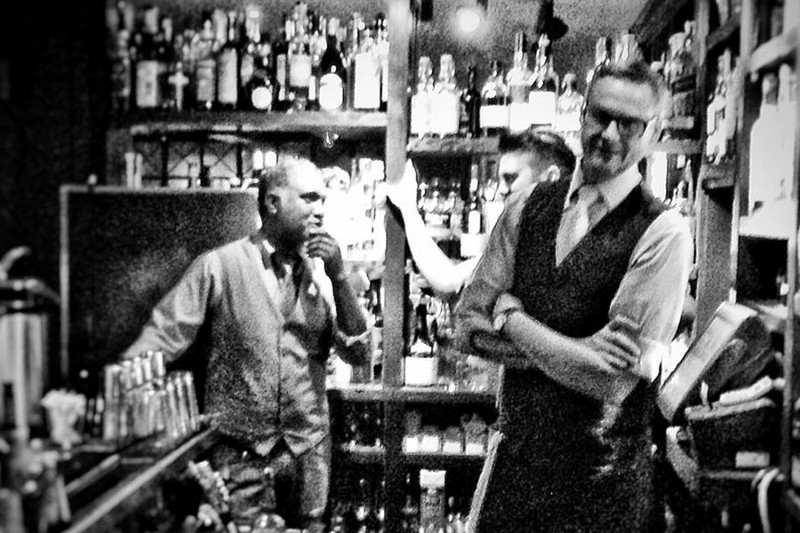 I was lucky that I was bar-backing and not bartending at first. That meant I wasn’t in immediate contact with alcohol. That smell, though! Whoa! It brought back some warm memories, and some pretty awful ones, too. But even with alcohol right under my nose, I could handle it.

I also was lucky that my brother and another bartender I worked with were sober. Their support was crucial to me getting comfortable being sober in an environment that preaches anything but sobriety — as well as getting comfortable in my own skin. I mean, I’m still a crazy asshole. That’s never gonna change. But now, that craziness isn’t totally out of control and capable of killing me.

So how do I work around alcohol all the time?

Well, I definitely have some handicaps. For instance, I don’t taste things. I probably could, but once it’s in my mouth, all bets are off. And I’d rather not flirt with that kind of temptation. Instead, I sniff everything — the tin, the jigger and anything else that helps me make a good drink. The similarity between taste and smell is staggering. Obviously there are some things that taste differently than they smell, but you can pick up a lot from smell.

Nor do I talk about my sobriety much at work. The people I’m close to or have worked with me the longest know, but that’s about it. Same on the guest side of things. To be honest, that’s probably the biggest rickety bridge. Part of my job is to have the guest’s trust when it comes to recommending things or having the competence to make them a cocktail they’re going to enjoy. I never lie to them. If someone asks if I drink, I tell them the truth. But I never say “I don’t drink” when someone asks me about a spirit or a beer. I tell them everything I know about it from what I’ve read and what my coworkers have told me.

Besides, being a bartender is about way more than making drinks: It’s about making the people at your bar feel special. I want them to feel comfortable; I want them to have an enjoyable time; and I don’t want them to be bothered about drinking in front of me. That’s too common of a response when my sobriety comes up. People seem to automatically feel that because I don’t drink, they shouldn’t drink around me. Or that they’re doing something wrong. But that’s not it at all. I’m always like, “Please! Have a drink! I can’t, but you should!”

To that end, I wasn’t always sure I’d stick with not drinking. Part of it was curiosity: How long can I keep this up for? Then the days turned into months and the months turned into years. Before I knew it, life was pretty awesome without it. I mean, I miss it, but I don’t need it.

Best yet, as strange as it sounds, I’ve found my calling behind the bar. In fact, I can’t see myself doing anything else.

—As told to Haley Hamilton