When you grow up poor, it doesn’t take long before you realize that there are people in the world who have more than you (thanks, television!), but they mostly seem distant, almost unreal. When you grow up comfortable, you may never comprehend that there are people who have appreciably less, or what that means. Either way, in a nation where we’re increasingly economically segregated, it’s hard to have a real feeling for how the other half lives—whichever half that is.

As a kid, I had an unusual window into the class system because I saw two sides of it every week. At my dad’s house, in a nice apartment in a nice Brooklyn neighborhood, I was without wants. That’s not to say I got whatever I asked for, but being short on food, having the electricity shut off or scrounging for cash to buy art supplies for a school project? Those worries didn’t exist. At my mom’s house, less than an hour away by subway but in a very different Brooklyn, those concerns were ever-present — not just in our apartment but in the apartments of all my friends in the building and on the block. So I knew early—not in an articulable way, but as one knows gravity or air—that people in different places live differently.

Neither of my parents explained any of this to me, and it would be a long while before I could tell you that I had been moving between social classes. Instead, I had an unquestioning acceptance of inhabiting different worlds. Time at my dad’s apartment felt easier, steadier: Nintendo, Legos, a friend’s bar mitzvah party. At my mom’s things were more chaotic but warmer, forever bursting with trash-picked treasures and art projects at the kitchen table using scavenged materials. A weekend there might involve drawing on old newspapers with ancient quill pens dipped in ink, collages made with shell fragments gathered at a Coney Island beach or a game of tag with kids from the block, played across six stories of fire escapes and rooftops. Everything was different, but everything was normal, too.

And so I grew up in between, and ended up embarking on an adult life that reflected that. I went to a good college, but on almost a full scholarship, and I quickly abandoned the dorms for a shared apartment in a distant working-class neighborhood — the kind of place where you could rip down the panel walls and restore the original plaster (or not) as long as the rent was paid on time. I stayed there after graduation, teaching and waiting tables and paying off loans, and thought that would be my life: a cozy, ramshackle apartment full of scavenged furnishings and musical instruments and backyard barbecues with alternating reggae and salsa as the Jamaican next-door neighbors and the Puerto Rican upstairs neighbors vied for control of the stereo.

But then I met a woman, and she didn’t think so highly of my mild boheme. In fairness to her, the hot water was spotty and you had to go out into the building’s common hallway and back in another door to get to the bathroom. In hindsight, it was nothing short of a miracle that she tolerated my apartment long enough for us to move in together. But she did, and after a while we moved to another place together; then we got married and moved to another city, where we started a family. Unfortunately, we did so at the peak of the housing bubble, with two small children, and in a way that was, altogether, just one monthly credit card payment beyond what our means would allow.

Then I got laid off from the public defender’s office in a state budget crisis and embarked on a financially disastrous year of solo law practice. Debts began to weigh more heavily and simmering domestic discontents boiled over. Her attachment to our suburban house and mine to public-interest work were two reasonable, yet incompatible convictions. Differences of life philosophy that had been almost imperceptible when we were 23 seemed insurmountable at 33.

And so I found myself frantically scrubbing, painting, spackling and purging entrenched wasp colonies in a long-empty apartment in a very poor neighborhood in a very poor city, trying to make it a place where my sons, then 5 and 7, could spend half their time. For all of the earnest hand-wringing I had done when we lived in an upper-middle-class suburb about whether my kids would learn empathy, compassion and street smarts, I was now feeling something more like shame. I considered the two worlds my boys would inhabit: with their mom, in the comfortable three-bedroom suburban house they’d always known, enjoying the security of family wealth and vacation homes; and with me, in a decrepit tenement with a crumbling plaster ceiling and cracked windows through which we could watch drug deals. How would I make something so different feel normal?

In the end, I did what my mom had done, and made the apartment a haven of art and found things. We discovered that the dumpster behind a nearby Michael’s craft store was a never-ending, unpredictable font of art supplies — trips there became a weekly highlight. We used paint markers and googly eyes from the clearance aisle of the same store to cover our bathroom walls with goofy octopuses. And I started a tradition I hoped would make my house feel special: Every day that my sons were with me, I would send them to school with a hand-illustrated lunch bag — a little bit of fun and whimsy to remind them I loved them and remind me that things would be okay.

Things did end up okay. I eventually got re-hired to a state job and started the long, slow process (still very much ongoing) of digging myself out of debt. I stayed in the neighborhood, but ultimately moved to a nicer apartment — with a nice woman I met after getting divorced. I’m more financially secure now than I was when I got divorced, and more than my mother ever was, but my neighborhood is still a world apart from where my boys spend the other half of each week. Hopefully, living here will help them understand more intimately what poverty really is and what it means to have the good fortune to grow up middle class. In the mean time, I’ll keep making daily lunch bag illustrations to remind them — and me — that everything is normal.

These are a few of my favorites: 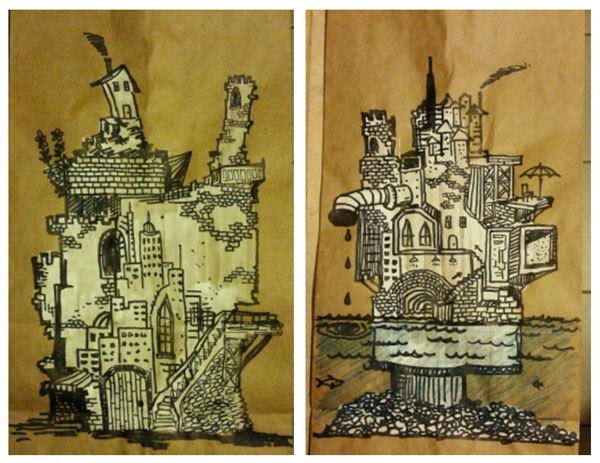 The goal has always been to send the boys to school every day with something wondrous or whimsical, or, at least, beautiful. These jumbled city-houses started as random shapes scribbled with a white marker, but were inspired by the dream houses my kids used to design for themselves when they were smaller. They would start as ordinary house shapes (box with a peaked roof and a chimney), then grow and morph, requiring taped-on pages as the ambitious architects added swimming pools, video game arcades, bowling alleys, garages for their hovercrafts, and so on. 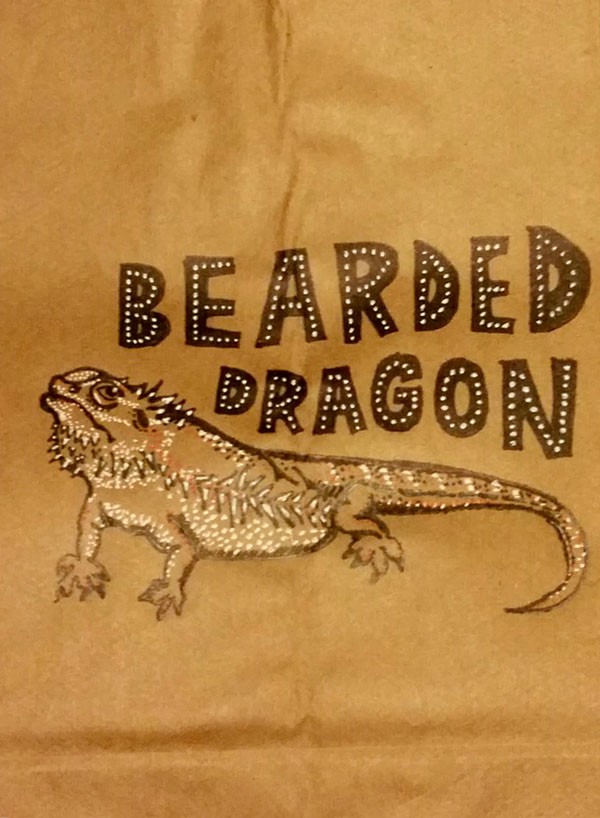 From time to time, the boys make requests, which fatherly pride obliges me to fulfill. This one is a portrait of a lizard that lives at my younger son’s school. 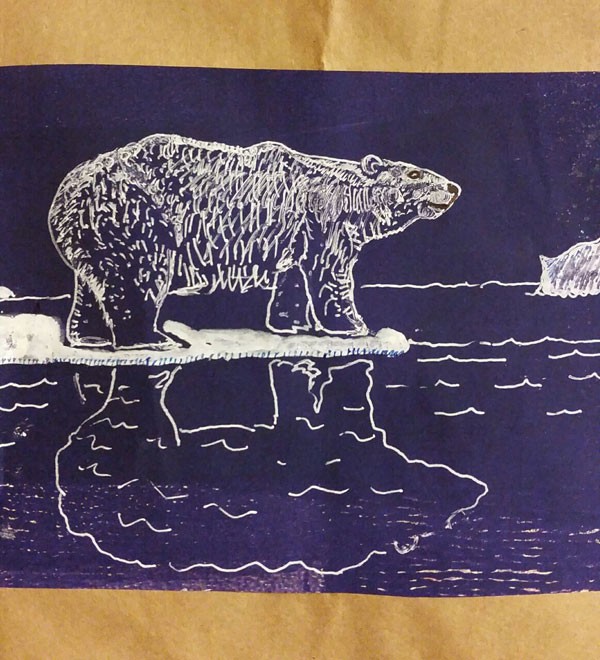 I try to use scraps and recycled materials whenever I can — partly because the boys frequently watch me work after dinner and it’s a good lesson (reduce, reuse recycle!), but mostly because I run out of ideas sometimes. This scrap of paper, painted purple-blue, was left over from another project and just demanded a polar bear. 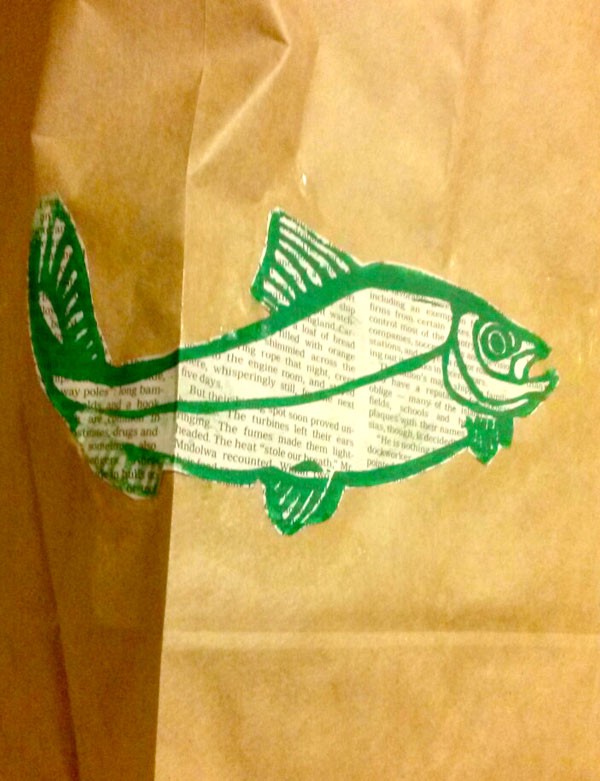 This salmon print came after the boys returned from a two-week Alaskan cruise with their mom’s mom. 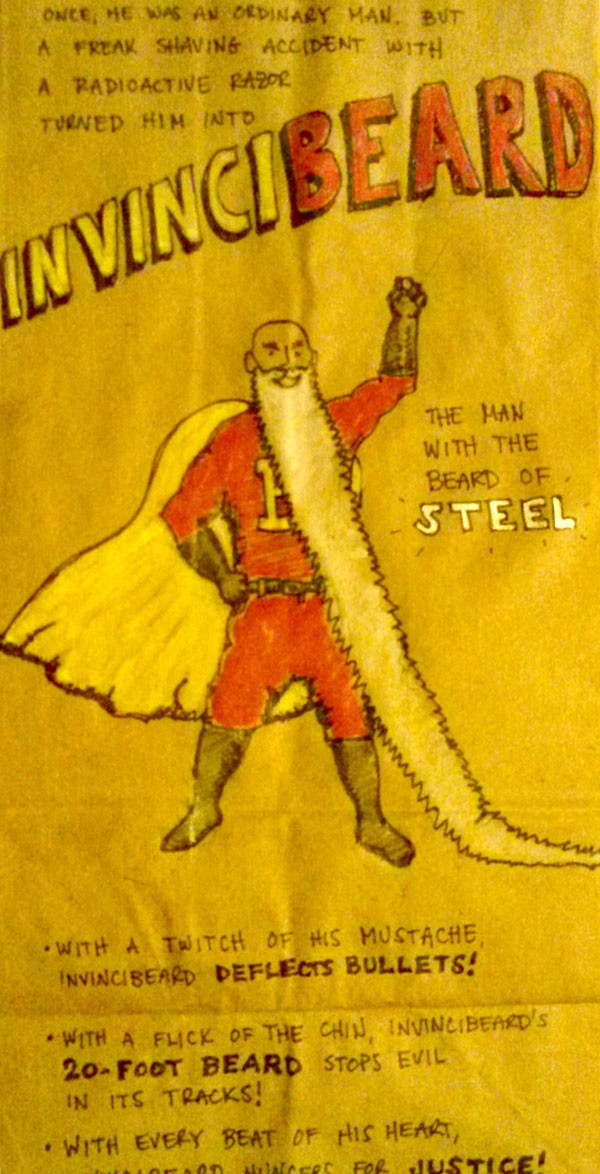 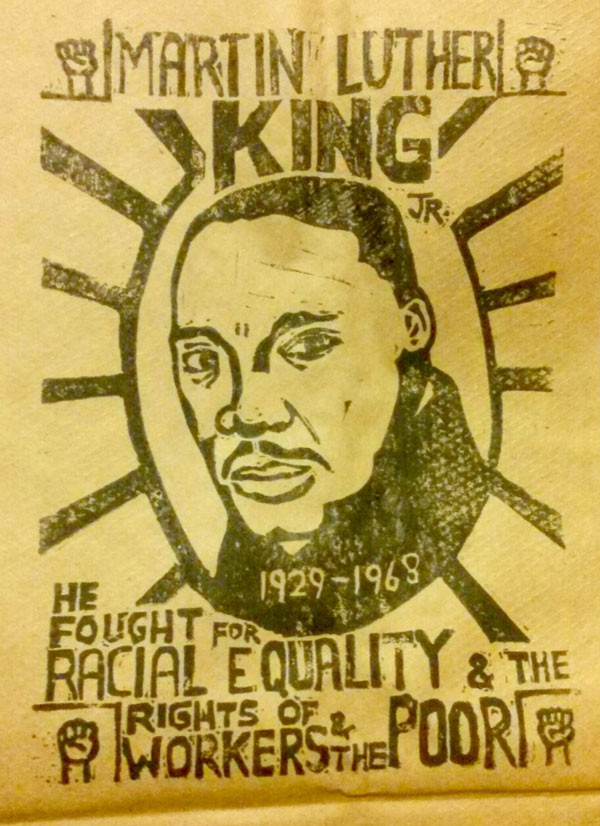 Sometimes I do illustrations that are relevant to the date when the bags get used. This is probably my favorite of all of them. 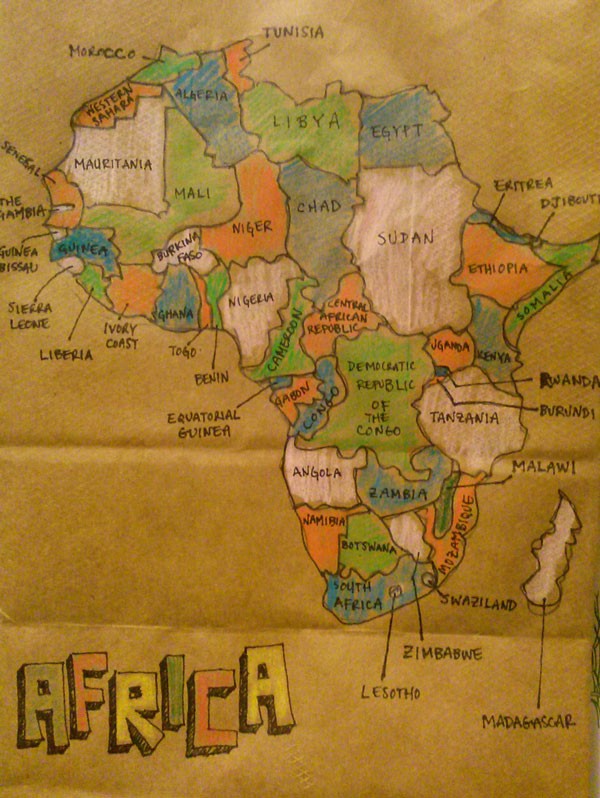 Another time, one of the kids had a curriculum section on Africa. I have noticed that Americans have a nasty habit of forgetting that it’s not a homogenous place but a vast array of different nations and cultures, so I made this map. It was way too much work and almost certainly didn’t convey the message I wanted it to. But I love maps. 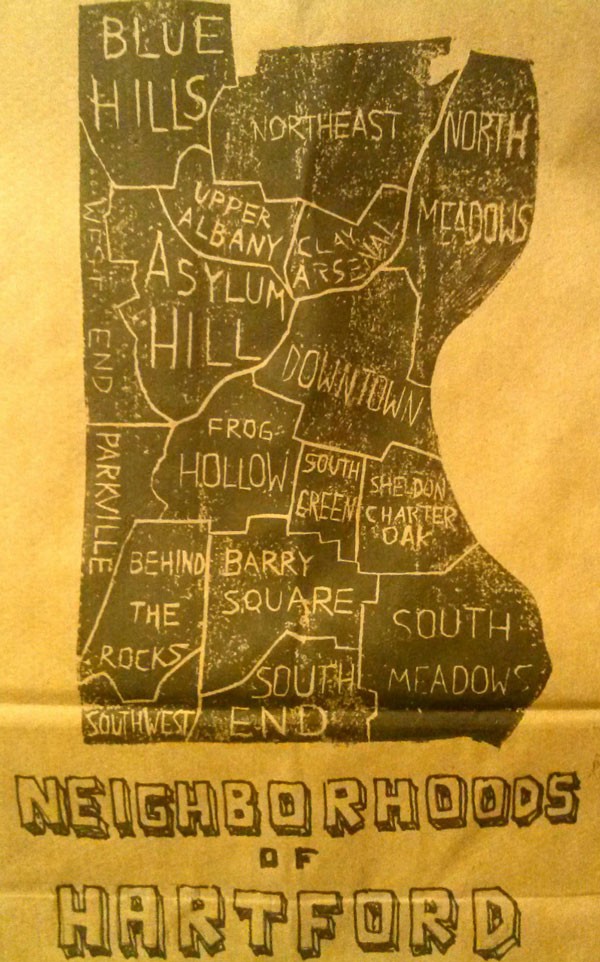 Did I mention that I love maps? This print was also part of my ongoing project to get my sons engaged with the city where they spend half their time (their mom lives in a neighboring suburb). 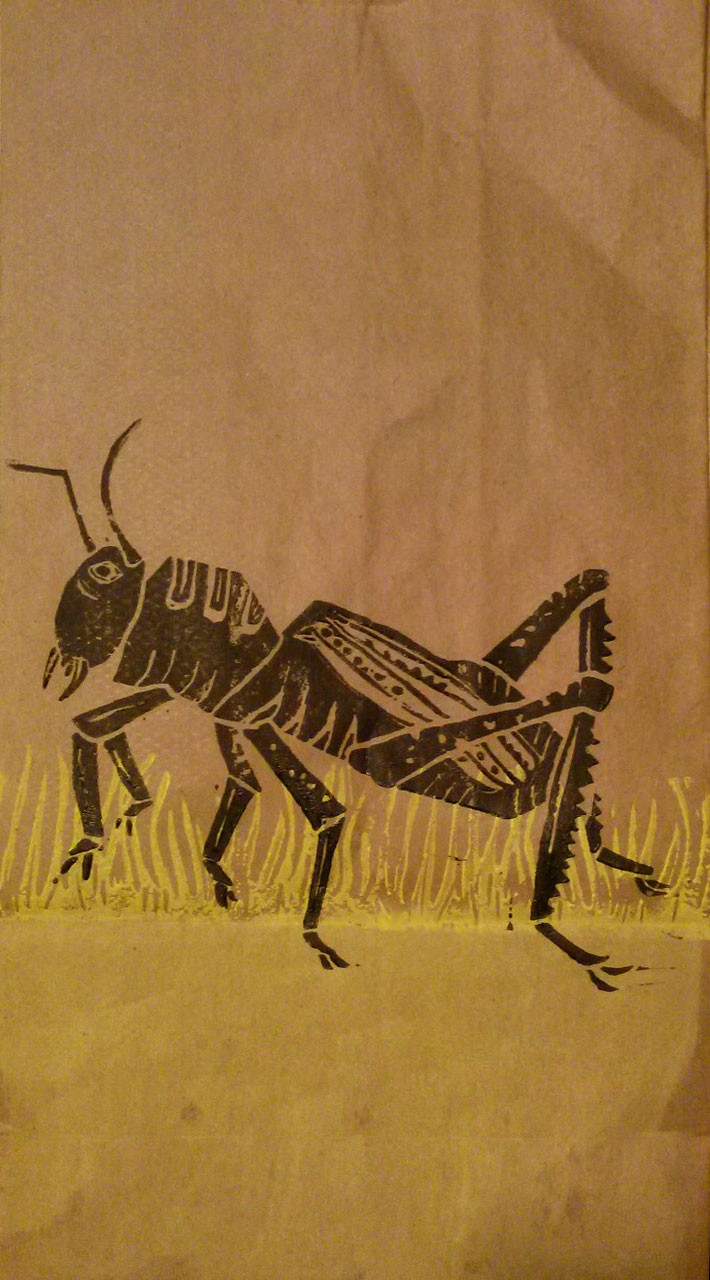 On a Father’s Day walk, the boys caught grasshoppers. The younger one got home and drew a grasshopper from memory, which I made into this print. 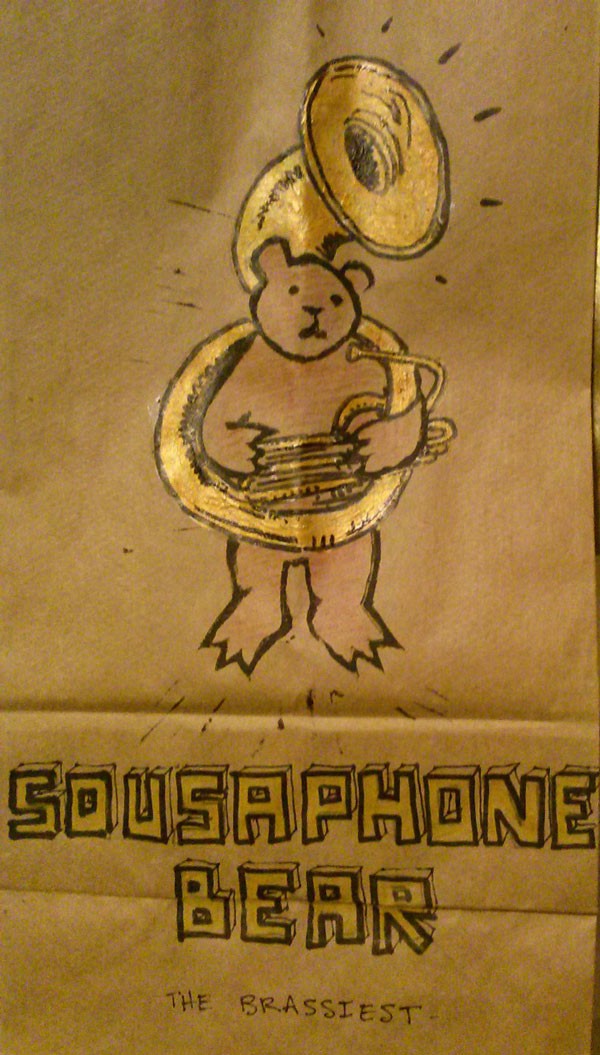 I started making block prints because I thought it might be a faster way to do two identical lunch bags. That ended up being wishful thinking, because printmaking is too labor-intensive. The only time when the technique was actually more efficient than drawing was when I made this bear. He has proved immensely versatile… 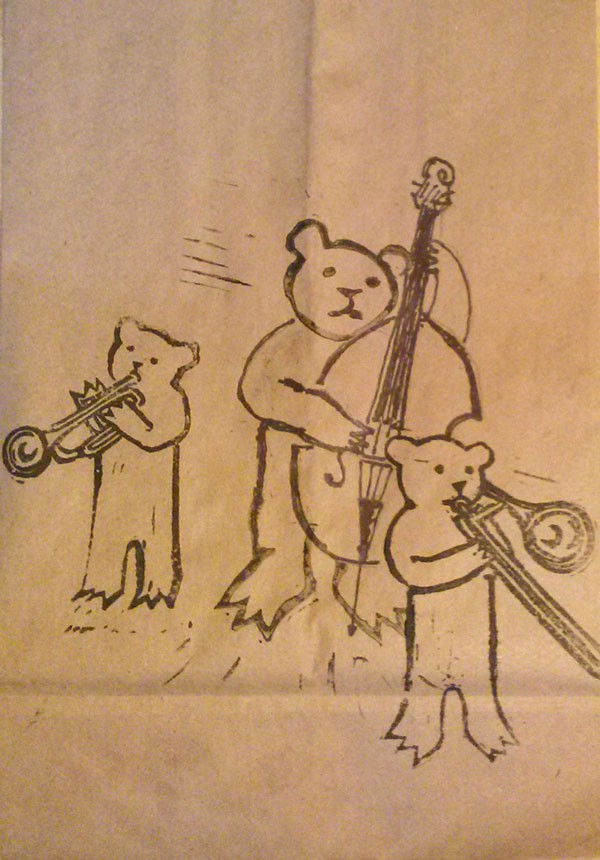 Here he is as me, because I play the bass. The smaller bears are my kids, one of whom plays the trumpet and the other of whom is about to start learning trombone.

Here he is as me again, but at work this time. This was part of a ten-day Bill of Rights series I did for my older son when his class was studying the Constitution. 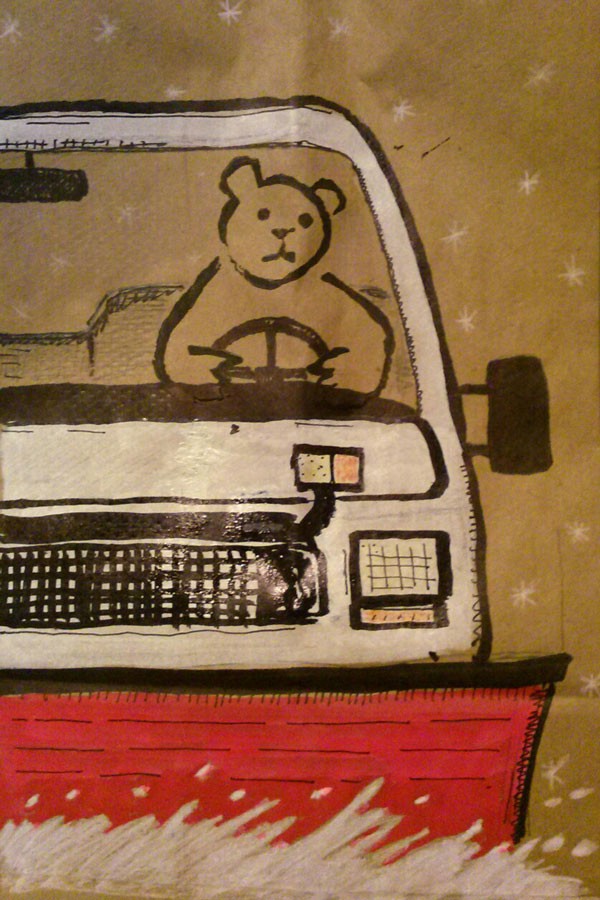 Here he is driving a snowplow. 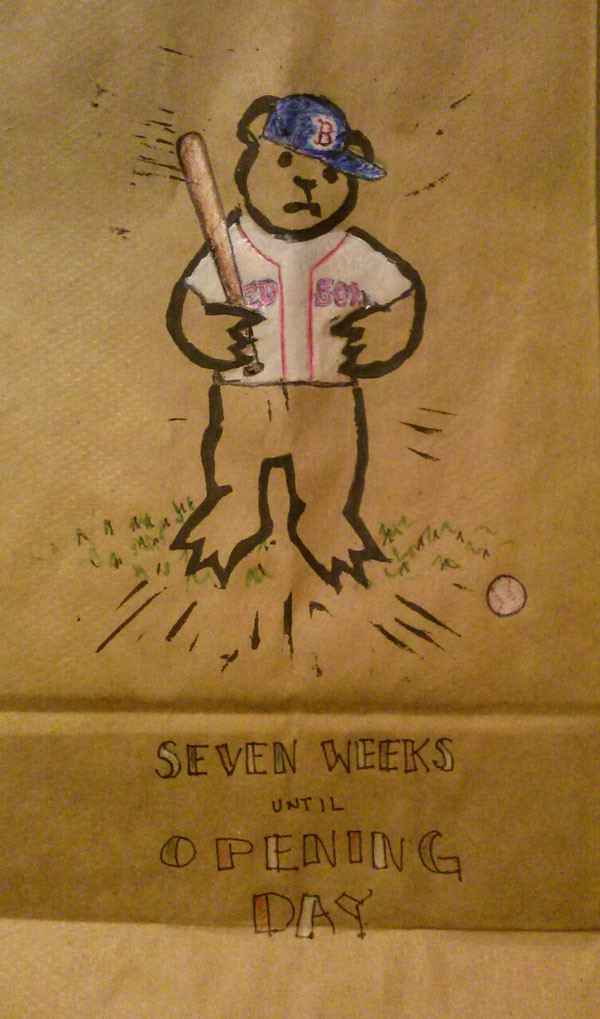 Here’s the bear looking forward to spring. (I grew up in Brooklyn and root for the Mets, but my kids, the Boston-born children of a Boston mother, are Red Sox fans. As long as they’re not Yankees fans, I’m okay with it.) 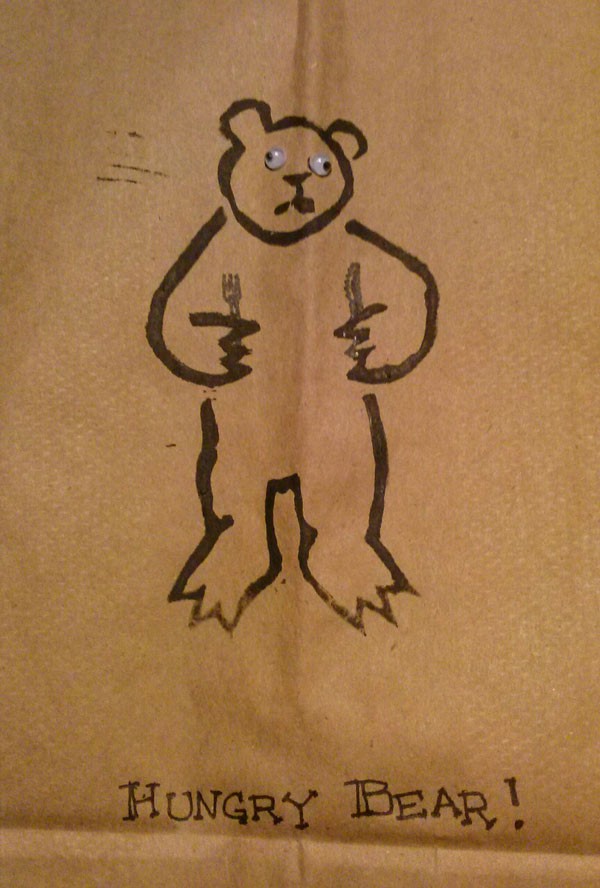 Here he is looking forward to lunch.