As Prohibition showed, taking booze away from the public is wildly unpopular with just about everyone but Bible-thumpers and bootleggers. But what if, instead of being banned, alcohol was simply replaced with something better? Something that makes you feel talkative and sociable without also making you throw up/fall down/feel hungover/get fat/make terrible decisions/get into fist fights or any one of the other things on the shockingly long list of downsides we all know alcohol has?

“Alcosynth” probably sounds too good to be true: A synthetic form of booze with all the fun parts of alcohol but none of its downsides. A world where a night out ends without a single tearful argument, and where not one person worries about how they’re going to deal with their 8 a.m. meeting because hangovers no longer exist. It’s a utopian ideal that for many is more important — and certainly more relevant — than colonizing Mars. It would be—for the first time in the history of a species that has been consuming alcohol for 10 million years (if you include our ape ancestors)—a night of drinking with no penalty the next day. Though it sounds like a fantasy, it is the actual goal of David Nutt, a British scientist who has been touting the virtues of so-called alcosynths since 2014.


Following his groundbreaking research into benzodiazepines (drugs similar to Valium) in the early 1980s, Nutt has lectured at Oxford University, headed up the psychopharmacology unit at Bristol University and been president of the European College of Neuropsychopharmacology. He has also garnered a reputation for campaigning vigorously — and sometimes controversially — for changes to current drug laws, which he claims are interfering with the scientific community’s ability to sensibly study the effects of most psychoactive drugs. One such controversy — in which he published a study claiming that ecstasy and LSD were less dangerous than alcohol — saw him dismissed from the Advisory Council on the Misuse of Drugs (ACMD). In response, Nutt formed the Independent Scientific Committee on Drugs alongside several fellow ACMD members who had resigned in protest.

We spoke with Nutt about his ongoing quest to convince a skeptical public that, with the right mix of targeted chemicals, there really is a safer alternative to alcohol.

In a 2010 study, you determined that alcohol was more harmful to society than either heroin or crack (although those were found to be more harmful at an individual level). How do you go about measuring something like that?
We developed a 16-point scale to work out all the different variables for the ways drugs can harm you: It runs from whether it can kill you when you first take it, like heroin, through to how much social damage and destruction it does. It turned out that with alcohol, there were nine harms to the user and seven harms to society — the social harms of alcohol are so enormous that it came out at number one. Alcohol is associated with over 50 percent of all domestic violence and almost all child abuse; vast amounts of health-care costs; and huge amounts of policing costs. That’s in British society, at least, although the study was replicated in Europe and they came to the same conclusion.

The bottom line is, I’ve worked in the field of alcohol for my whole professional life — I’ve worked on treatments for alcohol withdrawal, I’ve worked on anti-craving agents — and you can never truly get rid of the harms of alcohol, because it’s a toxic substance. We use it to kill bugs on the skin, you know? You wipe your skin with alcohol when you’re doing injections. Then [when you drink it] it’s metabolized to formaldehyde, which is the sort of thing you pickle dead sharks in. It’s always toxic and you can’t get around that. 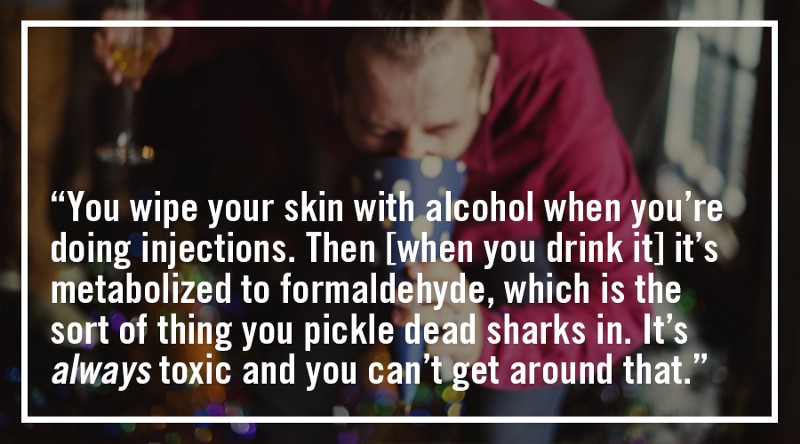 You’ve proposed that we replace alcohol with something less harmful — what you’ve termed an “alcosynth.” How would such a substance work?
Since you can’t get round [the problems that come with alcohol], what we need to do is find a way of replicating the good effects — things like relaxation and sociability, maybe a bit of animation. Over the years, enough people have studied the effects of alcohol on the brain that we’ve got a pretty good idea how to target just the good effects, but not the bad bits.

You’ve patented more than 90 potential alcosynth compounds — do any of them look promising?
Alcohol is a difficult drug to mimic, but we’ve got three or four good candidates. It’s not just about how they make you feel; you’ve also got to consider the cost of production and other variables. There are two compounds in particular that I’d be perfectly happy to raise some money for.

What’s the experience of being “drunk” on them like?
It’s just like alcohol! We tested it on people who’ve spent their whole lives in the alcohol industry and they can’t tell it apart. They say it’s just like being drunk, only you’re not quite as unsteady (which is something we intended — it was designed not to make you unsteady so people are less likely to fall into each other and start fights). I’ve used it a lot and it is like alcohol, only you don’t have a hangover, you don’t have gut ache, it doesn’t seem to cause aggression.

It has all sorts of benefits: It’s got a very clever design in the molecules so the peak effect flattens out, unlike alcohol, which never plateaus out. With alcohol, the more you drink, the more effects you get — it just keeps going until it kills you. With alcosynth, eight drinks is the same as four drinks — you won’t get any more damaged from it. What I want to do is get people drinking alcosynth so they can do what they always wanted to do — sit and talk to each other, have fun and chat each other up — without getting drunk, falling under the table and vomiting. With this stuff, four drinks would be all you’d need for a whole evening. 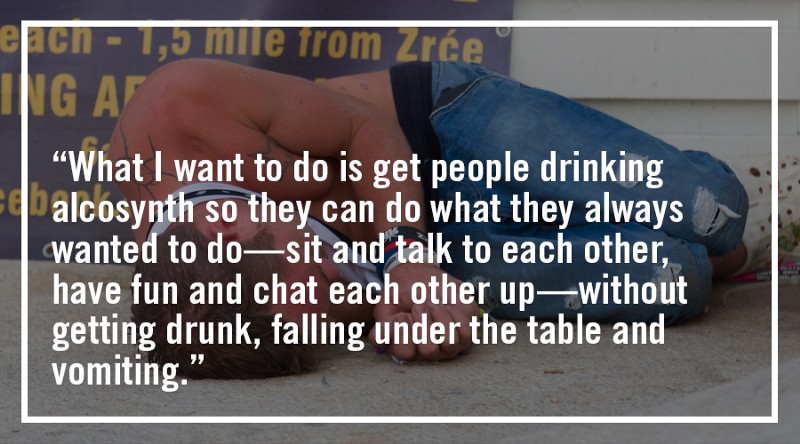 Would it be possible to drive while using alcosynth?
No, I wouldn’t recommend anyone do that. It’ll be safer than alcohol if people do drive, but I’m not going to recommend it. I’m not sure there’s judgment impairment, but there’s certainly impairment in terms of reflex speed and attention. If the police wanted, they could easily make a test to test for it — we could work with them to set thresholds. But we’re not going to encourage people to break the law.

How about other side effects of alcohol like obesity, or liver cirrhosis — are any of those present with alcosynth?
It’s all gone! Those are all driven by the fact that when you drink alcohol, you drink masses of it. You go out and drink a bottle of wine, you’re drinking 100 grams of alcohol — you drink a bottle with alcosynth in it instead, you’re drinking 100 milligrams [of the alcosynth chemical]. You’re reducing the actual exposure of the body by a thousandfold, and I estimate we’re reducing the harms by at least a hundredfold. There are no calories, either, so obesity is less of an issue , too.

It also won’t cause erectile dysfunction over time — that’s caused by either, in extreme cases, liver damage, which affects your testosterone production, or by having a direct toxic effect on the nervous system. Neither happens with alcosynth.

Some early versions of alcosynth used a derivative of benzodiazepine. Is there a chance these alcosynths could end up as addictive as alcohol?
I don’t think so, no. We know where the addiction comes from for both alcohol and benzos, so we can eliminate that. Anything can be habit-forming, of course — biting your nails can be habit-forming. But chemically speaking, it’s not habit-forming.

In that case, could alcosynth be used as a way to wean alcoholics off traditional alcohol? Or are they too dissimilar in effect?
I don’t know if it would be strong enough to get people [with addictions] off alcohol — I certainly wouldn’t make any promises. When people are hooked on heroin, they tend not to find codeine very useful, although it’s a perfectly adequate painkiller for most of us. One thing’s for sure, if people use it instead of alcohol, they won’t become alcoholics in the first place, which is the main thing I’m trying to prevent.

Sounds almost too good to be true. What’s the biggest stumbling block to getting this stuff on the market?
Money — trying to get the investors. People say it’s just too crazy, they’re scared there’ll be a backlash either from the rightwing press or from the drinks industry, trying to scare people off. They want to know, “How do you know it’ll stay legal? How do you know the Daily Mail won’t start telling everyone that children went mad taking it?” Drug laws are so random and irrational: A lot of drugs have been banned just because the media got hysterical about them and the government followed suit. In Britain, we just banned nitrous oxide, which was a harmless drug for 200 years. 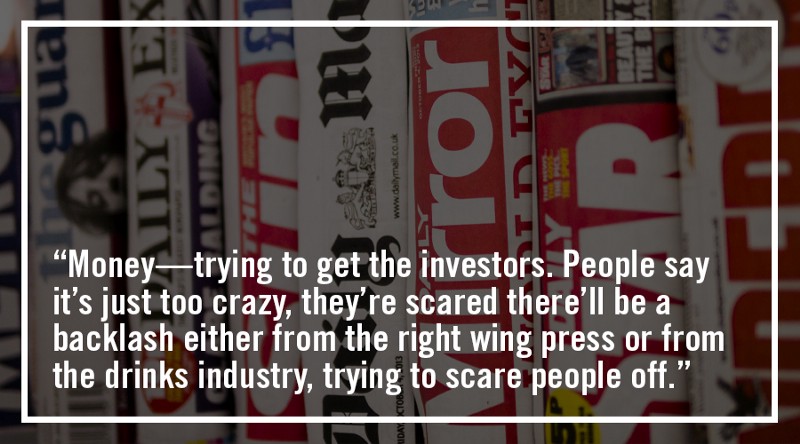 Do you see alcosynth being used in place of alcohol by traditional drinks manufacturers, like whiskey distillers?
That’s what I plan — you could easily get the complex alcohols that give whiskey its flavor and add them without the ethanol. You could buy your alcosynth rum, gin, bourbon, Scotch, wine — I’m pretty confident we can mimic any drink you want. The idea is to present alcosynth as equivalent units of alcohol, so if you want to drink it like a shot of whiskey, you can, or if you want to drink it as a long drink, you can.

What’s the response been from the drinks industry so far?
I think the drinks industry will have to respond to alcosynth in the same way that the tobacco industry had to respond to e-cigarettes — you’ve now got cigarette companies saying they’re going to produce low-toxic cigarettes. When there are healthier options, people want them — the cigarette companies have been forced to follow suit. The same will be true of the drinks industry. Their scientists are already saying, “We knew this was coming, good on you.” But their marketers say, “We knew it was coming, but we’re not going to change our ways until we’re forced to.”

Do you have a preferred preparation for your alcosynth?
It goes into a Tom Collins quite nicely. It’ll go into any cocktail mix, or you can add it to a nonalcoholic beer so you’re drinking alcosynth beer.

There’s also a whole new area that is quite complicated, but we could actually make cocktails by mixing different alcosynths for different effects. We can fine-tune them — you can have your alerting one, or your depressing one, or one that makes you want to sing songs. Some people want to be stimulated and drunk and others want to be sedated and drunk — we could come up with fascinating cocktails if we wanted to. 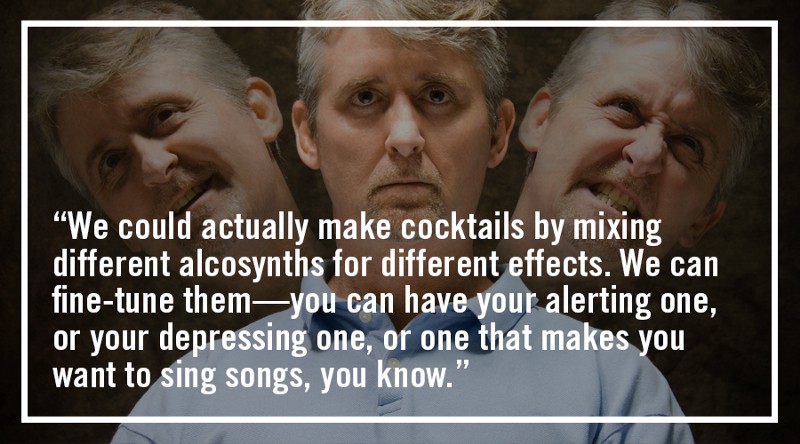 Have you experimented with these “mood cocktails” already?
A little, but that’s a long way down the line.

How realistic is your stated goal of replacing traditional alcohol entirely by 2050?
When you look at how much, in Britain, e-cigarettes have impacted the tobacco industry within 10 years, I think it could happen easily within a couple of decades. Why would you want to poison yourself when you’ve got something that isn’t poisoning you? Anyone making a rational choice is going to prefer alcosynth. At the end of the day, I’m a scientist, and if science doesn’t prevail, then the Earth can go to hell in a handbasket. You can only do so much — you can’t stop the stupidity of humans. But one has to be hopeful. I am hopeful.