Last week, Americans learned that some Chinese men like to beat the heat by flaunting their unimpressive midriffs.

The news was met with guffaws and laughter, as the visible male midriff is virtually nonexistent here in the body-shaming States. Unless, that is, you happen to have played college football at some point in the past 40-plus years. For decades, the male crop top (and its accompanying flaunting of skin) in America has been the sole province of college football.

Football historians place the crop top’s heyday sometime between the early 1980s and mid-’90s, but there’s no consensus regarding who rocked the half-shirt first and when. Its origins remain a mystery.

Bill Schaefer works as a researcher at the Gridiron Uniform Database, a website devoted to the history of NFL uniforms, and he first remembers the crop top being worn by legendary University of Georgia running back Herschel Walker in the early ’80s.

Here’s a video of Walker sporting the crop top in a 1980 game as he annihilates a Tennessee defender who dared to obstruct his path.

Walker would go on to finish third in Heisman Trophy voting that year; he won the prize outright in 1982, cementing his status as one of the greatest college football players ever.

He’s also considered one of the most gifted all-around athletes ever to grace this earth, having excelled at a variety of sports. He was a state champion sprinter in high school, competed in the 1992 winter Olympics as a bobsledder and won a mixed martial arts fight in 2011 at the age of 48. If anyone could make the midriff manly, it’s Walker.

But the look predates him and his Bulldogs dominance. Paul Lukas, ESPN columnist and keeper of Uni Watch, a blog for sports jersey obsessives, associates the crop top with the ’70s as much as the ’80s.

Sure enough, there’s evidence of it as far back as 1971, according to Kent Stephens, curator at the College Football Hall of Fame in Atlanta. “The earliest [crop top] I can ever remember is Johnny Musso from Alabama,” Stephens says. “[Musso] actually made the cover of Sports Illustrated that year in a game against Auburn, jumping over the pile.” 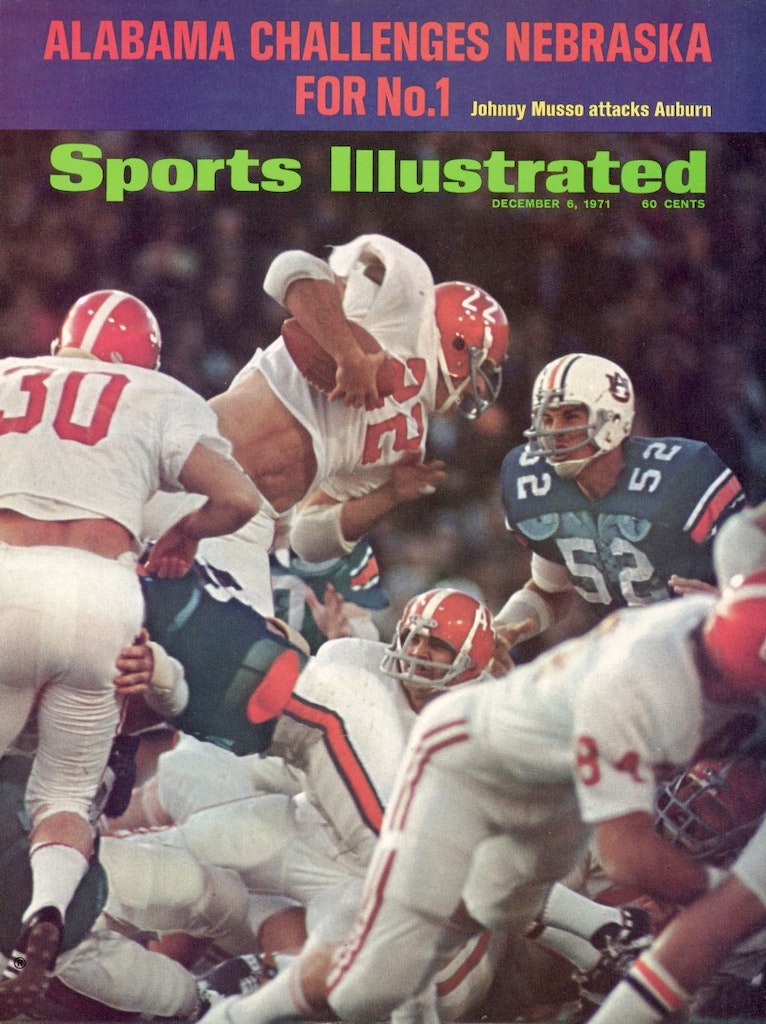 Many of the crop tops worn in the ’70s were unintentional, due to the popularity of so-called “tear-away” jerseys, which were “designed to literally rip away in sections as [offensive] players pulled out of the grasp of would-be tacklers,” according to USA Football, the sport’s national governing body. Some players would end games dressed in tatters, their midriffs inadvertently exposed.

By the mid-1980s, the abs-out look had become ubiquitous, with many players cutting the bottoms of their jerseys or tying them off behind their backs, Stephens says.

Some of college football’s most memorable moments feature the crop top. Doug Flutie wore one when he led Boston College to a last-second, Hail Mary victory over the University of Miami Hurricanes on November 23, 1984; so did the receiver who caught the ball.

Ironically, the Hurricanes are probably the most responsible for popularizing the crop top look.

The 1980s Miami Hurricanes teams were an unapologetically brash set, doing everything in (and sometimes outside) the rulebook to draw attention to themselves. “The Miami Hurricanes brought street values and hood bravado into America’s living rooms,” according to Billy Corben, director of the ESPN documentary The U, and a large part of that attitude was showing off their abs while they played.

Long before he was the highest-paid actor in Hollywood, The Rock was known to show a little stomach playing defensive line for the Hurricanes in the early ’90s (although it’s unclear if it was deliberate or due to a wardrobe malfunction).

“As a student at the University of Miami in the early ’90s, I know many ’Canes wore the crop tops — linebackers, defensive backs and wide receivers, for the most part,” Schaefer says.

But crop tops receded from the college football landscape as the decade wore on, mirroring a wider cultural shift away from the ostentatious ’80s to the authenticity-obsessed ’90s. “They weren’t as prominent [in the ’90s], but they were still popular,” Stephens says.

Many teams began experimenting with a jersey that lay somewhere between full-length and abdominal-flattering half-shirt. Some prominent players continued in the crop-top tradition, though, such as Florida State running back Warrick Dunn and 1999 Heisman Trophy winner Ron Dayne.

The crop top all but vanished from college football in the aughts, only to make a roaring comeback in the mid-2010s thanks to Ohio State running back Ezekiel Elliott.

Elliott will go down as one of the more electrifying running backs in Ohio State and college football history, but his claim to fame will always be the crop top. Elliott, who created his look by tucking the lower half of his jersey under his shoulder pads, claimed the crop top gave him an advantage by making him harder to tackle. And while, yes, it’s tougher to grab a love handle than a handful of fabric, Elliot’s sartorial choice was partially motivated by his desire to flash his six-pack on national television.

Elliott’s midriff was so iconic that President Obama clowned him for it. When the Buckeyes visited the White House in 2015, Obama thanked Elliott for tucking in his shirt for once.

But the NCAA instituted a ban on the crop top jersey that same year. No explanation was given. Elliott called the regulation “silly,” and fans bemoaned the inexplicable rule change.

With that, the male crop top seemed destined to fade from the cultural memory. It has, however, appeared in other cultural realms, with everyone from Prince to Johnny Depp to Kid Cudi to Adam Sandler sporting the look at various phases of their careers.

But nowhere was it more pervasive than in college football.

Elliot is doing his best to keep the male crop in the zeitgeist, though. He wore a cropped collared shirt to the NFL Draft this spring, and now the Dallas Cowboys — Elliott’s team for this (his rookie) season — are selling cropped T-shirts bearing his name.

The merchandise is unlikely to advance male midriff acceptance, however. So far, they’re only marketed to women.