Nick Benas dreamed of being a professional Wiffle ball player when he grew up.

Not a professional baseball player, mind you. He wasn’t delusional. A 5-foot-7, 140-pound high school freshman, he knew he lacked what it took to play for the Yankees.

But when Benas was growing up growing up in Guilford, Connecticut — a quick drive up I-95 from where Wiffle ball was invented in 1953 (Fairfield) and where the yellow plastic bats and the Swiss cheese-cut white balls are still manufactured (Shelton) — one gained more preteen street cred by learning to throw the nastiest whiffle curve, sinker or riser on the block than by hitting home runs in Little League.

“We started playing pickup games on the cul-de-sac on our street when I was six, and I immediately got hooked on it,” Benas says. “When that ball leaves your hand, it breaks the laws of physics. Your buddy gets that look in his eye like he’s going to crack the ball into left, but all you hear is the swoosh of air as he misses — that’s the whiff. It’s a beautiful thing.”

Benas started hosting Wiffle ball tournaments in his neighborhood, charging $25 entry fees for teams to compete for cash prizes. When Benas reached high school, everything but his size increased significantly—bigger turnouts, and with $100 entry fees, bigger cash prizes, too. He and his friends started driving around the Northeast competing in tournaments, but they quickly found that while they may have been the best Wiffle ball players in their small pond, they were getting swallowed whole by bigger fish in New York, New Jersey, Philadelphia, Pittsburgh and Massachusetts. “I could barely even touch the ball the way those guys were pitching,” Benas remembers.

Guys like Pat Leahy, a founding member of the Golden Stick Wiffle League, created in 2002 by Lou Levesque on the north side of Boston.

“We wanted to truly take it way too far,” Levesque tells me, recounting the early days of the league. A few of the bucket-list items included: Playing for six-figure prizes; fully-sponsored teams; a reality show; collecting enough money to provide a disposable income to players and hiring a fleet of 20-somethings to be lemonade girls to “pour lemonade and trickle towels on the neck of players between innings,” Levesque explains. “We were outrageous in what we thought. We wanted guys to find Golden Stick and feel that at 38 and chubby, with a pretty miserable life at home, they could walk on our field and scratch the surface of being the pro they always wanted to be.”

Part of the charm of Wiffle ball is the fluidity in the rules depending on the backyard. Golden Stick, however, sought to bring nationwide consistency to the game by following a strict rule book, the basics of which included: four innings, three outs, two strikes to strike out, four balls to walk, 3-man* teams in the field and no one running the bases — only “ghost runners” determined by how far the ball travels. (*There was one female Golden Stick player in 2007. She won the championship.) 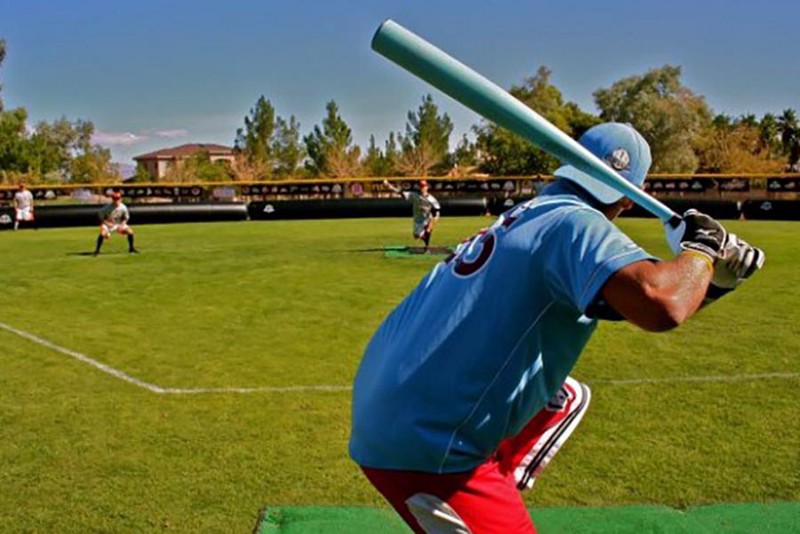 The strike zone — a 2-foot-by-3-foot square behind the batter — determines balls and strikes. An 8-foot-by-8-foot backstop keeps balls from escaping and plays an important role on defense, which we’ll get to in a minute. A “barrel line” in front of home plate (aka “the sh*t line,” since anything that fails to pass this line epitomizes a sh*tty hit) marks the point past which the ball must travel to be considered fair. A second line (“the headline”) is behind the pitcher’s mound. If a player fields the ball in front of the headline and hits the backstop behind home plate in the air (which acts as a first baseman), the batter is out. Once the ball gets beyond that line, it can no longer be fielded for an out. “So as a hitter, you’re trying to get the ball to touch the grass behind that line,” Levesque explains. “And as a fielder you’re trying to defend that ball from touching the grass and crossing that line.”

Once it does, it’s a single. Any ball that rolls to the outfield wall is a double, so a play’s not dead when a ground ball comes through the infield. Instead, outfielders act as goalies at the home run fence to block the ball from making contact with the wall to avoid a double. Hitting the wall on the fly earns a triple, and a home run is a home run.

As such, the difference between Golden Stick Wiffle® and the backyard game you grew up playing, Leahy explains, is night and day. “There might be one or two kids that are above average. They can hit harder and throw strikes. Once you step on the Golden Stick field, though, it’s like, ‘Holy sh*t, these guys are no joke.’ It’s like coming from T-ball and getting thrusted into Major League Baseball. A lot of people get humbled quickly, put their tails between their legs and go home.”


“I’m known not as a flamethrower but more as a guy who can throw every pitch you can offer and change variations to it,” Leahy says. He fashions himself as a Greg Maddux of Wiffle ball: He’s not gonna blow you away, but he will keep you on your toes and have you leaning one way or the other.

He can throw five different pitches at multiple variations of speed to keep you guessing and will never throw two of the same pitches in a row. “My ball has just got a lot of movement, I have total control over it and that’s where my confidence comes when I’m on the mound.” (If you’ve ever watched the Little League World Series, you know the Danny Almonte-type is throwing 77 mph, but it’s the equivalent of a 105 mph fastball since the mound is much closer. The same principle applies in Golden Stick, where the mound is 48 feet from home plate. That means if you get an ex-college baseball player who can chuck a piece of perforated plastic 80 mph with two or three feet of movement, the reaction time is the equivalent to trying to hit a baseball moving 110 mph.)


As Golden Stick grew in popularity over its first five years, Levesque made big plans for the league. He envisioned something similar to the success of the Ultimate Fighting Championship. “I considered myself [UFC founder] Dana White on the Wiffle field,” he explains matter-of-factly. He imagined his players wearing sponsored logos on their uniforms and predicted a trajectory similar to the UFC — which attracted emerging brands that couldn’t afford to advertise with Major League Baseball but were happy to drop 10 grand to sponsor a section of the UFC cage.

It wasn’t necessarily a pipe dream. By 2010, Golden Stick had held more than 40 events in 20 major cities throughout the U.S., had two different reality shows in development with production companies calling them “the next Deadliest Catch” and staged the first ever Golden Stick National Championship in Las Vegas. 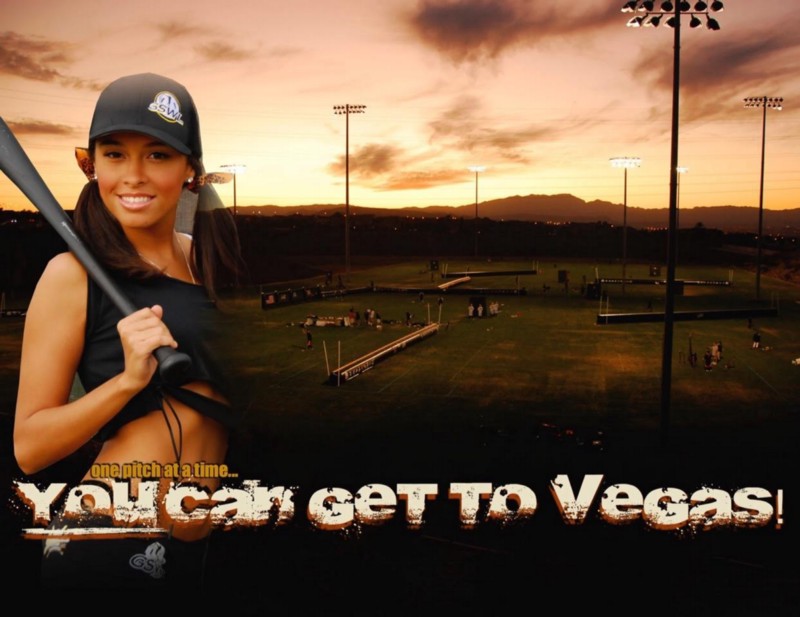 Levesque says Golden Stick’s greatest asset, though, is the athletic diversity on its rosters. “We literally have guys in their 50s competing against 16-year-olds for the same national championship. We’ve got skinny dudes, fat dudes, handsome dudes, ugly dudes, athletic dudes and the opposite — all showing up to play. But that’s not a Golden Stick accolade, it’s a Wiffle ball accolade. It’s one of the most inclusive sports on the planet. Body type and athletic prowess don’t matter. One of our lankiest, most Harry Potter looking dudes is among our best pitchers. I’ve seen countless people who aren’t a typical athlete make a real name for themselves here.”

Today, despite some fits and starts, TV opportunities are still on the table and a new app is in development to help local leagues get off the ground. “I have a strong feeling that with the rollout of backyard play and mobilizing the game on the handheld level we will see an unmanageable uptick in growth,” he says. His goal is to enter next season with a sponsor and to announce a $10,000 or $20,000 prize for the national championship to get people talking about it in backyards across the country.

As for Benas, he found brief success with a league of his own league — Big League Wiffle Ball — which he founded in 2007 and which grew to upwards of 50,000 players before eventually fading away. He still believes in the sport, though. “It has all the loved fundamentals of baseball, but it’s streamlined for our generation. There’s no base running so it’s active but you don’t need iron-man fitness to participate. Where in America is it possible to get 18 guys or girls together one afternoon to play a baseball game? But if you’re grilling out at your buddy’s house and there’s a few of you there, you’ve got enough for a Wiffle ball game.”