According to stereotypes, mechanics exist to prey on those of us not mechanically inclined, try to scare the heck out of us, sell us parts and fluids and fixes we don’t need, and screw with us about how much it’ll cost and how much longer they’ll need our car for — all so that our ride doesn’t, like, spontaneously explode or fall apart.

But how bad are mechanics, really? How can you tell if you’re being messed with? And what can you do if you think you are? Alongside John Ibbotson, the chief mechanic for Consumer Reports who handles everything automotive for the legendary product-testing magazine, we’re going to try and find some (honest!) answers.

On a scale from “1” to “Congressman,” how dishonest, crooked and opportunistic is the average mechanic?
“In general, most garages and shops are honest,” says Ibbotson. “But there’s honesty, and there’s upselling — which isn’t necessarily being dishonest, but doing stuff that would possibly benefit the car, but also benefit their pockets.” Think about power-steering fluid flushes, transmission flushes or brake flushes: Yes, they could be good for your car, but that doesn’t mean it necessarily needs them. Or maybe they’ll tell you your brake pads are worn down and you need them replaced right now, when you could, in fact, get a few more months out of them.

Yikes. So what counts as dishonesty, then?
Scare tactics can be a big, billowing red flag — especially if they’re accompanied by a long list of repairs or an expensive price tag. If the mechanic says you shouldn’t even drive the car home, or you’re fortunate it’s still running, or you’re lucky to be alive, or whatever, you might be reasonably suspicious, especially if you’re the type who services your ride fairly regularly.

The caveat in these instances, though, is for people who don’t regularly service their car. When that car finally develops a problem, or they need to take it in for something, there’s — duh — a greater chance that something major might actually be seriously wrong. “If you haven’t done anything to your car in two years, it probably is dangerous to drive!” Ibbotson points out. “I know people who don’t do anything to their car, and then 18 things are broken, and they go, ‘Why does it cost so much money to fix?’”

If the mechanic tells me I need to replace fluids, a belt or a filter, how am I supposed to know if I really need to?
Ibbotson says that most of those answers can be found in your owner’s manual — there’s a section that lists exactly when to inspect and replace all that stuff. So you don’t have to take the mechanic’s word for it, just check the cheat sheet. And by the way: Those numbers can be wildly different depending on your car’s manufacturer. Ibbotson says that Subarus need a brake flush every 30,000 miles, whereas many GM vehicles don’t mention ever needing a brake flush.

It’s worth noting that climate can also play a part in needing to replace things sooner (for example, if you’re the type who babies your car, it could be beneficial to do a brake fluid flush more often in high-humidity regions, says Ibbotson), but generally, that won’t be a significant difference.

What else can you do if you suspect you’re being messed with?
If you’re at all mechanical, you can ask the mechanic to show you the part that broke, or where it’s leaking, etc. Make them prove it: Say to them directly, “Show me why it needs replacing.” Another tactic — which, Ibbotson says, is the most straightforward thing to do — is to get a second opinion by taking it to another garage. You’ll probably learn a lot by taking it somewhere else and hearing what they both have to say. You might even find a place with cheaper labor or less mark-up on the parts.

Here’s another idea: Google and see if what the mechanic told you needs fixing is a common problem for your make and model. If it is, you’ll see discussions about it and can learn more, like how much you can reasonably expect to pay for repairs.

Speaking of which, how do I find a reputable garage in the first place?
Good news: That’s easier than ever nowadays. “There are a couple things we look for — one is word-of-mouth,” says Ibbotson. Friends, family, neighbors, coworkers, etc. — where do they go? Of course there’s also the internet, which is overflowing with opinions on everything. Ibbotson says that community sites, like Nextdoor, or maybe your neighborhood or town’s Facebook page, if it has one, can be useful places for answers.

Also, Ibbotson says the ASE (Automotive Service Excellence) certification sticker in a shop’s window is a good sign. It means the mechanic is, at the very least, competent — certification requires continuing education every three to five years in different categories, so that the mechanics stay current. Look out for it! 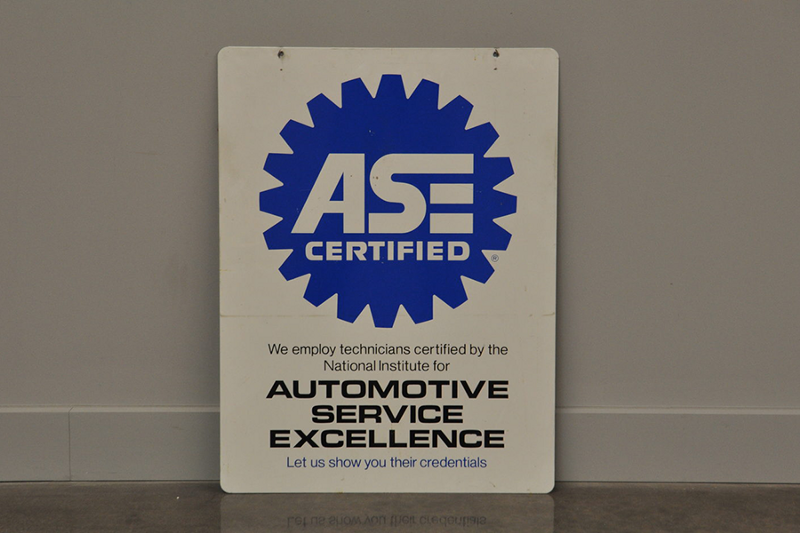 But overall, Ibbotson says people tend to migrate to one particular shop in a town or neighborhood. Find out which one that is, and you can be reasonably sure it’s the right place to go. There are also shops that only work on BMWs, or British cars, or Subarus, or whatever — if that’s what you have, they’re a good option, very generally speaking.

And if I find a garage I want to try, what’s the best way to go about it?
Ibbotson says trust is crucial to working with an auto mechanic — the way he tells it, it might be the most important thing. If you find a garage you want to try, first go in for something minor, like a service. “You’re gonna get a feeling for them: What they did, what they charge,” Ibbotson says (for example, if you’re somebody who maintains your car, yet they give you a long list of things that they say need repairing).

The key here is, if you bring your car back to the same garage and build up some loyalty with them, they’ll start to tell you when things like your brake pads are getting worn, and to come back in a few months. But if they see you as the kind of person who goes all over town to get work done, there’s a greater chance they’re gonna try and get as much money from you as they can, while they can. And whoops, looks like your engine block’s cracked there, and hey, what’s going on with that axle…?