Coming from a family of alcoholics probably wasn’t great for your childhood, nor is it great for your likelihood of turning into one yourself. After all, the children of heavy drinkers are four times as likely to develop a drinking problem. But that’s not the only thing that sucks about being the spawn of a boozehound or two. A new study has found that descendants of lushes are also inclined to remember their hangovers more vividly and rate them as worse.

The research, from psychologist Richard Stephens at Keele University in the U.K. (and colleagues at universities in the U.K. and Canada), involved two surveys, one about remembering hangovers, and another to test their actual severity. Other research has found that people from boozy families often report more hangovers, and worse ones. But the researchers punch holes in the latter conclusion, as those studies didn’t properly control for the amount of alcohol consumed, often measuring by weekly or monthly consumption, overlooking that even heavy drinkers vary the amount they drink from night to night. 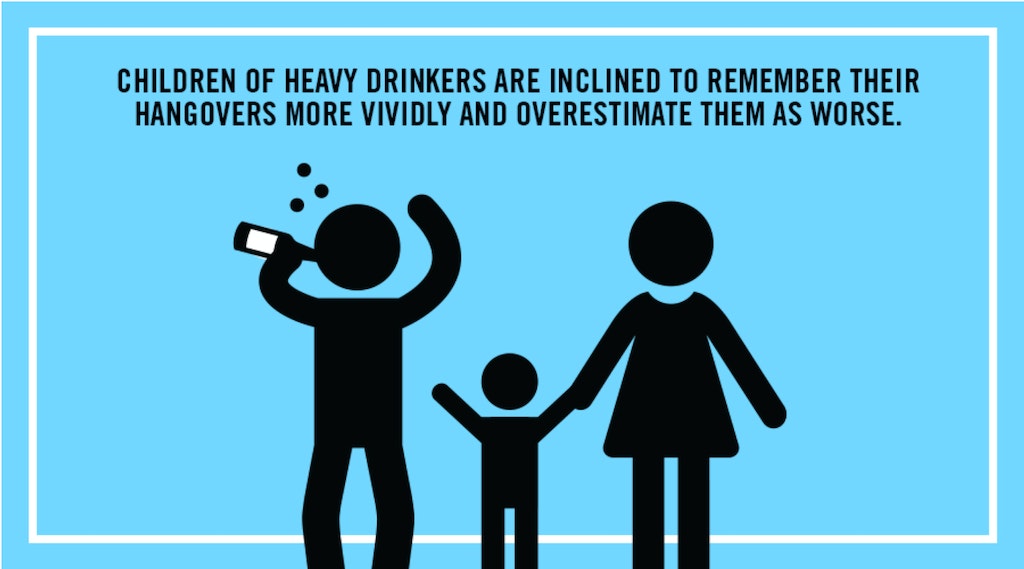 So here the researchers sought to measure hangovers in terms of nights when the participants drank at their highest typical volume, controlling for height, weight and gender. The first experiment surveyed 142 people in the U.K. (men and women aged 18 to 29) about their drinking and hangovers over the previous year, 24 of whom had a history of problem drinking. The respondents with a family history of alcoholism remembered more frequent hangover symptoms than those who didn’t — regardless of whether or not they were problem drinkers.

In the second study, 49 drinkers (men and women, age 18 to 23), 17 of whom had a family history of alcoholism, were interviewed the morning after drinking to determine how bad their hangovers were — they indicated how much they drank start to finish for the evening, how much sleep they got, and how thoroughly hung over they thought they were that morning. The researchers thought people with a family history might have particularly brutal hangovers, which could be why they remember them more vividly and report them as worse. They were able to easily predict who should be hung over based on how much they drank and their blood alcohol levels the previous night, factoring in body mass, too. But the people with boozing families in their bloodline didn’t have worse hangovers—they just thought they did.

The researchers admit that they aren’t sure exactly why this is the case. Maybe drinkers predisposed to become alcoholics are into the bonding experience of complaining about hangovers together — a Norwegian study they cite found that young heavy drinkers coped with hangovers by commiserating a lot about how bad they were. Maybe people from families with alcoholism overreport their severity because they feel guilty after a childhood watching parents drink and feel bad about it later.

What all this research ultimately points to is some hope for those predisposed to alcoholism: Maybe just thinking their hangovers are really bad, Stephens explained in the press release about the study, will discourage future drinking. Maybe this is your brain’s built-in Hail Mary to keep you from stumbling too far down a path whose steps, at least genetically speaking, are already laid out for you. After all, who hasn’t gotten obliterated one night, suffered horribly the next day, and sworn off drinking forever? If only someone could bottle that.