South Korea is a hard-drinking country. On average, each member of its population drinks 12.3 liters (3.25 gallons) of alcohol per year — a fact that led to more than $8 billion in lost production, hospitalizations and early deaths in 2013 — and 13.7 shots of liquor per week. To put that in perspective, the notoriously heavy-drinking Russians down a comparatively weak 6.3 shots per week (or half as much). South Koreans, in short, consume more hard liquor than any other populace in the world.

What does this have to do with dessert on a hangover?

Gross as it sounds, there’s science — albeit a small amount — supporting its curative properties, too: A 2012 study published in the Journal of Neuroscience found that oriental raisin tree extract (dihydromyricetin) reduces symptoms of intoxication in rats. How it works remains unclear, but experts have a few theories: “Oriental raisin tree fruit juice is likely extremely high in antioxidants,” says Dana Hunnes, senior dietitian at the Ronald Reagan UCLA Medical Center. “Its sweetness and carbohydrate composition may also help reduce hangovers — part of that hangover feeling is related to hypoglycemia (aka, low blood sugar).”

But the question remains, why an ice cream? Who in their right mind chooses to eat something sweet when dying from a hangover? Would something salty and/or fatty not be a more appetizing delivery system for these antioxidant juices?

A quick Slack poll of my office seems to support my bafflement (before quickly spiraling into an unnerving conversation about lard): 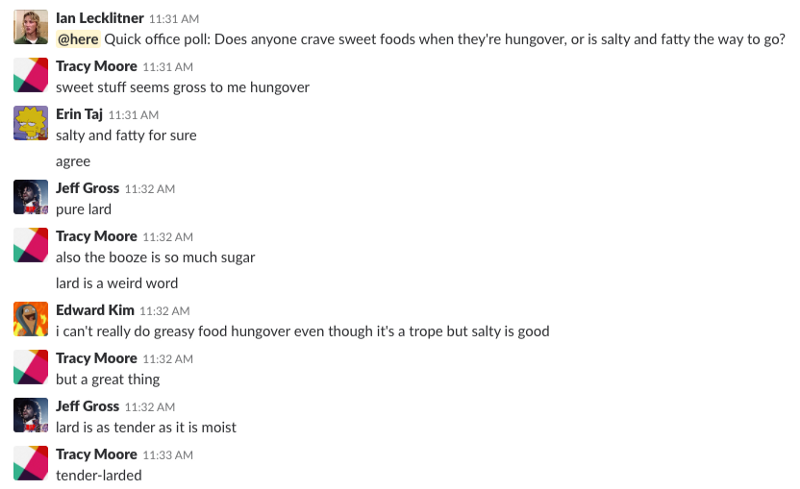 “Greasy and salty every time,” editor Nick Leftley says, decisively. “The idea of eating chocolate or pastries with a horrendous hangover is slightly less appealing than pounding cheap tequila shots.”

Once again, there’s science to explain this: A study from Purdue University found that alcohol triggers a massive release of galanin, a protein that encourages the ravenous consumption of fat (even the next morning). Alcohol also enhances the taste of salt and fat, according to nutritionist David Friedman, author of Food Sanity: How to Eat in a World of Fads and Fiction, and there’s likely still enough of it in your system the next morning to make that cold slice of floor pizza taste extra delicious.

Booze is a diuretic , too, which encourages a ton of peeing that eventually results in next-day dehydration. That causes us to crave salt, since sodium helps the body retain water.

On top of all that, Hunnes theorizes that sugary foods simply become less palatable when you have a belly full of booze. “The last thing I want when I’m nauseous is something cloying in my mouth,” she says. Couple that with the fact that sugar can directly cause (and worsen) nausea, and you’ve got a good reason to tell that hangover ice cream to go take a flying leap.

Then again, I’ll take two dozen if they actually work.