When it comes to sex, one adage holds true: Doing it is a lot different than talking about it, and people have wildly different ideas about how to discuss sex, particularly when it comes to sexual history. Should you tell someone how many people you’ve slept with? What does your number mean, anyway? It’s different if you’re a man! One survey found that 22 percent of people never reveal how many people they’ve slept with, with another 30 percent waiting until a relationship was exclusive to dish.

All this anxiety about when or if to reveal the number hinges on the fact that, high or low, we don’t know how a new partner will react. Though common sense tells us somewhere between virgin and gigolo is probably fine, once you put it out there, there’s no taking it back. That said, a new study suggests there’s a just-right number of previous partners — and claims that, at least in the case of a potential long-term relationship, the ideal number is three. That’s right. Three. But before you feel too embarrassed about your number, the average age in the study was 21.

In the paper, published this month in the Journal of Sex Research, researchers Steve Stewart-Williams, Caroline Butler and Andrew G. Thomas looked at how sexual history affects attractiveness. The study was based on survey results from 188 adults; its findings contradict the results of a survey published last year that showed the ideal number as a little over seven.

But contrary to the previously reported study that the ideal average number of sex partners is around seven, they found that men and women both preferred their partners have less than half that number. What gives? We spoke to Stewart-Williams by email and asked him to parse the results for us. 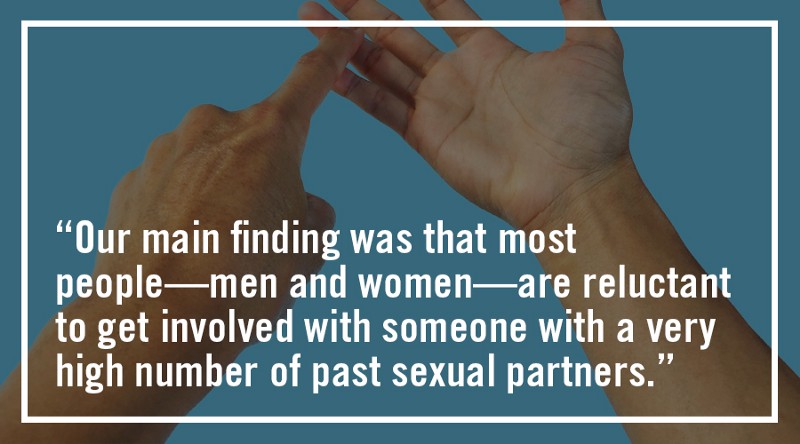 In research like this, I always first wonder how reliable any self-reported performance like sex can be. Won’t men overstate past partners and women will understate? Are you able to account for such things?
There’s a fair amount of research looking at how accurate self-report methods really are. The short answer is that they’re not completely reliable — no method is. But as a general rule, people’s responses on anonymous surveys tend to be quite accurate and tend to correlate quite well with more objective measures.

The pattern was surprisingly similar for both sexes. When we asked about long-term relationships, there were basically no sex differences in how willing people were to get involved with a person with a given number of past sexual partners. For flings and casual relationships, on the other hand, there was a small sex difference: Men were more willing than women to get involved, regardless of how many past partners the person had had. But even for casual relationships, both sexes tended to prefer someone with a handful of partners, rather than a lot of handfuls. The study was done in the U.K., by the way, and it’s very likely we’d get different results in other cultures. 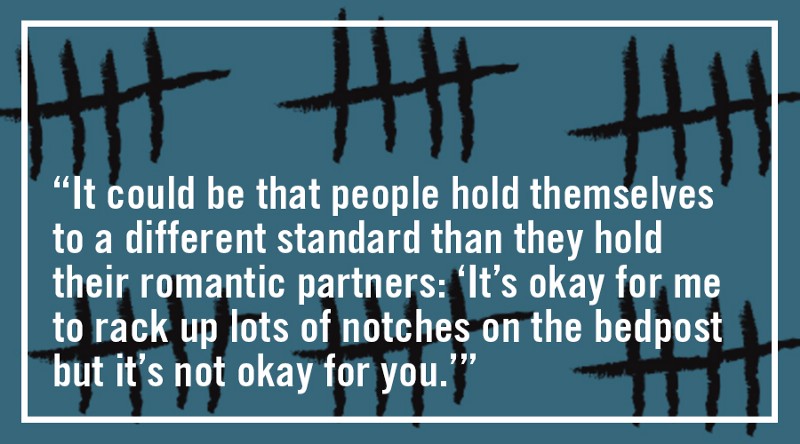 Can we safely conclude that attitudes about sex are more aligned than ever?
They’re probably more aligned than they were in the bad old days, when men were allowed to sow their wild oats while women — at least in the upper classes — were supposed to be virgins on their wedding nights. To be honest, I doubt things were ever quite as black-and-white as that. Still, it’s fair to say that the traditional sexual double standard is a lot less prevalent today than it used to be. There’s quite a bit of evidence pointing in that direction.

The average of three partners seemed really low — were you surprised by that? A study last year found that the average millennial will have eight partners during their lifetime.
Yep, we were definitely surprised. I’ve got two thoughts about it. First, although people were most willing to get involved with someone with two or three past partners, it was pretty close and it’s probably more accurate to say that people preferred someone with between one and six past partners. Second, the participants in the study were quite young. The average age was 21, and plenty were still in their teens. We found some evidence that, as people get older, they get more tolerant of higher numbers of past partners. That makes sense; it’s very different to have, say, 15 past partners when you’re 18 vs. 15 when you’re 35. To my mind, the key finding isn’t the exact numbers but the overall trend — that is, the fact that people’s willingness to get involved with a person increases for a while as that person’s past partner number increases, but then plateaus and eventually starts nosediving.

Can you explain for the fact that average number of partners those surveyed had was actually different than their idea of the optimal number they should have had? Are we still having more partners than we think we should? And what’s that all about?
Good question — I’m not completely sure. It could be that people hold themselves to a different standard than they hold their romantic partners: “It’s okay for me to rack up lots of notches on the bedpost but it’s not okay for you.” Or it could be that people just often end up having more sexual partners than they plan to or than they think they should. That could easily happen if, for instance, people take longer than expected to meet someone they want to get serious with, or someone who wants to get serious with them. 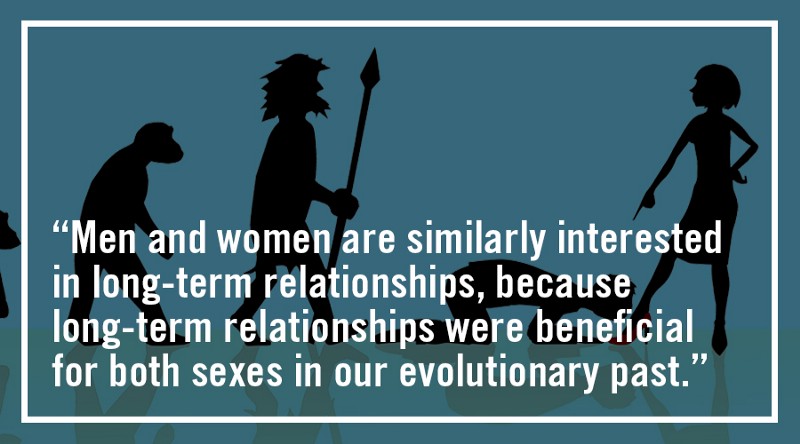 Can you explain the gender difference between the long-term and short-term relationships and number of partners? That’s where there seemed to be a lingering sense of that double standard.
There’s a general trend in human sexual psychology that the sexes are more similar when it comes to long-term mating than when it comes to short-term. If you ask single people how strongly they want a long-term relationship, there’s often not much of a sex difference: Both sexes are pretty keen. But if you ask how strongly they want a fling or a one-night stand, then you do find a sex difference — the predictable one.

This pattern makes good sense in evolutionary terms. Men and women are similarly interested in long-term relationships, because long-term relationships were beneficial for both sexes in our evolutionary past. But women tend to be more cautious than men about casual sex, because women were the ones who risked getting pregnant. That’s not to say that women are never interested in casual sex — some are; some aren’t. But on average, women tend to be less interested than men. And women also tend to be choosier about their short-term sexual partners.

Your study, in essence, seems to prove that nobody likes a “prude,” but nobody likes a “slut” either. Were you surprised that the belief in the standard was more prevalent than the standard itself? Any ideas why we’d cling to these notions when they no longer seem to serve us?
Well, in some ways, these notions might still serve us. People with a lot of past partners really might be a worse bet as long-term partners. That’s no problem for people who don’t want a long-term partner. But for people who do, it may be worth being a little more wary than you otherwise would be. We shouldn’t jump to conclusions, of course. But we do need to play the odds.