For some people, a trip to the beach ruins their hair for the rest of the day: Somehow, your hair both super dry and sticky; and your scalp is also caked in sand (and that sand doesn’t go away — it’s seemingly there forever now). On the other hand, some people love the beach hair look so much that cosmetic companies have chemically recreated and bottled the effects as so-called “salt spray.”

So where do the kings of beach hair — i.e., surfers — land on the subject? And how do they get sand out of their hair? We turned to some serious surfer bros for their thoughts.

David Scales, host of Surf Splendor podcast: Listeners have coined a name for my hair, “The Chop Hop” (after a lame surf maneuver). Haircare is an ongoing theme/discussion topic after I revealed that I stopped washing my hair three-plus years ago. I rinse it and shower daily, but not a single drop of shampoo since February 15, 2015.

Listeners have embraced the trend, and just this weekend, when we had our annual trade show, dozens of fans shared their stories of no-washing, from young men to a 55-year-old woman who is on her seventh week of no shampoo. Nothing but praise and positive feedback. In short, zero maintenance: Simply rinse while showering; nature does the rest. Here’s photographic evidence of “The Chop Hop” in all its glory: 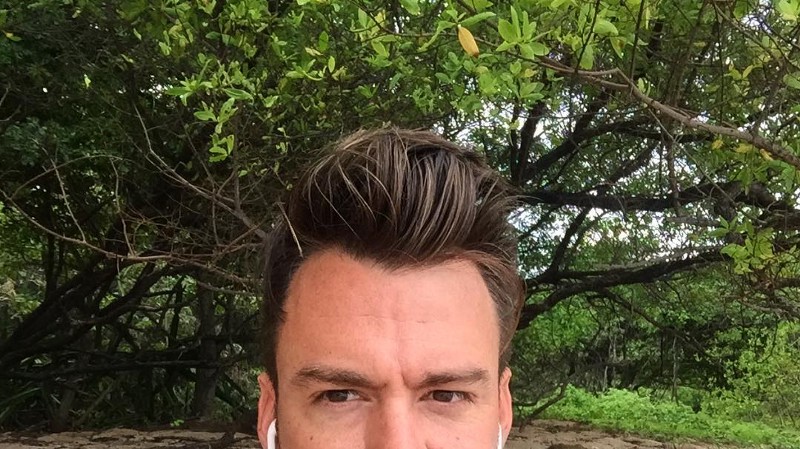 Will Hines, student at the University of California, Santa Barbara: I love beach hair; it’s a byproduct of living close to the beach at this point. For the most part, it makes my blonde hair blonder, and constantly having sand all up in your scalp just becomes a part of your being — everyone’s always covered in sand, so people are generally chill with it.

Ross F., surfer in California: The day that I decided to not shampoo my hair after going in the ocean was the day that I became a man with “good hair.” I (and my wife) love that it gives my hair a lot of volume — better than any product I’ve ever tried using. In fairness, though, I haven’t tried any “beach hair” products.

I’m on the water three to five days a week, and I use shampoo/conditioner two to four times per month, depending on how gross the water is. I haven’t noticed any issues with not shampooing more — a thorough rinsing seems to get all the particulates out, and it doesn’t stink or anything. For sure my hair has less shine and feels a bit coarser, but the volume is what I’m after so the trade-off is worth it.

Tom H, surfer from Queensland, Australia: I wash my hair maybe thrice a week. After surfing, it gets hella tangled unless I comb it before it dries, so I do that. My locks look best when dried out after dawn patrol when I’ve washed it the night before. Non-coastal kooks who rock the beach spray are just wannabes — either get the look from a few hours spent at the beach/amongst the waves, or don’t get it at all, narmsayin?!

Ryan G., surfer dude from parts unknown: I go at it with handfuls of conditioner. My hair is legit a dreadlock after I get out of the water, and the conditioner loosens it up so I can get my fingers through it. I don’t shampoo either; I just kind of go at my scalp with my fingers in the shower and that gets the job done. Overall, my hair’s pretty much impenetrable when it’s beachy.

Harry Knight, producer of the Surf Simply podcast: The honest answer about “Beach Hair” is that most surfers who care about how they look spend a lot of time and money trying not to have beach hair. Constant exposure to sunlight and salt water is brutal to the body, and the bleaching and drying out of hair is just one of the consequences.

The classic Beach Hair look is really a result of not protecting, washing or styling the hair, whether due to running out of time because you were surfing too long or just laziness. After getting out of the water, the best most surfers manage is a 10-second rinse in fresh water to move some of the salt around and a towel dry before heading off for breakfast/work/first date/etc. The bleached-out color is a consequence of a lack of sun protection and a helpful indicator of the likelihood of skin cancer later in life.

So while the final result may be the messy, blond, “devil-may-care” look, on closer investigation, you may not be so impressed with what you find in there.

Jesse Neushul, surfer in Isla Vista, California: The whole point of beach hair is that you don’t do anything. If it’s gonna be wet most of the time, why waste the effort making it look good for the short periods of dryness in between? The blonde and salty effects just tend to happen with the ocean water. Anyone trying to artificially create that isn’t actually surfing a lot, and therefore, they’re a total poser.