There are two kinds of people in this world: People who love an ice-cold beer in a piping hot shower, and people who’ve never tried it. For anyone who doesn’t know what a shower beer is or couldn’t guess, the enthusiasts at ShowerBeer.org have laid out the process in three easy steps:

The ideal type of beer is hotly debated — more on that later — but what isn’t is what happens after cracking the cold beer and feeling it wash through you: magic. Fans call it the “ultimate relaxation,” and the pleasure does not discriminate. Shower beers are universally beloved across demographics; They’re celebrated by broke college students, men, women, runners, anyone post-workout or anyone who has just, say, used a lawn mower.

The pleasure can also be very pragmatic. College students have been known to take a shower beer to finish off the keg left in the bathtub from the night before. Actress Margot Robbie told Harper’s Bazaar she uses a shower beer to help her fall asleep, a trick she learned from Tina Fey’s costume designer on the set of Whiskey Tango Foxtrot.


There’s also an entire Reddit forum, more than 30,000 subscribers strong, devoted to the shower beer, where lager lovers, first-timers and shower-beer veterans document themselves in the act. The posts are wonderfully simple, a selfie of someone in the shower drinking a beer, smiling, waxing enthusiastic. “My first shower beer ever!” one such entry reads. “I now understand why this is a thing.” 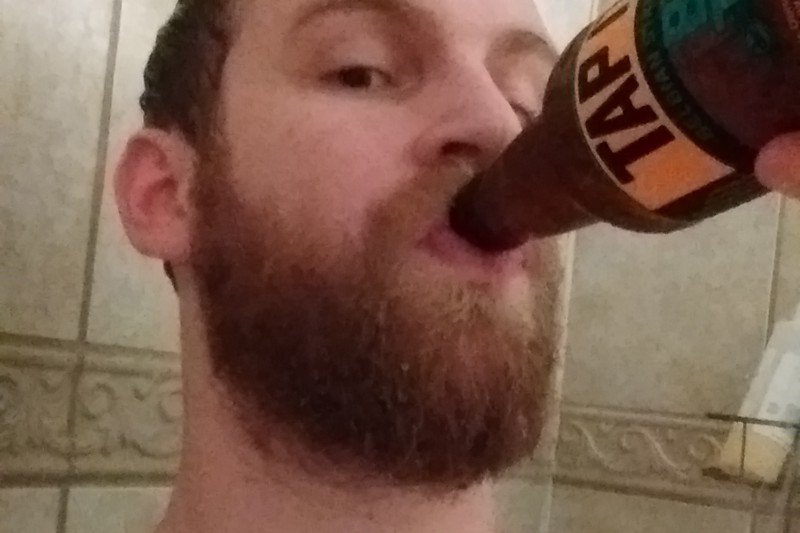 But it’s unclear exactly when, precisely, this became a thing. Common sense suggests it probably involved manual labor and a very hot day and goes back at least 3,900 years to ancient Mesopotamia, when beer was first documented in writing.

“Unfortunately, I don’t know of any evidence on drinking beer while bathing,” says Max Nelson, a professor at the University of Windsor who wrote The Barbarian’s Beverage: A History of Beer in Ancient Europe. “However, among the Romans it was common to drink wine when bathing or at least at the baths. Not everyone approved, though. The second-century A.D. poet Martial speaks of a poor man named Asper who shouted that the wine of those drinking at the baths should be poured out and their cups smashed. However, when he gained an inheritance and could afford it, he never left the baths sober.”

It should be noted that the contemporary shower beer is more about indulgence than inebriation. Because it’s typically employed in two basic scenarios — to end the day by washing off the bad vibes, or to start the night with a little light pregaming — there’s a mildness built into the experience. It’s the sort of thing you do to get a little buzz, not get plastered.

And the reason it feels so darn good? If the science sounds a little complicated, the concept behind it is simple. The scientific explanation for why standing in a hot shower sipping one just-right beer produces a certain relaxing, delightful, somewhat transgressive thrill is called thermic alliesthesia, a physiological sensation of pleasure that occurs when, in this case, your hot body consumes a cold beverage, sending your insides atwitter to sort out the difference.

Your body wants to maintain a certain temperature, and when anything changes that, the work it does to get back to the golden state can feel really amazing. “All physiological processes within the body are regulated so that the organism stays within a range that’s optimal for physiological function, i.e., homeostasis,” Davide Filingeri, a leading expert on thermosensation and physiological thermoregulatory responses, writes via email from the U.K., where he’s a lecturer at Loughborough Design School. “In terms of body-temperature regulation for example, our body adjusts its internal temperature so that this is maintained within a certain range (around 98.6 degrees Fahrenheit).” Then, whenever we do something that shifts us out of that range — warming up in a hot shower — our body starts working its inner temperature back to normal. That’s where the beer comes in as a terrific facilitator.

“In essence,” Filingeri explains, “your cold beer is seen by your brain as a useful stimulus that could help bring its temperature to the range it likes to be within.”

The term alliesthesia was coined in 1971 in the journal Science by Canadian scientist Michael Cabanac, who asked his subjects to sit in a water bath of different temperatures and then dip their hand into a container containing substances of different temperatures, and describe the sensation. When the subjects were in a hot bath and had a higher internal temperature, cold or cool stimuli felt pleasurable, but warm stimuli did not. On the flip side, when they were in cold water, only warm stimuli did the trick. Cabanac’s conclusion: How pleasurable anything feels to us — a breeze, a taste, a scent — ultimately depends on how useful our brain thinks it will be to getting back to that normal temperature. And once we experience this sweet spot of sensation, we want more of it.

“Accordingly, the brain processes that stimulus as pleasurable, as that pleasure would ultimately reinforce that behavior (i.e., you get hotter, you need to cool down, you get a cold stimulus, that can help you cooling, this is pleasurable, you want to get more),” Filingeri wrote.

It appears more and more people are chasing this pleasure. A Google trends search shows a big spike in searches for the shower beer this year, particularly when the Swedish brewery Pang Pang and a creative firm called Snask got together to make something called “Shower Beer” for their domestic market — a 6-ounce, glass-bottled IPA with 10 percent alcohol content, designed specifically for pregame drinking in the shower.

And here’s where the debate over what kind of beer is best comes in. “Any beer is a potential shower beer, really,” Snask’s creative director Fredrik Ost explains via email. “But we wanted to make one specifically for the shower and getting ready to go out. The size is small so that you have time to drink it before it gets warm. The strength is to compensate for the small size and will create the same effect as a normal-size beer.”

That seems straightforward enough, but GQ called the Pang Pang Shower Beer “stupid as hell” for three reasons: The bottles are glass (too easy to shatter); they’re too small (not enough beer to relax with); and the beer is too strong (defeating the not-getting-drunk purpose of the shower beer).

As the Shower Beer subreddit demonstrates, however, most people seem to do okay with glass bottles. And Ost says the screenprint on the Shower Beer bottle provides some grip. There’s also a new product, the Sip Caddy, designed specifically for holding your beer or any drink in the shower. (You can always use a beer koozie, too.)

For some shower beer drinkers, six ounces might be perfect. The A.V. Club praised the Shower Beer’s smaller size because “for too long we’ve all struggled with finishing an entire 12 ounces of beer while we’re in the shower.” And really, the beer strength is a matter of individual taste. I’m inclined to agree with those in favor of a lighter, crisper beer if the point is to cool off on a summer day — darker beers are, after all, associated with drinking during colder weather — but to each his own. (Redditors post pictures of everything from cheap beer to high-gravity craft beers.)

While the particulars of enjoying a shower beer may vary, there’s one part of the experience that’s universal: It only lasts for so long. Per one guide for shower-beer drinking, the blissful relaxation that follows lasts 30 minutes — 90 minutes at the absolute most.

That’s in the science, too. Filingeri explains that alliesthesia is temporary, a phase that only lasts long enough to return the body to its ideal state. “Interestingly,” he writes, “when the body re-establishes its normal state (e.g., you cool down or you get out of the shower or Jacuzzi) the same cold stimulus (the beer) isn’t as pleasurable as it was before (although it is the same beer!). This is because the stimulus isn’t behaviorally advantageous anymore.”

That’s not necessarily a bad thing. As pleasurable experiences go, 90 minutes of bliss for the price of a hot shower and a single beer is cheaper than most anything else guaranteed to feel that good.