There’s never been a more crucial time — well, other than your awkward teen years — to care what your face looks like. No, I’m not advocating for all of us to turn into conceited schmos, but now that so many of us have largely settled into spending much of our work lives in virtual meetings where the only thing to look at is one another’s faces, you don’t want your face to look all jacked up, do you?

And by jacked up, I of course mean that massive red pimple which always seems to be lurking millimeters under your skin, ready to appear at the worst possible time — like when you’re presenting that new campaign to the whole company, or when you’re asking for that raise.

Well if problematic pimples are the problem, then an Dollar Shave Club’s Big Cloud Acne Eraser must be the solution. “Uh, what the heck is an ‘acne eraser’?”, you’re probably asking yourself right now. Well, Kyle Zimmerman, Dollar Shave Club’s resident product guru, has the answers. “Acne Eraser is what the skincare industry calls an ‘acne spot treatment,’” Zimmerman explains. “That is, it’s a product that you apply only to the trouble spots on your face and rub it in. The workhorse active ingredient is salicylic acid, which is one of the best-known acne treatment ingredients. It goes into the pore and to remove all of the residual oil and dirt that lie at the root of pimples, helping to ‘erase’ them away.” 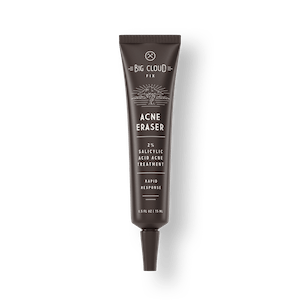 Sounds cool, but is it better than popping a zit, like most of us have been doing since time immemorial? Well, yeah, duh: Doing so is an open invitation for red, splotchy skin and infection, says dermatologist Rajani Katta. In fact, it’s so bad for your skin you should never, ever do it — immensely satisfying though it may be.

Besides, why pop when you can erase: “Not to toot our own horn, but we had clinical testing done that shows that the Acne Eraser helps reduce the appearance of a zit in just two hours,” Zimmerman says. That means a pimple could end up less girthy, less red and less likely to make your boss on the other end of your video call think you lied about your age on your work application.

Not only that, but unlike other products that purport to take care of pimples — like pimple patches — you can use it whenever you want, like right before the big meeting. “The Acne Eraser can be applied any time of day, and is fast absorbing so people won’t know you have it on. Pimple patches are a dead giveaway, and you wouldn’t want to wear one of those on Zoom or on a date.”