My grandfather was a Dick.

So, yeah, my grandfather was a Dick. Not a big Dick — he wasn’t an exceptionally large man, 6 feet tall — but a Dick, no less.

He was certainly a nice Dick. Dick always beamed when he saw his grandkids. There was seemingly nothing we could do to make Dick sad. He was also a prankster. His wife (my grandmother) was hard of hearing, and Dick would troll her by mouthing words from across the room, making her think she couldn’t hear when really he wasn’t even making any sound. A sly Dick, he was.

He was the first Dick I ever met, and he will almost certainly be the last. Because no one calls their sons Dick anymore.

In 1933, Dick hit its peak popularity in the U.S., ranking as the 144th most common name to appear on baby boys’ birth certificates, according to the Social Security Administration (SSA). The name has been in steady decline since, falling out of the top 1,000 by 1969. The name didn’t even register on the SSA’s name tally for 2014 (the latest year for which data is available) — the SSA doesn’t recognize a name if it appears on fewer than five birth certificates.
The Dicks are practically extinct.

The transformation of the word “dick” from endearing nickname to phallic slang term was so complete by the time I was a child that it was difficult for me not to snicker whenever I heard someone mention my grandfather by name, and impossible for me to understand why any man would choose to go by it.

Linguists dispute when this transformation started, although they agree it began sometime in the 19th century. British lexicographer Jonathon Green, in his textbook Green’s Dictionary of Slang, claims the first use of dick as a slang term was in the 1836 short story “Do as Father and Mother Do,” published in a British songbook titled — I shit you not — The Cockchafer. (Songbooks were commonly distributed in pubs so patrons could sing along to the music, Green says.) It reads:

“Says Dick, ‘It’s true, a dagger long,
I have got my sweet delight.”

But to point to this is as the genesis for the transmutation of dick seems a stretch, says Michael Adams, Provost Professor of English at Indiana University and author of Slang: The People’s Poetry. A generous interpretation might be that the character Dick is making a play on his name, using it as a double entendre.

There are numerous textual examples of dick as penis from 1890 onward, Adams says, but charting its prevalence among the general populace is even trickier, as it can take decades for a slang word to “percolate up from the street” to its use in pop culture.

The British Army was the first group to adopt the slang use of dick, according to Cleveland Evans, a professor of psychology at Bellevue University who specializes in onomastics, the study of the history and origin of names. “It was probably just an accident that that was the first group that used it,” he says. “My guess is they picked dick because it rhymes with prick, which has been a slang term for penis as far back as Shakespeare.

Evans thinks dick didn’t cross the pond until sometime in the 1940s, but there’s proof that Americans were talking about dick as early the late ’20s, per Adams. In 1928, famed linguist Allan Walker Read took a road trip through the western U.S. to study the words people used to graffiti bathrooms. He published his findings in Lexical Evidence from Folk Epigraphy in Western North America: A Glossarial Study of the Low Element in the English Vocabulary in 1935, including a section dedicated to dick:

“Here to the girl with the coal black eyes.
The soul deceet the inventor of lies.
I hope in hell she will roost.
She sucked my dick with a hell of a dose.”

Read had to privately publish the book in Paris because its contents violated U.S. obscenity laws, and only 75 copies were printed, Adams says. Dick was also gaining traction among criminals during this period as an epithet for detective or, more generally, police officer — hence, comic strip crimefighter Dick Tracy, the world’s first smartwatch model.

Perhaps the biggest contribution to dick’s ascendence was Henry Miller’s notoriously sexy novel, Tropic of Cancer. A first person monologue about Miller’s life as an expat in Paris, the book catalogued his sexual conquests and inner thoughts in graphic detail: “All through the meal this patter continues. It feels exactly as if he had taken out that circumcised dick of his and was peeing on us.”

Tropic of Cancer scandalized readers and ran afoul of obscenity laws: As with Read’s Glossarial Study, it was banned in the U.S. and had to be printed in Paris in 1934.

That was the same year Dick began receding from American culture: The name steadily grew in popularity from 1911 to 1934, jumping to No. 138 on the SSA baby name rankings from No. 484. In 1935, Dick’s rank regressed to No. 142 and it fell one spot the following year. Since then, it’s been in freefall.

Instead, parents began calling their Richards “Ricky” in the 1950s, Evans says, a nickname shift inspired by two of the most famous television characters of that era: Ricky Ricardo (Desi Arnaz) of I Love Lucy and Ricky Nelson (played by himself) in The Adventures of Ozzie and Harriet. In 1940, Ricky was the 926th most common boys’ name. Eighteen years later, 1958, it was No. 34. (Interestingly, Ricardo played a bandleader on his show, and Nelson was the son of real-life band leader Ozzie on his show.)

But the death of Dick was a gradual one, according to Jennifer Moss, CEO of Babynames.com and councilwoman for the American Name Society. “Starting in the early 70s is when it started really falling out of style.”


The timing suggests the name suffered from a second negative association: using the word “dick” to describe “a stupid or contemptible guy,” Adams says. Lighter pinpoints the birth of this usage to 1966, when Norman Bogner used it in his novel Seventh Avenue. After Uncle Don delivers a bloviating speech about the limits of free speech, Fish turns to Neal and says, “He’s a dick.”

The rapid decline in popularity in the ’70s was possibly due to a negative association with a very famous Dick: Richard “Dick” Nixon, the U.S. president from 1969 to 1974 who was, by all indications, a raging dick. Just a bit of his dickish behavior: Dick Nixon orchestrated Watergate, perhaps the greatest political crime in our nation’s history, and remains the only U.S. president to resign from office.

But other linguists say Nixon’s negative influence on the name was minimal, and he was hardly the only president to render his name toxic — historically, all presidents have had an adverse effect on the popularity of their own names, Evans says. “Lyndon Johnson was the last president to have a positive influence on his name while in office. After that it became gauche to name a child after the sitting president, and it’s about the same with first ladies.” (Indeed, the name Lyndon jumped in popularity after Johnson assumed the presidency in 1963, following the assassination of John F. Kennedy, jumping from the 593rd most popular boys’ name in the U.S. in ’63 to the 348th in 1964.)

Johnson can also be used as slang for the male reproductive organ, of course, as can the boys’ names Willy and Peter. But none are as closely associated with the male member as dick, which Evans ascribes to the phonetics of the word. The hard K sound makes dick sound more forceful, and thus more functional as an expletive.

“In the same way ‘fuck’ is a great phonetic expletive, dick is a great expletive,” Adams says.“The sound structure of the word is great for saying someone is contemptible because it has that expletive quality to it.”

Five years after Lyndon hit its peak popularity, in 1969, Dick fell out of the top 1,000 most popular boys’ names and hasn’t been seen there since. Richard retained much of its popularity, however: From 1920 to 1970, Richard was among the top 10 most common baby names for boys born in the U.S., according to the SSA. 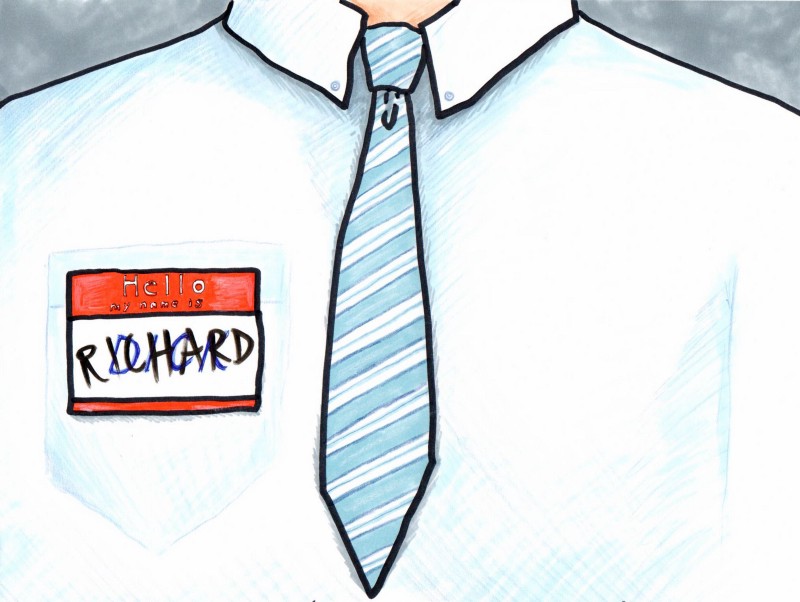 Dick as a pejorative has become so ingrained in American jargon over the past several decades that Moss doubts any parent would ever again choose the nickname for their son. “There would be a high teasing factor, and a lot of parents consider that when naming their babies,” she says.

Life can be just as hard for grown men who have gone by Dick their entire lives. “Most younger men who are named Richard have deliberately gone to Rick or Rich so they don’t have to deal with it,” says Frank Nuessel, a professor of Spanish at the University of Louisville and linguistics expert who wrote The Study of Names.

Nuessel recalls a colleague who recently requested friends and colleagues stop calling him Dick. “When I first met him many years ago, his name was Richard,” Nuessel says. “Then he decided to go by the name Dick for, I wanna say, three decades. Then three, four years ago he informed all his colleagues and friends he preferred to go by Richard. … Nobody I know calls him Dick now.”

My grandfather’s eldest son (my uncle) was also named John Richard McDermott. He mostly went by Rich, though, and he was certainly never a Dick (uppercase, lowercase or otherwise).

This was mainly thanks to my grandmother, who accosted anyone who referred to him as Dick. There was a short-lived effort on the part of some relatives to call Rich “Little Dickie,” which my grandmother put a swift end to.

Rich isn’t sure why his mom was so adamant he not be called Dick (and, unfortunately, plying this information from grandmother would be next to impossible at this stage of her life). He’s just thankful she did.