“I have no interest in retirement,” Leon Dash says from his office in Gregory Hall, on the University of Illinois campus in Urbana-Champaign.

At 72, Dash has, by all accounts, lived an exceptionally full, successful life— one that more than merits a comfortable retirement.

Dash spent 30 years as a reporter at the Washington Post, where he won the Pulitzer Prize in 1995 for his eight-part series about the struggles of a poor black family in Washington, D.C. In 1977, he sneaked into Angola and spent seven and half months embedded with guerrillas fighting in the Angolan Civil War.

Back in Washington, he was a civil rights champion, helping file a racial discrimination complaint against the Washington Post, his employer, before the Equal Employment Opportunity Commission in 1972. Dash was so upset by the racism in the newsroom that he went to editor-in-chief Ben Bradlee’s house late one night and browbeat the famous editor in his own home.

He now holds an endowed chair at the University of Illinois, where he is as beloved by his students as he is feared. He is the author of two books, and he’s won an Emmy. 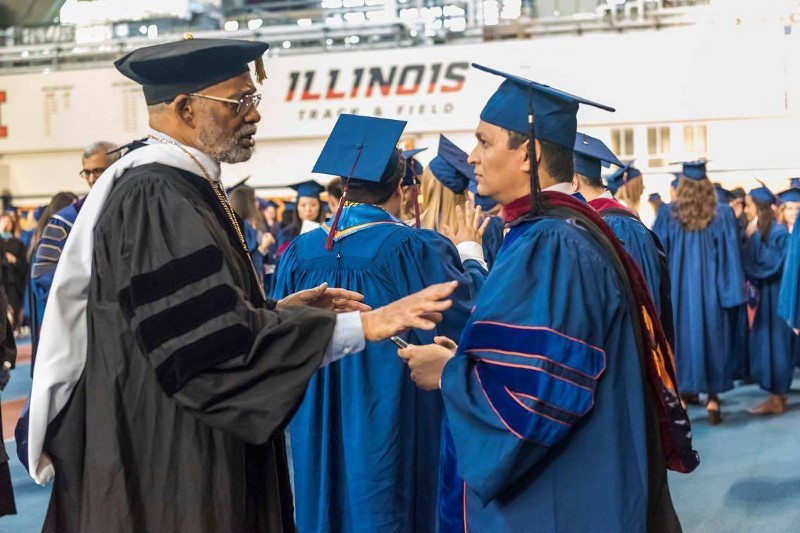 Dash (left) with a former student at graduation this May.

But Dash has no plans to slow down. If anything, he’s speeding up — he plans to teach three classes this fall instead of his usual two. And that’s on top of working on a new book, a nonfiction work about the moment certain Americans became aware of their whiteness or blackness and what that meant within the context of American culture. He’s flying to New York City next week to conduct some interviews for it.

“I don’t see retirement as something attractive,” Dash says, with characteristic bluntness. He says his main reason for delaying retirement is that he still has the passion and capacity for his work. “I just met with my physician on Monday, June 6,” Dash says. (He has a knack for remembering dates.) “And [my doctor] said I’m in excellent health. He thought I was retired. I said, ‘No, I’m not retired.’ He said, ‘Okay, keep going.’”

But Dash doesn’t just continue working because he’s healthy; he also works to maintain his health. He’s seen friends settle into sedentary lifestyles post-retirement, and he’s determined not to suffer the same fate.

“My friends who have retired at 62, 65, I’ve watched their health deteriorate significantly over the last several years, both mentally and physically,” Dash says. “I’d rather have a reason to get out of bed every morning.”

The ideal is for retirement to be a period of rejuvenation and relaxation. After 40 years of work, people finally get to enjoy their time and hard-earned money.

The reality is that it often leads to a severe decline in mental and physical health. Retirement “raises the probability of poor health,” increases difficulties with mobility and worsens mental health, according to a March 2006 study from the National Bureau of Economic Research. Other studies have found retirees are 40 percent more likely to have a heart attack or stroke than their working peers, and that retirement increases the probability of depression by, coincidentally, 40 percent.

And these effects can be particularly pronounced for men.

“Men tend to plan financially for retirement, but they don’t plan for their lifestyle, what they’re going to do [after retirement],” Phyllis Moen, professor of sociology at University of Minnesota, says. “Men think about [retirement] like an extended vacation, but after a couple of months that gets old, and they’re at loose ends.”

Much of the discontent men feel post-retirement has to do with the gender norms regarding men and work. Men are still socialized to be the breadwinners, and their sense of self is often deeply tied to their work. So when their careers end, they often suffer a crisis of purpose.

This would explain why depression and marital strife are so common for retired men. Moen’s research has found retirement can strain relationships, as many couples are unaccustomed to spending so much time together. Marital conflict is especially high among retired men whose wives continue working, as the husband tends to feel emasculated by his wife’s being the sole financial provider.

Retiring can also have a severe impact on men’s social lives, Moen says. Adult men are depressingly bad at maintaining friendships, so their co-workers are the closest thing they have to meaningful companions. “Suddenly no one’s calling. They have no real place to go. They might go to lunch with their old coworkers only to find they no longer have a place there,” Moen says.

Indeed, the study from the National Bureau of Economic Research found that a vibrant social life can mitigate the negative health effects of retirement.

Somewhat ironically, all the rest that comes with retirement has a profound negative influence on physical health, too. When men retire, they often simply lose the will to live, and that elicits a palpable decline in physical health. “Their health declines because they just don’t have a reason for getting up in the morning and getting out of bed,” Moen says.

It’s a phenomenon Dash knows all too well. Lately, when he returns to New York City, his childhood home, he has trouble prying his friends away from their televisions.

“[My friend] worked for the New York Board of Education. And his world has grown to be very small [post-retirement],” Dash says. “He stays to himself. … We’re the same age, and he’s slowed down considerably.”

Others have fared even worse — one of Dash’s retired friends died in his sleep in October 2010, just five years after retiring. “He had stopped living years before,” Dash says. “Somehow he had lost the spark and the interest and the motivation to live.”

For Dash, an added benefit to continuing work is that it helps him stay “up with the contemporary world.”

“I wouldn’t be adroit at social media [if I retired],” Dash says. Students have introduced him to Facebook, Instagram and Twitter in recent years, and he maintains an active presence on each. On Facebook, he found a group called Dash Survivors, a select group of students who passed Dash’s infamously tough Reporting II journalism course. “The most recent app I’ve loaded onto my iPhone is Snapchat, and I learned about that from my students, as well. It’s really more popular among students than Twitter or Facebook.”

Dash boasts that when he walked into his dry cleaner the other day, the owner told him he’d be eligible for a senior citizen discount in a few years, when Dash turned 62. Dash was quick to tell the shop owner he was already 10 years older than that.

Dash plans to continue defying people’s expectations about his age and determination.

“My younger daughter, she’s been harassing me about retiring,” Dash says. “So I gave her a date: When they carry me out of Gregory Hall, I’ll retire.”